Regent of the Mask

Expressing his love of theatricality and theaters.
Harnessing his magic.
Controlling the Grip of Murder curse and afflicting it's psychic agony on it's victims.
Helping the Lords of Alchemy.

Help the Lords of Alchemy in remaking the Earth.

Theodore Higgins, better known as the Regent of the Mask (in Japanese: 仮面の導師 Kamen no Doushi; Monk of the Mask) is the secondary antagonist turned anti-hero of Ninja Gaiden 3: Razor's Edge (also known as Ninja Gaiden 3). He is an alchemist, an archenemy of Ryu Hayabusa, and a major member of the influential and powerful cult known as Lords of Alchemy. He is also one of the members of the Lords of Alchemy who also learned the deadly curse known as the Grip of Murder.

The Regent of the Mask wears a long red robe with two belts around his waist. Underneath, he wears gold and black armor. His face is completely covered by a mask that is white and gold. The only part of his face that is visible are his eyes, which are a very light blue. However, when he reveals his true identity at the end of the game, he is shown to have a very handsome face and shoulder-length blonde hair. His weapon of choice is a rapier sword that seems to be Western-style as opposed to Ryu Hayabusa's Dragon Sword.

His real identity is Theodore Higgins, and he's Cliff's brother. Years ago, he married Saya, Mizuki'ssister, and together they had a daughter, Canna. But a year before the events of Ninja Gaiden 3, Theodore and Saya died in an accident. However Cliff brought Theodore back to life and transformed him into the current Regent of the Mask, controlling him with the mask that covers his face as he now serves his brother, but also his group of dangerous people known as the Lords of Alchemy, and their leader, who is named Ashtear Higgins who is the grandfather of both Theodore and Cliff.

slaughters the Prime Minister. After a battle ensues, the super ninja manages to wound the alchemist by heavily slashing the dragon sword through his body. The alchemist surprisingly manages to cast a curse into Ryu as he chants the cursing spell, while the ninja's sword is still through his body, and then leaves Hayabusa with the powerful Grip of Murder curse on his arm, infusing the Dragon Ninja's sword into his hand with the rage and hatred of those he killed.

The Regent then appears on a news broadcast demanding that every country in the world surrender to his group known as the Lords of Alchemy with the deadline being seven days (a reference to the seven days of creation of the universe in monotheistic religions).

The Regent appears before Ryu again on a top of an abandoned modern skyscraper within the Rub' al Khali desert, revealing his status as an alchemist and the nature of the Grip of Murder. He taunts the ninja with talk about all of the lives he has taken. Having enough, Ryu tries to strike the Regent down, but discovers that he is a mirage, an illusion. The Regent disappears, leaving a powerful helicopter for Ryu to fight.

At the LOA laboratory on Abismo Island, the Regent appears yet again, revealing to Ryu that the dinosaurs inside the giant capsules are clones from fossil cells. They were created to make business (with dinosaurs as pets to many human children all over the world) and to see if humans were capable of being cloned. Then the Regent unleashes a gigantic T-Rex on Ryu to fight. After the ninja defeats the dinosaur, the Regent comes forth, this time with Mizuki as a hostage. He forces Ryu to surrender, but as the ninja surrenders and walks backwards, Mizuki then shot Ryu and he drops unconscious. The Regent has a fellow elite Lord of Alchemy named Lovelace throw Ryu into the virtual stimulation environment. But after the ninja escapes, rescues Canna, and finds the "egg of a god", the Regent appears again, holding Mizuki. However, Mizuki breaks free and reunites with her daughter. The Regent then reveals to Ryu that he wishes to see a new world with a new god. Much to everyone’s surprise, the Regent mercilessly pushes Lovelace into the egg’s container, thinking that she would add something to it, and watches as she transforms into a prototype god. Although admitting that it is imperfect, the Regent proclaims that it is still mightier than any man. He then leaves Ryu to fight Lovelace, escaping from the lab before it self-destructs.

On the Black Narwhal, the Regent appears once more against Ryu when the ninja finds him in front of a gigantic capsule containing Canna and an egg. Declaring that it is the "final act", the Regent pulls his sword to battle Ryu. After a long battle, Ryu defeats the Regent and slays him, slicing his mask in half and revealing his face. Cliff then appears and reveals to Ryu that the Regent was actually Theodore Higgins, Canna's father. Since Theodore was killed by Ryu right in front of Canna’s eyes, this event triggers her anger and causes her to merge with the egg, transforming into the Goddess.

However, Theodore somehow survives the battle and regains his mind. He appears in Tokyo, saving Ryu and Mizuki from Cliff and delivering a fatal blow to his brother. After Cliff dies, Theodore does not answer any of Mizuki's questions and instead tells her to get her wounds treated, which she reluctantly complies.

Theodore accompanies Ryu as he gets closer to Canna. However, to Ryu's surprise, Theodore turns on him and draws his sword, proclaiming that as Canna’s father, he cannot allow Ryu to kill her, protections his only child from harm's way. The two of them fight each other once more, and once again, Theodore loses as Ryu cuts through his body. All of a sudden, Theodore begins chanting an ancient Slavic incantation, and in an instant, the Grip of Murder disappears from Ryu's arm. The super ninja realizes that Theodore wanted him to fight and kill him. With his last breath, Theodore pleads for Ryu to save Canna and the world before he dies.

Theodore was a loving father and husband who had disagreed with his brother and grandfather's ideals. After being killed and brought back to life, he became a servant to the Lords of Alchemy with the pseudonym of The Regent of the Mask and and set out to help them in their cause for a new world. The current Regent is sadist and is constantly taunting and infuriating Ryu Hayabusa. He believes that he and Ryu are the same in the sense that they are dark assassins who have killed many for their cause. 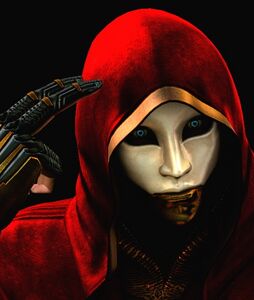