Dimwitted Poachers
Reggie, Darnell and Two Fingers are minor antagonists of the 2009 Disney film The Princess and the Frog, which is based on the 2002 children's novel The Frog Princess by E.D. Baker and the German fairytale The Frog Prince by the Brothers Grimm. They are a family of hillbilly frog hunters who surf around the Louisiana Bayou.

The three hunters were known to hunt down frogs to feast upon, as Reggie (being the leader) leads his sons (Darnell and Two Fingers) to search around the Bayou. They were first seen encountering Tiana and Naveen (who both have been turned into frogs by Dr. Facilier). Reggie was able to capture Naveen while Darnell was able to capture Tiana, but a firefly named Ray manages to help Naveen escape by attacking Reggie's nose, much to the latter's annoyance.

In order to save Tiana, Naveen jumps on Reggie, tricking Darnell to whack Reggie with a giant stick and Two Fingers to shoot down Reggie's pants, exposing his underpants. The three engaged into a fight while trying to catch Naveen to no avail, suffering numerous hits and allowing Tiana to go free. Reggie realized that the frogs are way too smart, to which Tiana obliges by saying that she and Naveen can speak as well.

Horrified to see that the frogs can actually talk, Reggie, Darnell and Two Fingers panic in fear and rowed away in their boat, never to be seen again.

In the game storyline taking place after the events of the film, Reggie, Darnell, and Two-Fingers are shown to have and apologize to Tiana for the mistreatment they gave towards her, as they did not realize that she was actually human magically transformed into a frog. Nevertheless, Tiana accepts their apology and welcomes them into her restaurant, along with her other friends, acquaintances, and relations.

In one of the mini-games, which takes place during Tiana and Naveen's adventure as frogs, the trio serves as antagonists. 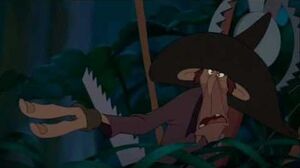 The Frog Hunters Scene (Full)
Add a photo to this gallery

Retrieved from "https://villains.fandom.com/wiki/Reggie,_Darnell_and_Two_Fingers?oldid=4139698"
Community content is available under CC-BY-SA unless otherwise noted.