Villains Wiki
Register
Don't have an account?
Sign In
Advertisement
in: Mature, Male, The Walking Dead Villains,
and 11 more

Reggie is a minor, yet pivotal antagonist in the comic series, The Walking Dead. He was a criminal and responsible for shooting Rick Grimes and placed him in a coma. He serves as the secondary antagonist of Volume 1: Days Gone Bye.

He was voiced by Phil LaMarr in the motion comic.

There is nothing known about Reggie's past but a criminal who escaped from prison in Grant County. Officers Rick and Shane were called into action and encountered Reggie, who stated he would die than returning to prison. After Rick takes cover, he ran off and attempted to flank and cornering Reggie. But after he bolts from cover, Reggie shoots Shane's hand and Rick in the chest to prevent the former from giving the latter cover fire and placing him into a coma.

It's unknown what happened to Reggie with his shootout with Rick and Shane but somehow escape from justice and made it to Atlanta. During the outbreak, he died to unknown causes and reanimated as a zombie.

Later, he and many other zombies attacked the Atlanta camp and bite Amy. He is then killed by Shane. 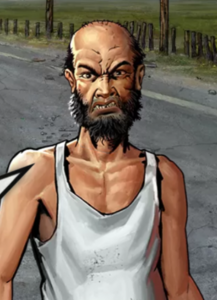 Reggie in The Walking Dead: Road to Survival.

Reggie in The Escapists: The Walking Dead.
Community content is available under CC-BY-SA unless otherwise noted.
Advertisement