Get revenge on everyone involved in Ragyo's death (failed, abandoned).

Rei Hōōmaru is Ragyō Kiryūin's secretary at the REVOCS Corporation and a supporting antagonist in the 2013 anime Kill La Kill. After Ragyō's defeat she reappears as the main antagonist of the OVA, later becoming a supporter of Satsuki Kiryūin.

She was voiced by Ayumi Fujimura in the Japanese version, and Cristina Valenzuela in the English version, who later voiced Ladybug's nightmare counterpart in Miraculous: Tales of Ladybug & Cat Noir.

Rei is a young woman with dark skin and light purple hair in locks. She wears a white business suit, consisting of a necktie, collared shirt, shorts, thigh highs, and pumps, and gold earrings. Whenever she is near Ragyo, she wears aviator sunglasses inherited from her.

Rei is mostly serious and professional at times, but also makes some remarks about Ragyo sometimes. She never objects Ragyo's character and decisions due to the fact that she was saved by Ragyo. Rei is very loyal to Ragyo and always takes risks for her. She even offered to be a final sacrifice for the Shinra-Koketsu leading Ragyo to get the full power of Kamui.

After Ragyo died, she decided to take revenge. Going from calm to filled with rage, she wasn't heartless at all even though she attacked all the protagonists. She even accepted Satsuki's offer.

20 years ago, Rei was an African child whose hometown was in a civil war. Ragyo slashed the limbs off of the people who attempted to kill Rei and saved her because she found exactly what she was looking for: a person with high Life Fiber compatibility. Ragyo took her in and gave her the name, Rei Hōōmaru.

She had loyally served the REVOCS Corporation and had obeyed everything Ragyo had ordered, even though she had full knowledge of Ragyo's intentions. Rei was absorbed into the Shinra-Koketsu as a sacrifice but was ejected by Senketsu when he created a hole in Ragyo. She landed in rubble, then escaped without the others noticing.

After the death of Ragyo, Rei decided to get vengeance on everyone responsible, unaware that Ragyo actually committed suicide. She used the remaining life fibers at REVOCS Corporation to make clones of Satsuki and the Elite Four. At the "First Graduation Ceremony", the clones captured Satsuki and Mako Mankanshoku, and Rei transformed the whole academy into a huge war machine.

Rei and the clones were defeated by Ryuko Matoi and the rest of the academy. She returned to the captured Satsuki and Mako to try and kill them. She attempted to stab Satsuki with a knife but only cut her hair and the side of her neck. Satsuki mentioned to Rei that she "can't imagine the hell she had lived though because people don't understand, the world needs you". Rei replied, saying that she's not making any sense, to which Satsuki commented, "That's who we are." Rei then puts down her knife and accepted Satsuki's offer and joined Satsuki to leave the sinking Honnō City. 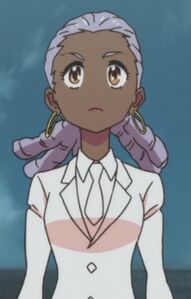 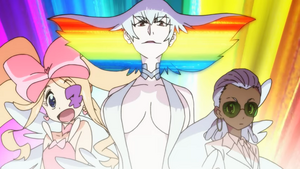 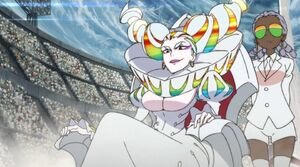 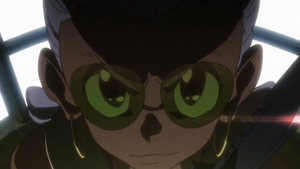 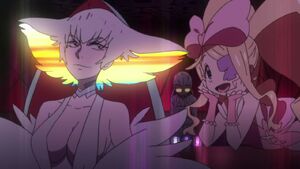