Devour the aardwolves (both failed).

She is voiced by Ana Gasteyer.

With the use of her son Dogo (who had fooled Kion and The Lion Guard with his cuteness into a thinking he was nice after they saved him from Janja), Reirei, her husband and other sons enter The Pride Lands from the Outlands during the celebration of Kupatana (which is a day of peace) which Reirei plans to take advantage of in order for her and her family to feast.

When Kion attempts to find Dogo amoungst the jackal pups that are making themselves at home in aardvark borrows, Reirei steps forward and introduces herself and Goigoi as Dogo's parents. Reirei then appeals to Kion to let her and her family stay in The Pride Lands as Dogo can't stay on his own and be away from his family, to which a reluctant Kion agrees but only if she promises to stop stealing from the aardvarks. However, when The Lion Guard leave, Reirei and Goigoi fantasize about the animals they can snatch during Kupatana. But when Dogo expresses concern about The Lion Guard stopping their schemes, Reirei sings "Jackal Style" to teach her family how to act like jackals. The family steals from many of the residents of The Pride Lands and land in trouble with the angry animals.

Kion and The Lion Guard hear of Reirei's schemes and confront her, where Kion lectures Reirei for stealing. But Reirei claims that The Pride Lands' customs are different from theirs and asks if her family can participate in Kupatana. Kion allows the jackals to join, but only if they treat the other animals with respect.

During Kupatana, Reirei and her family start their hunt. Kion and his father Simba implore the animals to work together to fight off the jackals before Kion joins The Lion Guard in wrangling the jackals. Reirei and her family are then cornered by the group, where Kion orders the family to return to The Outlands. Reirei (using dramatic flair) pleads for a second chance but leaves with her family when Simba roars at them.

After noticing a group of aardwolves in a cave in the Outlands, Reirei and Goigoi plan to eat them. Upon hearing that The Lion Guard drove the aardwolves out of the Pride Lands (after mistaking them for hyenas), Reirei tricks the group into trusting her and Goigoi by saying that they are not like The Lion Guard and sing "We'll Make You a Meal".

Reirei and Goigoi then trap the aardwolves in the cave and prepare to devour them, planning to give whats left to their children. Luckily, The Lion Guard arrive just in time to save the aardwolves. Kion pins Reirei and orders her to go home, which she and Goigoi do.

Reirei is secretly watching Muhimu's Herd graze nearby, when she slinks down to speak with her children. She tells Dogo and Kijana that it's time for them to try out a technique that they have been practising - luring a young one away from the rest of the herd to strike it down while the older jackals chase away the older zebras. She puts her plan into action and, upon spotting a young zebra, directs her youngest children over to him.

Reirei chases the other zebras alone, when one of them catches their foot on a protruding rock and slams into the ground, skidding to a halt in front of a large boulder. Reirei approaches her, but Kion reveals himself from behind the boulder and warns Reirei that she's the last one left. She appears surprised by this revelation, but is pinned to the ground by the young lion cub before she can do anything. Kion releases her and joins the herd which has finally calmed down. Bunga delivers her two youngest children back to her, while the others gather around Reirei. She overhears how Hamu kicked Dogo away, and after asking Kion if he heard what they just stated, Kion assures her that she'll be safe from the 'vicious' zebras when she returns to the Outlands. Slightly irritated, Reirei calls for her kids to follow her. When Goigoi doesn't follow, she angrily calls for him as well.

Later, Dogo and Kijana train under their mother's guidance. She orders them to get the little one away from the pack, but with only their father and two older siblings in front of them, they hesitate. Goigoi offers to play the role of the little one, which Reirei responds to warmly. She quickly urges her children to run him down and they do so, alarming Goigoi as they approach. Once they successfully pin their father down, Reirei praises their performance, believing that it's time for them to return to the Pride Lands. Kijana voices her concern over the Lion Guard, but Reirei tells her that she will deal with them herself.

Reirei returns to the Watering Hole and watches from behind a nearby rock. She orders her pack to move on since the older animals won't be good for training, but recoils when she hears Muhimu mention the little ones. She overhears Twiga mention that they're at Hakuna Matata Falls, and decides that it would be perfect for her children. Before he can leave with them, she tells Goigoi to halt the Lion Guard whilst the rest of them go after the youngsters, assuring him that they'll leave him a tidbit before swiftly leaving with the kids.

At Hakuna Matata Falls, Reirei and her pack watch the youngsters play under the guidance of Bunga. Reirei tells her children not to worry about Bunga, since she'll be taking care of him. Dogo asks his mother if they'll save some food for his father, and she replies that they will with insincerity. Reirei and her family soon step in to spoil the cheerful atmosphere, where Reirei pins Bunga to the ground. After the kids start to attack her children, Bunga briefly gets away from Reirei to cheer them on, but is caught again shortly after, where the mother announces that she is positive that their training will secure their victory.

Soon, Bunga declares victory over Reirei's pups. She halts her attack in disbelief, and Bunga joins the children tocharge the jackal family one last time. The Lion Guard arrive just in time to see the jackals' defeat. Reirei soon grabs Kion's attention, complaining about how her family have been treated and asking for his help. Kion is sure they can help, provided that they leave and never try to attack the kids again. When freed, Reirei claims that she doesn't wish to stay where she's not wanted, and the kids warn her away. She and her family then run back home, defeated.

Reirei and her pack chase some pangolins in the Pride Lands but get defeated by the Lion Guard. The guard notices that they're heading towards the Outlands with Janja's clan. Scar orders Janja's Clan and Reirei's Pack to take down Rafiki. Tamaa tries to distract them but gets caught. The Lion Guard fight them in a battle.

Reirei's Pack becomes part of Scar's Army led by Scar and traps the Lion Guard. however they are beaten by the roar.

True to her species, Reirei is intelligent, unscrupulous, traitorous, deceptive, clever, and sly, with no thought for other creatures. She is not above using her own children to get her way, as she uses her son, Dogo, to sneak her family into the Pride Lands. Despite this, she treats her pups with an appropriate amount of affection and caring, and is deeply prideful in teaching her children the two-faced nature of the jackal. Conspiring, duplicitous, and manipulative, Reirei is charismatic and attractive, so she can pull off an act of innocence until she pushes her luck too far. Unlike the Outlanders like Janja or Mzingo, who understand that there is no such thing as a free meal, Reirei uses thievery and deceit to get her next meal. 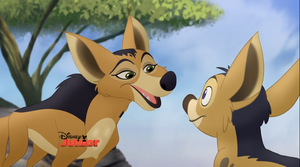 Reirei with her son, Dogo. 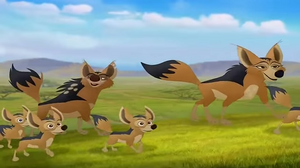 Reirei and her family.

Reirei with her husband Goigoi and their son, Dogo. 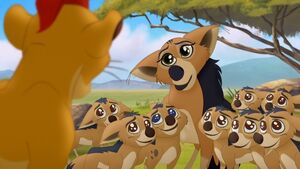 Reirei and her sons acting cute to Kion. 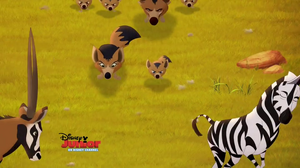 Reirei and her family attacking The Pride Lands animals. 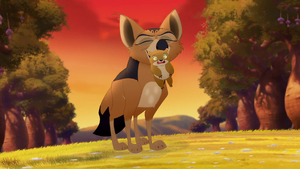 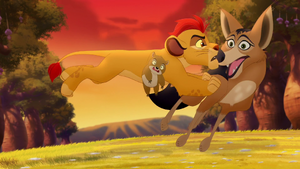 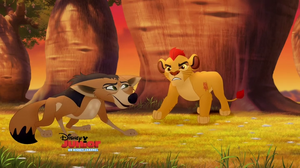 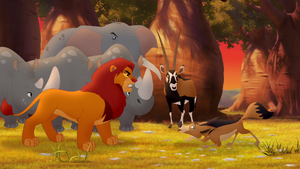 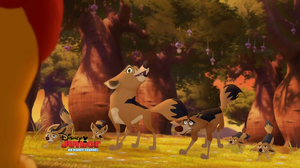 Reirei and her family preparing to leave after being roared at by Simba. 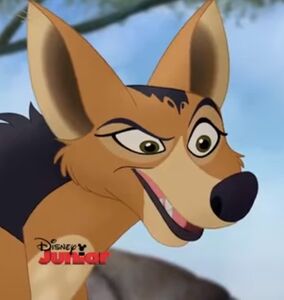 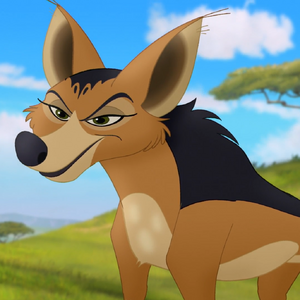 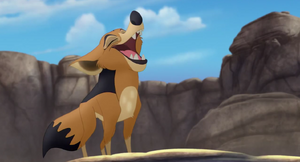 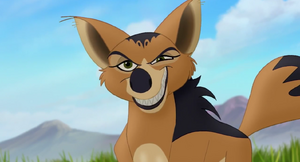 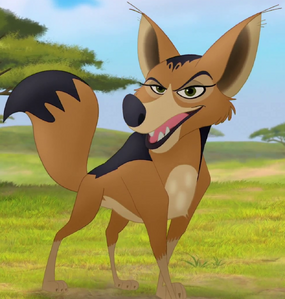 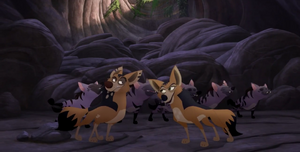 Reirei and Goigoi tricking the aardwolves into trusting them. 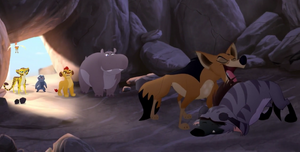 The Lion Guard arriving to stop Reirei eating the aardwolves. 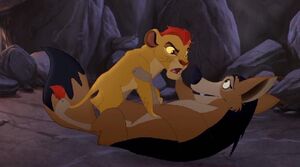 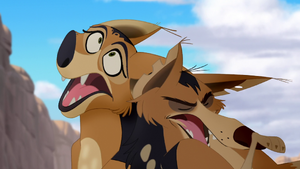 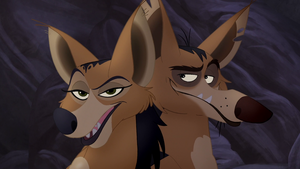 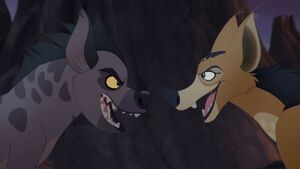 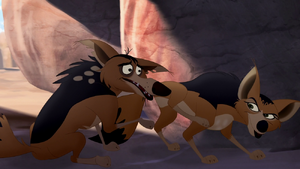 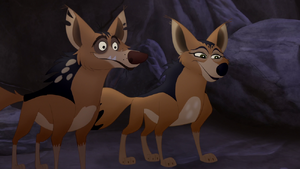 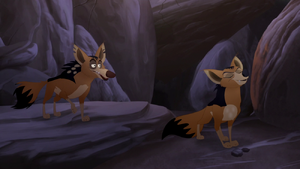 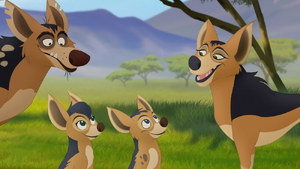 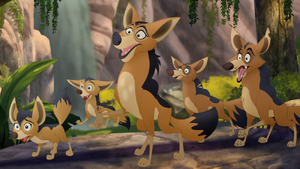 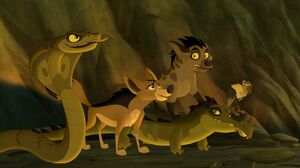 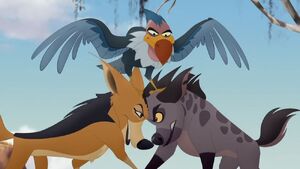 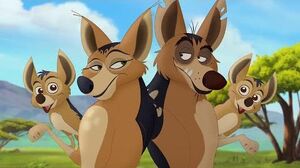 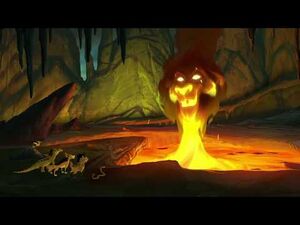