Seeking all kinds of shushus.Plundering.

Free his brother from their curse (ongoing).

Have all the possible Shushus and become stronger with them.
Take revenge on Yugo and his friends.

Remington Smisse is a supporting antagonist in the second season of Wakfu. He is one of the members of the Smisse family and he is a hunter and collector of Shushus, wielding a number of them in various forms of weapons. He is accompanied by a talking Bow Meow named Grany whom he calls brother.

Positively sly, cunning, and manipulative, he will employ any dirty trick to get the upper hand and is virtually dishonorable, willing to stab anyone in the back. He comes into opposition against Evangelyne to steal Groufon and then in a fight over Percedal when he was trapped in Rubilax's sword form. Despite his trickery, he is quite kind, charming, and overprotective of his brother Grany. While trapped in the Shushu realm and as they were about escape instead of leaving his brother who straggled behind he instead stayed and risked his life to save Grany.

Remington, from a young age, was never recognized as a true rogue by his father. Because of this, Remington decided to self-stab himself to show him what he had inside a father, making him fall into his toy in order to be the pride of his family, along with his brother Grany. From this, the two brothers are a team, complement each other like nail and grime !, so much, that these were pencils to draw the attention of the demigod ecaflip Ush Galesh. Because of this, Ush would have a servant assign them a mission to defeat him.

All right, until you face the brothers. Nothing went well from there Grany was bitten by the apple and transformed into a Meowmeow. But a difference from his father, Remington never leaves his family, and leaves in search of some way to give back its original form.

Eva dodges the attack, and Remington ends up destroying the ledge he was hanging onto and plummets to his

apparent death. However, it is revealed that he did survive the fall in Episode 8 of Season 2.

He later meets Eva and her friends again in a prison that belonged to Justice Knight. While there he offered the team advice how to breakout. Instead of thanking them he instead released an extremely powerful Shushu named Anathar. Later on, he, Sadlygrove and Yugo are taken to the Shushu world. He is left behind while the others escape so he could save his brother, Grany.

Remington and Grany are later seen in Episode 20 Zinit as Rushu's personal slave/masseur, until they escape through the Shushu invasion portal. At the end of the Battle of Crimson Claw Archipelago, Remington takes Eva hostage in exchange for Rubilax (in sword form), but is defeated and both are knocked in the sea, presumed to be dead. However, they're last seen sailing into the sunset in a wrecked submarine.

Remington will make a new appearance in episode 2 of the 2014 OVA series. He is at the service of the new reincarnation of Ush Galesh who has visibly promised to give back to his brother Grany in return for his services. In this episode his mission is to prevent Yugo from recovering two Dofus. Unfortunately for him, the Ush warrior team was beaten and he finished knockout. The story does not say if, following this failure, Ush still agreed to lift the curse of Grany 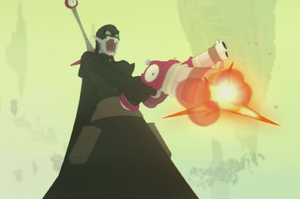 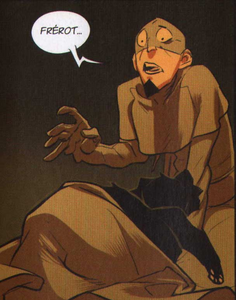 Remmington in the comics. 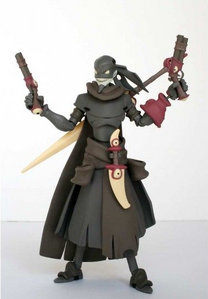 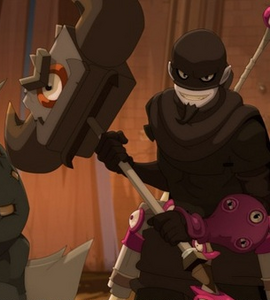