Trickery
Able to invade and influence the dreams of others

Turning dreams into nightmares.
Stealing Dream Mirrors from victims.
Attacking their enemies without warning.
Having fun.
Causing mischief and mayhem.
Conquering any worlds they traveled to.
Remaining immortal through the dreams of others.

Free Queen Nehelenia from her imprisonment.
Ensure that the Dead Moon Circus rule the universe.

The Lemures (in Japanese: レムレス), also simply known as the Remless, are freakish and evil monsters that also made up the rest of the Dead Moon Circus and they were used by both the Amazon Trio and Amazoness Quartet during combat against the Sailor Scouts, though their nature was quite different in the anime than in the manga. In the English dub, they were referred to as "Remless"; though the name change was never explained, fans speculate that it could be a reference to their lack of dreams, as dreams come during REM sleep.

In the anime, when Queen Nehelenia, the ruler of the Dead Moon devoured the Dream Mirrors of her subjects in order to remain young and beautiful, they became the distorted creatures known as Lemures (Remless) that are the living ghosts of their former selves. When they were defeated with Sailor Moon's attack Moon Gorgeous Meditation, they would cry the words, "Stage out!", whereupon Lemures under the control of the Amazon Trio would fade away and those under the control of the Amazoness Quartet shattered, allowing their target's Dream Mirror to return.

In the manga, however, they were dark, formless creatures, similar to the lemures of Roman mythology.

Unlike most monsters (with the exception of Eugeal' Daimons), they are never directly involved in an evil plan to gather energy, take over crystal points, extract Pure Hearts, etc. The looking into the Dream Mirrors is done by their masters, and they are merely summoned to fight the Sailor Scouts whenever they try to interfere. They are summoned from shadow. All of them were destroyed by Sailor Moon's Moon Gorgeous Meditation except Karakuriko and Danko, who were destroyed by Sailor Moon's Super Moon Target, which is the preliminary attack for Moon Gorgeous Meditation before her transformation power is upgraded by Pegasus.

Remless often have appearances of things that would appear in a circus, like clowns, jugglers, or even balloons. As the show progresses, the Remless get more and more goofy, as pointed out by Sailor Moon and Sailor Mini Moon during the fight with Ponko. The ones who resemble balloons seem to be related to each other.

The Remless sent by the Amazon Quartet (Amazoness Quartet) usually have repeated words in their names (like Garagara and Kerokero), and eat the dream mirrors once they are extracted, usually through an extra mouth on their chest. The mirror would be released unharmed whenever Sailor Moon destroyed them. Unlike the Amazon Trio's Remless, the Amazoness Quartet's Remless shattered into pieces violently, while the Trio's Remless cracked into pieces and disappeared.

It is ultimately revealed that they are the "living corpses" of the people of Queen Nehelenia, whose dream mirrors were taken by her. They were given to her seemingly willing, but it is unlikely they knew the cost allowing this. This is strongly hinted in their English name, "remless": 'rem' as in REM sleep, the state of sleep a person dreams, and 'less' meaning of course without.

In the Sailor Moon manga, most Lemures were small, dark, formless creatures which attacked in large groups. 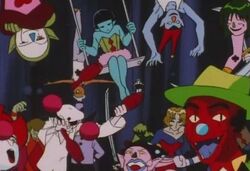 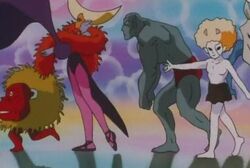 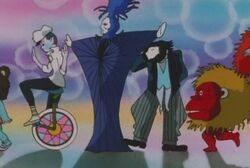 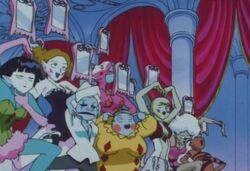 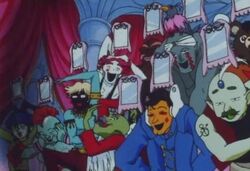 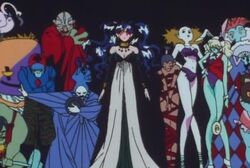 Queen Nehelenia forms the Dead Moon Circus after turning all the rest of the people in her kingdom into the Remless. 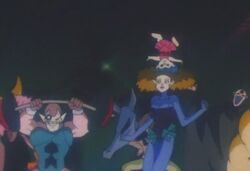 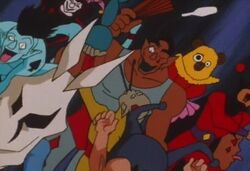 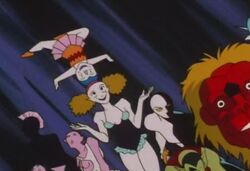 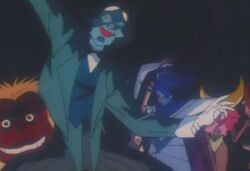 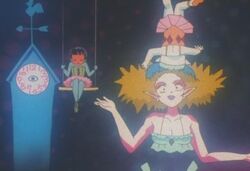 Retrieved from "https://villains.fandom.com/wiki/Remless?oldid=2868863"
Community content is available under CC-BY-SA unless otherwise noted.