NOTE: This article only covers Ren Amaki's villainous actions. For a more complete look at him and his heroic actions, go to his page on the Heroes Wiki.

Save Raphtalia's world from the Waves of Catastrophe (ongoing).

Become stronger (formerly).
Kill the dragon in a village to "save" its people and collect better loot.
Help Naofumi defeat the Pope and the Church of the Three Heroes (both succeeded).
Plunder for more power (under the Curse Series; formerly).
Break free from his curse series.
Get revenge on Myne.
Be with Eclair Seaetto.
Atone for his sins (all succeeded).

Ren Amaki, also known as the Sword Hero, is one of the main characters of The Rise of the Shield Hero. He also became the main antagonist of Volume 11 of the Light Novels, after he succumbed to the effects of his Curse Series.

After the Spirit Turtle event, Ren eventually lost his companions and his equipment because of Malty Melromarc's betrayal and manipulation, in the same way, she once betrayed Naofumi, causing him to be affected by the Curse Series of Greed and Gluttony.

After his descent into madness, he became a lead bandit, until Naofumi and his companions defeated him. After that, he decided to atone himself from his sins, including his misdeeds under the Curse Series' effects and his sins, in honor of his late companions, finally acknowledging them as people in the flesh. He was also the rival-turned-love interest of Eclair Seatto, the Female Knight.

In the anime series, he is voiced by Yoshitsugu Matsuoka in Japanese and Alan Lee in English, with the former also voicing Petelgeuse Romanee-Conti.

Ren is a sixteen year old teenager of Japanese ethnicity who stands at 5'2". He has blue eyes and black hair, befitting the image of a contemporary isekai protagonist, something Naofumi mentally made note of. According to Naofumi, Amaki is somewhat handsome and androgynous.

Ren always dresses in black or some other dark color. His basic adventuring gear consists of navy blue trousers, a white and black overcoat, a navy blue scarf, and black gloves. As protection, Amaki adorns a black chestplate, black shin guards, and a spiked black pauldron on his right shoulder.

Amaki is very anti-social, preferring to work alone in most situations. He treats his party more like a resource than trusted colleagues, only requesting their help when up against an opponent he can't defeat. He originally treated the fantasy world like some kind of video game, not taking any of the stakes completely seriously. That being said, Ren was able to understand the consequences of his actions after the zombie dragon he killed caused a plague.

Before his infection by the Curse Series, Ren was less inclined then Itsuki and Motoyasu to treat the Shield Hero with contempt. He stood up for Naofumi when Motoyasu and Malty tried to secure the release of Raphtalia through cheating.

At the beginning of the story, Ren used to be a VRMMORPG gamer from an alternate Japan before he was summoned to the Kingdom of Melromarc as the Sword Hero, one of the four holy heroes summoned in Melromarc. Like other Heroes aside from Naofumi, Ren's role was initially both supportive and antagonistic before his redemption and character development.

At the beginning of the series, Ren is a person who acts aloof and tried to portray an image of a loner. He ran his party like a guild, treating his companions as NPCs and only working with the other members when the prey he seeks to kill was too strong for him alone. His particular attitude to this was that weaker members should work to individually increase their powers to catch up to the stronger ones.

Like the other heroes except for Naofumi, Ren once firmly believed that the world he was inputted was actually a game. Even so, originally, he bore no grudge against Naofumi. He and Itsuki also stood up for Naofumi after the latter lost his duel with Motoyasu (because Malty cheated and everyone around her acted with pure dissonance). Ren later went on a trip and started answering requests from a group of villagers from East Village, who claimed their village was harassed by a dragon.

After answering the call, Ren slew the dragon but left the body in the same spot, believing it would eventually disappear just like other video games. However, the body of the dragon kept decaying until it became a Zombie Dragon, while the decomposing process caused a plague broke out in the nearby area. Worse, the dragon named Gaelion was actually harmless. The people who made requests were actually slavers who asked the Sword Hero to slay the dragon so that they could keep Wyndia, a demi-human orphan found and raised by the dragon as his own daughter, as their slave. As a result, Ren unwitting ruined the life of a demi-human girl and doomed millions of innocent villagers because of his actions.

Later in the restaurant, Ren became aware that Naofumi caused his mission being canceled. After questioning Naofumi on it, Ren showed horror when Naofumi revealed that Ren's dragon slayer action had caused a massive breakout of plague in the village he arrived in. After seeing Raphtalia's wound, Ren started to believe him and apologize, much to Itsuki's confusion, as Itsuki refused to believe Naofumi's accusation that the rebellion he raised caused more problems.

Later in the Third Wave, Ren began to develop a curiosity to Naofumi after seeing him using the Shield of Wrath (one of the Curse Series formed during and after he absorbed the bones of Zombie Dragon) to defeat a monster and fought Glass, who interfered the fight.

During the manhunt caused by the Church of the Three Heroes' incrimination, Ren originally joined the army of Melromarc to capture Naofumi, believing he had captured Princess Melty as a hostage. However, he was soon persuaded by Naofumi and discovered the dark plots planned by the Pope. Ren later joined the group to defeat the Pope and witnessed Malty and her father, former King Aultcray Melromarc XXXII, was stripped from their royal status and renamed as "Bitch" and "Trash" respectively.

Even so, Ren still yet to fully reconcile with Naofumi and started to believe he cheated during his upgrade. He also started to show his arrogance, his most lethal weakness of his personality, when he was defeated by Eclair during a duel, stating no one would defeat him.

After his party was slaughtered because of the Spirit Turtle fiasco, Ren was hit hard and became more jaded, rude, coward, and cynical. He started to realize that the world wasn't a game and that his comrades are, in fact, dead and not coming back. However, Ren tried to blame them for being weak and started to escape from his own mistake. His distraught cemented his rivalry with Naofumi and Eclair further, calling the Shield Hero as a cheater before he escaped.

Later, Malty manipulated Ren by using his dismay and gave him false words of comfort that he desperately needed to hear. However, Malty stripped Ren of his belongings just like she once did to Naofumi. Finally heartbroken, Ren finally succumbed to the Curse Series of Greed and later Gluttony.

While possessed by Greed Series, Ren became a power-hungry bandit leader and organized them to amass wealth, stealing stuff from people but without killing them. After succumbing to Gluttony, this gets much worse, and he is willing to kill people to absorb EXP from them and grow stronger. However, Ren's obsession with power was hollow, possibly just an attempt to escape from reality. When asked the reason for doing the misdeeds, Ren could only express the purpose given to him by others: saving the world. After he was defeated by Naofumi, Ren was freed from his curse and started to express remorse over his atrocities.

After being freed from his curses, Ren decided to reconcile with Naofumi and his friends, no longer seeing him as a rival but a wise friend in need. He befriended Eclair and became her pupil, finally acknowledging her skills.

Realizing that it was his own mistake that caused him to lose his companions, Ren began to blame himself for the tragedy and decided to save the world from the Waves in the memory of his late comrades. He turned steadily more open, though he was still rather timid compared to before and no longer puts up any elements of false confidence or a cool facade. He even pointed out that he wanted to get to know the other Heroes and get along with them from now on.

In addition, Ren was no longer obsessed with power and diligently began studying under Naofumi in order to learn the world's language. He has also resolved to help out the village any way he can and asked Naofumi to be given a job there, becoming more and more modest in the progress.

Finally, Ren had expressed regrets over his past actions, especially when learning that the dragon he killed was the adoptive father of Wyndia, who was now freed by Naofumi and became his companion in his village. Still hating the Sword Hero for killing her father, Wyndia refused to forgive Ren unless he did something to save the world, of which Ren sincerely complied. 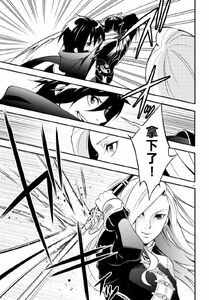 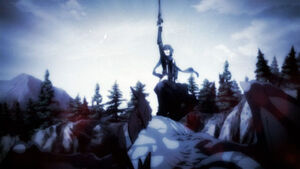 Ren slaying Gaelion without knowing that it was actually a harmless dragon. 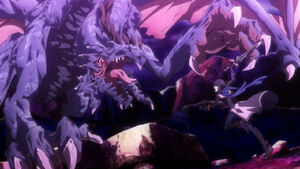 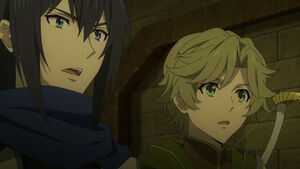 Ren shocked by Naofumi's revelation that the dragon he slayed had zombiefied and caused a plague outbreak. 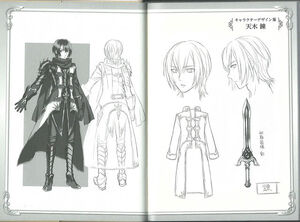 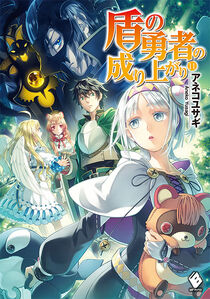 Ren with his Curse Series at the background of Volume 11's cover. 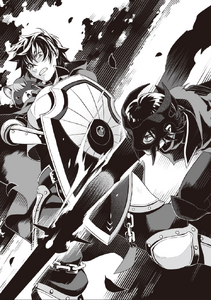 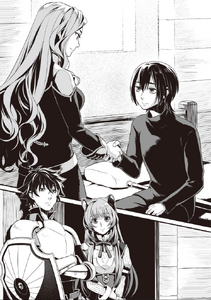