Sharp teeth
Ability to turn into a rabid beast

Cause others to suffer
Attack and kill Mr. Horse for calling him crazy (succeeded)

In the "adult-only" version of Ren & Stimpy, the abusive nature of Ren is even more evident. Due to being geared towards older audiences, the already dark and disturbing traits of Ren were able to be portrayed in even more graphic detail than in the original show.

He was voiced by series creator John Kricfalusi, also known as John K..

In the episode "Ren Seeks Help", we witness one of Ren's most disturbing and villainous moments as he visits Mr. Horse working a psychologist after a major quarrel with Stimpy over his abusive nature (one of the few episodes where Stimpy stands up to Ren). Ren recalls in graphic detail how as a child he experienced the trauma of being born and feeling pain for the first time, installing in him a hatred for all living things. He tortured small animals and killed them, until he tortured a frog that begged for him to kill it, Ren refused to do so in order to let the frog suffer a life of agonizing pain.

Ren then told the psychologist about how he first met Stimpy and how he hit him continually, eventually Mr. Horse sees how crazy he can be and then confronts him saying he needs to be locked up in a asylum away from decent normal people. Utterly agonizingly repulsed by Ren's sadistic insanity, he and Ren engage in an extremely graphic fight that is fatal to Mr. Horse as Ren becomes a rabid beast who beats the psychologist to death before being taken away by psychiatric doctors with dog-poles, but not before biting one of their hands off and eating it.

This episode and stands out as showing Ren in one of his darkest and most insane roles, even by "Adult Party" standards, and is likely the most infamous episode of the Adult Party revival.

In the episode "Stimpy's Pregnant'", Ren is repulsed by the idea of Stimpy being pregnant with his child (which was impossible, since both are male) to the point he was going to use a coat-hanger to abort the child, but he stopped after Stimpy stood up to him. Eventually, Stimpy persuaded Ren to let him keep the child.

Ren proceeded to abuse Stimpy, forcing him to do all the chores in the house (per usual) while he bragged to his own mother about how he (and he alone) had got Stimpy pregnant. Ultimately, it was discovered Stimpy was not pregnant at all but rather suffering from constipation. 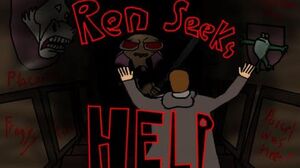