Villains Wiki
Register
Don't have an account?
Sign In
Advertisement
in: Outdated Articles, Friend of a Hero, Fallen Heroes,
and 35 more

Warrior in the Shuriman Army (formerly)

Renekton, also known as the Butcher of the Sands, is a villainous playable character in the multiplayer online battle arena game League of Legends.

Once the most esteemed Ascended warrior of Shurima, Renekton is now but a shell of his former self after millenia of psychological torment beneath the sands. Driven beyond insanity, Renekton is now a scourge upon the world as he seeks his brother Nasus, whom he blames for his imprisonment.

The 68th champion to be added to the game, Renekton was released on January 18, 2011. He is is most commonly played in the top lane.

He is voiced by Patrick Seitz, who also voices Kog'Maw in the same game. He also voices Dio Brando in JoJo's Bizarre Adventure, Garrosh Hellscream in World of Warcraft, Endeavor in My Hero Academia, Sloth in Fullmetal Alchemist, Zavok in Sonic the Hedgehog, Gemini in Mega Man Star Force, Laxus Dreyar in Fairy Tail, and Scorpion in Mortal Kombat.

In Renekton's youth, he knew he was a fighter from the beginning. He would often get into brawls and come home bloodied from fistfights, much to the chagrin of his older brother, Nasus. An extraordinarily gifted scholar, Nasus was soon selected for the Collegium of the Sun to later become a general, leaving Renekton alone in their home village. Without his brother's guidance, Renekton's skirmishes became even more out of hand, and when Nasus got word he requested that Renekton should enlist in the Shuriman army, where he could put his violent nature to good use.

Under the regimentation of the army, Renekton became more disciplined and grew to become one of the most capable and respected warriors in Shurima. Under the command of General Nasus, Renekton would lead the Shuriman campaigns to victory from the front-lines, and the two brothers became decorated war heroes famous across the land. It was said that whatever battle Nasus planned, Renekton would win it with with courage and might, and Renekton became known as the Gatekeeper of Shurima.

But as decades passed, not even a thousand victories could prevent tragedy when Nasus became very ill with an incurable disease. Renekton stood by the deathbed of his brother, distressed that the greatest general in all of Shurima was now reduced to a wasting husk of his former self. But as fate would have it, a miracle occurred when the Sun Priests of Shurima declared that Nasus, a one of the empire's greatest heroes, would be bestowed with a gift: an Ascension ritual which would grant him immortality and the power of the gods.

Praying that the priests had come in time, Renekton carried Nasus up the steps to the Ascension dais. Wishing to sacrifice himself so his brother my live, Renekton expected to be obliterated by the radiance of the sun during the Ascension. Yet in the energies of the Sun Disc, as Nasus became a cunning jackal-headed demigod, Renekton too became an Ascended: a powerful crocodile warrior who would be a guardian of the empire alongside his brother.

For hundreds of years, Renekton and Nasus were unstoppable. As a human, Renekton was already renowned for his ruthlessness, but as a mighty crocodile, his ferocity in battle was now unmatched. As the years rolled by, Nasus became increasingly worried by his brother's animalistic tendencies, but Renekton embraced it when his enemies named him the Butcher of the Sands.

The Fall of Shurima

Under Prince Azir, Renekton served as a mentor when teaching him how to fight. When Azir became emperor, Renekton continued to serve under the empire and remained a capable protector for decades. Thus, when word got out that an ancient being of fire had escaped from its prison in a magical sarcophagus, Renekton and Nasus were dispatched to investigate. Unfortunately, this was all part of the grand scheme of the sorcerer Xerath, Azir's right hand advisor, who hoped to hijack the Emperor's Ascension ritual in the brothers' absence.

As Xerath betrayed Azir, the brothers were far from the capital, but they felt the disturbance nonetheless. Rushing to Azir's aid, they were shocked to find they were too late, for Azir was dead and the great city and Sun Disc were in ruins. Xerath, in his new, Ascended form, was waiting for them, and a great battle ensued.

The brothers tried to imprison Xerath in the magical sarcophagus, but to no avail, for Xerath shattered it to pieces. Realizing the magus was too powerful for them to defeat, Renekton instead dragged Xerath into the underground Tomb of Emperors, telling Nasus to seal the door as they struggled in the depths. Knowing there was no other way, Nasus obeyed his brother, leaving Renekton and Xerath to continue their battle in the eternal darkness.

As millennia passed, Renekton's strength began to fade, and with a combination of manipulation and dark sorcery, Xerath twisted Renekton's mind to insanity. Renekton saw illusions of his brother sealing him away on purpose, and imagined that Nasus had betrayed him all those years ago. Over time, Xerath corrupted Renekton until he was nothing more than a shell of his former self, driven by rage. One that could prove a valuable ally to the magus' ends.

The Rise of Shurima

When the Tomb of Emperors was unearthed by Cassiopeia and Sivir, Renekton was the first to escape, emerging from the depths with fury and malice. Renekton made his way to the Shuriman desert, hunting his brother in hopes of claiming his revenge.

As Renekton begins his endless hunt, tales of the Butcher of the Sands echo throughout Shurima once again. The noble hero of Shurima is gone, replaced by a bloodthirsty monster. Since his release from the tomb, Renekton has acquired a following among the fiercest desert raiders, though he doesn't really care much for worshippers. Renekton's only target remains Nasus, and while he still has his heroic moments, the violent frenzy of his deranged state makes it difficult to think about anything but revenge. Renekton was never one to back down from a fight, and this time is no different. Nasus knows that one day, he will have to answer Renekton's challenges for battle...

In game, Renekton is a diver-type champion, a fighter that uses his mobility and durability to get damage enemies in combat. His passive, Reign of Anger, helps Renekton gain Fury every time he attacks, which helps power up his abilities. Renekton can use Cull the Meek to swing his blade around him and deal damage, Ruthless Predator to slash and stun enemies, and Slice and Dice to dash towards enemies with his blade. Renekton's ultimate, Dominus, transforms Renekton into his Tyrant form, which helps him gain health and Fury while dealing damage in the area around him.

Even when Renekton was still noble warrior, he has always had a violent side, liking to get into fights as a result of his hotheaded and unpredictable nature. When Renekton became an Ascended, he sometimes embraced his animalistic side while in battle, destroying entire cities in ways that shocked even those who saw him as a hero. While he was renowned for his cruelty and ruthlessness in battle, Renekton was still good at heart and cared deeply for his brother Nasus, even willing to sacrifice himself to save him, but these traits left Renekton vulnerable to Xerath's influence in the millennia they were locked away, and ultimately became Renekton's defining traits in his insanity. While Nasus believes his brother is truly gone, some remain hopeful that the old Shuriman hero can one day reclaim his old humanity to defeat his new, tyrannical master.

Renekton as he appears in Legends of Runeterra.

Renekton's second form, which is him as he appears in "With Teeth". 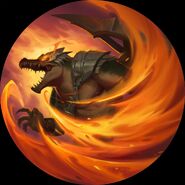 Renekton in "Shurima: Descent into the Tomb".

Shurima Descent into the Tomb Cinematic - League of Legends

New Expansion- Empires of the Ascended - Legends of Runeterra