Rentwhistle Swack is a recurring antagonist of the Buzz Lightyear of Star Command series. He was an unscrupulous con man who was previously arrested by Space Ranger Booster.

He was voiced by French Stewart.

Rentwhistle Swack was first seen in the episode "Beast of Karn", where he was poaching creatures on the planet Karn. Eventually, he accidentally bagged Booster in his hunt. He had some of the creatures that he poached brought to a space station where he met up with some hunters that started poaching Booster. While the hunters were hunting Booster, Rentwhistle Swack fled the area only to be intercepted by Team Lightyear and Dr. Ozma Furbanna. The hunters were defeated and they alongside Rentwhistle Swack were sentenced to community service on Karn by Booster.

Rentwhistler returned in the episode "The Main Event", where he became Norbert Q. Klerm's "agent/booker/tour guide". Rentwhistler became involved of Norbert's plot of making Buzz and Emperor Zurg fight each other by a system to lure each other. However, unlike Norbert, Rentwhistler didn't approve of it, knowing that both Buzz and Zurg might catch up to the plot, but Norbert just ignores him. Needless to say, Rentwhistler was proven to be right, as Buzz and Zurg finally caught up to Norbert's plan, leaving Norbert to betray Rentwhistler by leaving him for dead. As an angry Buzz confronts Norbert for setting him and Zurg up, an angry Zurg destroys Norbert's system and sets Nobrert's ship to crash before escaping, forcing Buzz to rescue save both Norbert and Rentwhistler from the collision. Thanking Buzz for saving his life, Rentwhistler angrily beats up Norbert for betraying him.

He returned in the episode "Download", where he receives Zurg's message of capturing XR to gain intelligence of Star Command. Wanting to get into Zurg's good grace, Rentwhistler attempts to kidnap XR, but ends up being taken into custody by Team Lighyear. 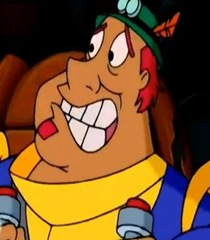 Retrieved from "https://villains.fandom.com/wiki/Rentwhistle_Swack?oldid=3780968"
Community content is available under CC-BY-SA unless otherwise noted.