Leader of the Black Organization

Finding the treasure inside the Sunset Manor.

Renya Karasuma (in Japanese: 烏丸連耶) is the boss of the Black Organization, and the main antagonist of Detective Conan series.

Also known as That Person, Karasuma is an influential aristocrat who lives in a golden castle, known as the Sunset Manor, who was presumed to have died fifty years ago.

From what is shown, Karasuma is an elderly, obese man with a nose that is shaped like a beak, gives his face a resemblance to that of a crow. He dressed in black with a white scarf, held a walking stick with a orb on the top handle on his right hand with long nails, and on his left shoulder there is a crow, which could be his pet or merely a symbol.

Though not much is known about his personality, Karasuma is a creepy, cruel man, even before his revelation as the Boss of the Black Organization. He is obsessed with the treasure, and committed serial killings only to get closer to it and take it all for himself.

Once his true identity as the Boss is revealed, it is clear that Karasuma is a ruthless, cold person. He ordered the members of the Organization to brutally kill people and even each other just to prove their loyalty. He also has a favor to Vermouth, though the reason of this favor is unknown. However, even then, he still willingly sends her into deadly missions.

Renya Karasuma was the most wealthy and influential millionaire in Japan, who knows many famous and powerful people. During his lifetime, he had collected over three hundred pieces of priceless art. When his mother had died, he inherited Sunset Manor. After finding knowledge about the King, Queen and Knight leading to a treasure left by his mother which supposedly in the castle, Karasuma was unable to solve it himself, thus he hired people to solve the riddle and killing them as motivation for the others to work faster. Eventually Karasuma is said to have died elderly between forty and twenty years prior to the current timeline, during the Showa period, under mysterious circumstances. After his supposed death, the Karasuma family had declined, and the castle belongs to other hands, and hardly anything has been touched ever since the incident.

In truth, Karasuma is still alive and secretly plans crimes with an organization which he leads that Conan calls "The Black Organization", and communicates with his subordinates through text messages. His phone number, encoded as the famous children song Nanatsu no Ko, is #969#6261. He also promotes agents and deciding on their alcoholic code names. The FBI think that only a few among the highest ranking executive agents (such as Gin or Vermouth) were able to lead them to the mysterious boss.

Ten years after Karasuma's fake death, there was an auction fair held in the Sunset Manor, in memory of this late man, by selling out more than three hundred pieces of artifacts in his collections. In the second day of the auction fair, it was a dark and stormy night full of rain, when two soaked men visited the manor, bribing the auction fair's hosts with drugged cigarettes in order to proceed into the building. Then, they started to persuade all the guests to smoke their drugged cigarettes.

The guests all turned into a state of estacy after they smoked those cigarettes, but soon their mental state worsen, before the everyone were plundged into a state of madness. For example, one man hugged one of the artifacts and ran out of the room, screaming that he saw a devil. A woman knelt on the ground and begging for forgiveness hysterically. Another man started to prick himself with his pen. Soon, all the guests began to fight to gain the artifacts in the room, even declaring fights with blades and swords. After one night of hellish madness, the entire room was plundged into mess, leaving only 8 dead bodies and about a dozen of guests who were put into comatose.

This case soon became the only major case in Detective Conan series that, so far, has no explanation. However, it is presumed that Karasuma is the one behind this brutality, after his true identity and the truth that his death was faked is revealed.

Karasuma is first mentioned in Chapter 300, where many famous detectives of Japan were invited to his castle to find the treasure. It is revealed that the treasure is the entire castle itself, which is actually made of gold.

In Chapter 1008, Kudo Yusaku decodes the code which Conan (Shinichi Kudo, his son) read as ACASA RUM, and reveals that it is actually read as CARASUMA, revealing Karasuma is the Boss behind the Black Organization.

Karasuma would presumably show up in the final battle, where the series would reach its conclusion. 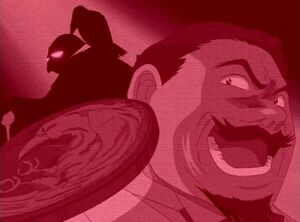 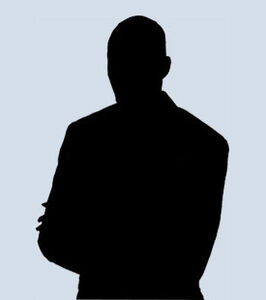 A silhouette used to depict the Boss of the Black Organization. 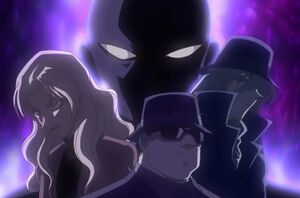 The anime version of Boss' silhouette behind Gin, Vodka and Velmouth.
Add a photo to this gallery

Retrieved from "https://villains.fandom.com/wiki/Renya_Karasuma?oldid=4348052"
Community content is available under CC-BY-SA unless otherwise noted.