All the powers of Riku and Zexion

Protect Naminé (succeeded via giving her a replica body in Kingdom Hearts III).
Help Sora take out Marluxia.
Take Zexion's power by killing him (all succeeded).
Destroy the real Riku so he can be a real person (Dark Riku; failed).

He is voiced by David Gallagher in English and Mamoru Miyano in Japanese.

The Riku Replica was an experimental Replica made by Vexen after he studied and took interest in the original Riku. With the help of Naminé, Vexen was able to give the Replica memories to help motivate him to help them. But the Replica was ultimately defeated by Sora, and his heart was destroyed by Naminé in an attempt to calm his anger. After miraculously reviving, he expressed that despite having no memories of his own he will protect Naminé. He is growing exponentially in strength, however he still feels empty inside.

Wanting to become someone unique, Axel convinces him the only way to do this is to gain power Riku does not have. To do so, the Replica hunted down Zexion, who had just lost a fight with the real Riku, so that he could absorb his power and challenges the real Riku to one last fight in which the Replica would not hold back. After being defeated by Riku, the Replica's body was destroyed while his heart vanished into darkness, finally at peace with himself.

In Kingdom Hearts 3D: Dream Drop Distance, the Riku Replica's heart is collected from the past by Young Xehanort and joins the True Organization XIII as "Dark Riku". Prior to becoming a vessel for Master Xehanort's heart, Dark Riku enters the Sleeping World of Prankster's Paradise to unnerve the real Riku by recreating his kidnapping of Pinocchio. Though Riku manages to catch him, Dark Riku simply disappears into darkness, causing Riku to recall the Replica. Later, Dark Riku joins his fellow Organization members as Master Xehanort prepares to make Sora his thirteenth vessel, but is forced to retreat back to his time due to interference from Lea, Donald, and Goofy.

In Kingdom Hearts III, Dark Riku visits San Fransokyo to conduct an experiment to recreate a heart from data. Posing as the real Riku's past self, he uses the Darkubes and the original Baymax's combat chip to forge a heart using the despair and terror of the citizens alongside the optimism of Big Hero 6 and Sora's team. After gathering enough data, Dark Riku corrupts the original Baymax into Dark Baymax, but Dark Baymax is defeated and purified by Sora.

Dark Riku joins the Organization at the Keyblade Graveyard, joining Xigbar in a final clash against Sora and Riku. Upon Dark Riku's defeat, the Riku Replica expels his past self's heart from the vessel, leaving it for Naminé to take before fading away. 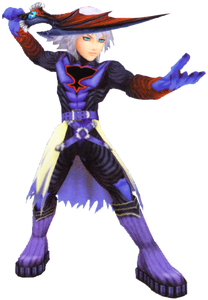 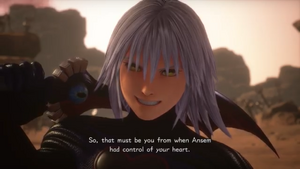 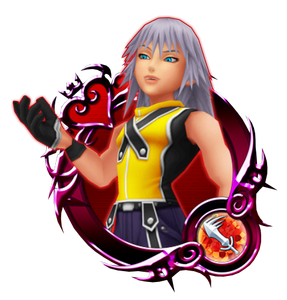 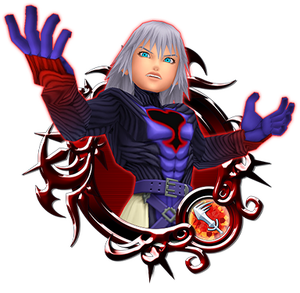 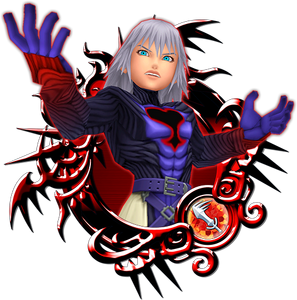 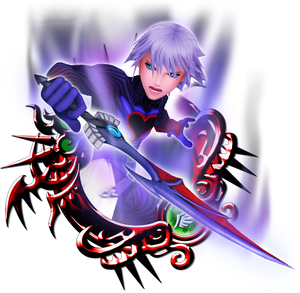 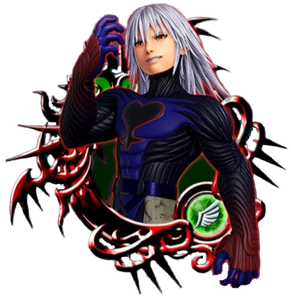 Retrieved from "https://villains.fandom.com/wiki/Repliku?oldid=3936132"
Community content is available under CC-BY-SA unless otherwise noted.