Reptilicus is the titular antagonist in the 1961 Danish-American giant monster film of the same name. It is a giant dragon-like creature with the ability to regenerate from a single body-part.

Its vocal effects were provided by the late Georg Jensen.

Svend Viltorft and other miners dug up Reptilicus's tail when they were drilling in Lapland. It is flown to the Danish aquarium in Copenhagen, where it is put in a cold room for study. Due to careless mishandling, the door is left open and the section begins to thaw, only for scientists to find that it is beginning to regenerate.

The creature is dubbed "Reptilicus" and its regenerating ability is compared to other animals like earthworms and starfish. Once fully regenerated, it goes on a rampage across the Danish countryside to the panic-stricken streets of Copenhagen.

It is presumably killed when it is poisoned by ingenious scientists and military officers, and its blown-off foot sinks to the bottom of the sea, leaving the film open-ended, as the foot could possibly regenerate. 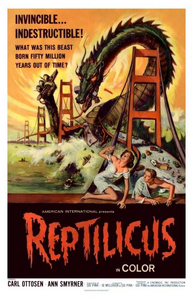 Reptilicus as seen in the American film poster.
Add a photo to this gallery

Retrieved from "https://villains.fandom.com/wiki/Reptilicus?oldid=3175562"
Community content is available under CC-BY-SA unless otherwise noted.