Master (by the Crystal Miners)

Leader of the Crystal Miners (formerly)

Gain as many elemental powers as possible
Escape from the crystal prison (both succeeded).

Reclaim his elemental powers from BoBoiBoy (succeeded on Thunderstorm, Thorn, Cyclone and Solar, but failed on the rest).
Defeat BoBoiBoy and company and become a master of the Elements (failed).

He was voiced by Fadzli Mohd Rawi.

He is an alien that has blue skin. His hair is dark blue with light blue crest. He wears a maroon and black outfit with blue lines along with his black pair of sandals. The bottom of his outfit can be seen torn, which implied that he once fought with Hang Kasa. Retak'ka is very old since he spoke with an old Malay accent (in the Malay version) and was imprisoned in crystal for more than 100 years.

Retak'ka is a dangerous ancient villain who was the original user of BoBoiBoy’s Elemental Powers. He has come to take back his powers from BoBoiBoy with whatever means necessary so that he could remain the supreme master of the seven Elements. Retak'ka is intelligent, power-hungry and ruthless. He has no compassion for his opponents during the battle, especially BoBoiBoy, his toughest enemy. He is willing to destroy an entire planet just to become stronger by draining elemental powers from said planet, as evidenced several times in the movie. He also destroyed TAPOPS station and intimidates Koko Ci to tell him Boboiboy's location.

He knows more about elemental powers than BoBoiBoy does, informing him that splitting make Elemental Powers weak, indicating his experience with having the powers that BoBoiBoy currently inherits.

Retak'ka was originally born on Ata Ta Tiga according to the 100th issue of the official comic magazine. However, he was thrown away by his parents to Planet Gugura, a large garbage dump at a very young age. He also met Hang Kasa and both of them quickly became the best of friends. At some point in their life, Retak'ka along with Hang Kasa discovered Power Spheres CrystalBot and GammaBot. Retak'ka took the latter and Hang Kasa took the former. With that, they both become unbeatable in battles.

However, it was not enough for Retak'ka as stated by Hang Kasa. He became power-hungry, ruthless and cruel, to the point that he became willing to fight his one and only friend Hang Kasa himself to obtain his crystal power. Before that point, he fought and killed a few more Power Sphere wielders for their powers, including the likes of King Balakung of the Leaf Element, Mas Mawais of the Ice Element, Panglima Pyrapi of the Fire Element, Satriantar of the Lightning Element and Kuputeri of the Wind Element, with Kuputeri surviving the attack while enveloping herself within a cocoon, remaining in a dormant state as the tyrannical Emperor Reramos eventually usurped her throne for the coming years. This would lead to a long war between Fire and Ice Tribes living on Planet Baraju as the people blame each others' rulers for killing each others' kings. Hang Kasa managed to absorb all of Retak'ka's elemental powers into Ochobot along with his Crystal element before sealing Retak'ka into a Crystal Prison. He remains there for about 100 years until a gang of Crystal Miners arrive to dig crystals in the Solaria system. However, they unknowingly released Retak'ka from his frozen state and he interrogated Kechik, leading to the events of BoBoiBoy Movie 2.

After being freed from his crystal prison on the Miners' spaceship, he finds out that he has a remnant of his Gamma powers. The Miners were surprised to see that he was a master of the Elements, although they acknowledge BoBoiBoy as one. As a result, Retak'ka interrogates the leader of Crystal Miners for information about BoBoiBoy and TAPOPS, assuring that he will not harm them and they will find more crystals.

Later on, he attacked TAPOPS station, destroying it in the process, in an attempt to force Koko Ci and Admiral Tarung into revealing BoBoiBoy's location. When BoBoiBoy did show up, he threw Koko Ci to the ground and lifted BoBoiBoy with his hand, demanding him to return his elemental powers to him. BoBoiBoy refused but it didn't end well after Retak'ka absorbed BoBoiBoy Thunderstorm, BoBoiBoy Thorn, BoBoiBoy Cyclone and BoBoiBoy Solar, stripping BoBoiBoy from five of these powers. Gopal suddenly shows up to save BoBoiBoy before Koko Ci tells him to find Hang Kasa as the gang urgently depart to Planet Quabaq. With the Commander, Admiral, Fang, Yaya and Ying left behind on the station, Gogobi detonates the explosives left behind to destroy the already-wrecked station, not before Captain Kaizo uses his Energy Barrier to protect everyone, saving his brother, Yaya, Ying as well as Koko Ci and Tarung and placed a tracker on the Miners' ship.

Throughout the movie, he went from planet to planet, draining the elemental forces within those planets to upgrade his elements. When he did so, said planets will suffer from mass destruction, potentially wiping out all life on it as shown in the movie when Retak'ka killed almost all the residents of Planet Gur'lathan. After finding out that all the Gur'lathan guards were defeated, Koko Ci said that Retak'ka's conquest is direr than expected. Yaya and Ying then trace Retak'ka and his crew to Planet Bayugan, where he would drain the planet's Wind element. Ying sends a warning signal to the inhabitants to inform them about the threat.

On Planet Rimbara, Retak'ka prepares to drain the Leaf element from there. After Yaya, Ying, Fang, Sai and Shielda help evacuate the native mushroom people, known as the Cendawa Tribe, Retak'ka traps the ship with his Darkwood form in vines, while the trio scramble to protect the ship. Retak'ka kidnaps them to get information about Earth, where he could upgrade all his stolen Elements.

Retak'ka informs his old enemy, Hang Kasa, and BoBoiBoy to meet him at Earth, threatening him that he will kill Fang, Yaya and Ying if he didn't come. Kasa also realizes that the Crystal Prison had kept him younger than he normally should be. Hang Kasa teleports to Earth to look for Retak'ka, whom he mentions to Retak'ka that he has a stomach ache in an attempt to let his guard down. Retak'ka sees this, attacking his enemy. Hang Kasa activates CrystalBot, then uses Crystal Shield to block Retak'ka's Thunder Blade while Pipi turns into Hardshell Tortoise before EggaBot could be fully recharged to free Gopal and BoBoiBoy.

Retak'ka then overpowers Tok Kasa as an appreciation for crystallizing him, before breaking Kasa's Crystal Armor in his Tempest form. Retak'ka announces his intention to kill Hang Kasa, but BoBoiBoy blocks the attack as Blaze. BoBoiBoy then transforms into Ice to distract him with Ice Bow. Retak'ka retaliates by pinning him onto a rock and strapping him with vines as Darkwood. Ochobot then feels that BoBoiBoy is in danger, but Gopal say that they can't let Retak'ka see them there. Meanwhile, the Zolas deal with the Miners and save Fang, Yaya and Ying, who were hostages on the miners' ship. Retak'ka grabs the seemingly dead Tok Kasa and absorbs his Crystal powers before facing BoBoiBoy.

Instead of surrendering, BoBoiBoy split into two, namely BoBoiBoy Ice and BoBoiBoy Blaze. Retak'ka asks if he still insists on splitting, only for BoBoiBoy to reveal that he is actually merging. The newly-formed BoBoiBoy Frostfire then engaged him. Retak'ka almost wins when he nearly crystallizes BoBoiBoy when Gopal provides Ochobot to BoBoiBoy, who used the former's elemental drain to drain his Crystal power. Enraged at this, he switched to Retak'ka Voltra to engage Fang, Yaya and Ying, who all managed to beat him down afterwards. Refusing to accept his fate, he calls them a "puny brat" and uses his Darkwood form in an attempt to destroy a nearby dam, but was stopped by BoBoiBoy Glacier who froze him using Ice Golem before using Ochobot to strip him of all his remaining powers. BoBoiBoy Thunderstorm and BoBoiBoy Solar then fused to form Boboiboy Supra, who later blasted Retak'ka into outer space. BoBoiBoy collapsed in exhaustion, causing him to fall into the river in an unconscious state.

With BoBoiBoy later retrieved from the river and treated alongside Adu Du in the space hospital, he sees the Cendawa Tribe, who would repair the damages from BoBoiBoy and Retak'ka's clash on Earth. Hang Kasa apologizes to BoBoiBoy for their argument on Planet Quabaq, while passing down the responsibility of handling the seven Elements to him. 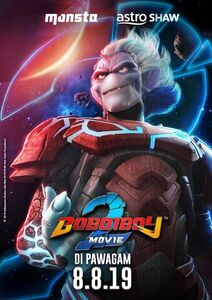 Retak'ka in the promotional page 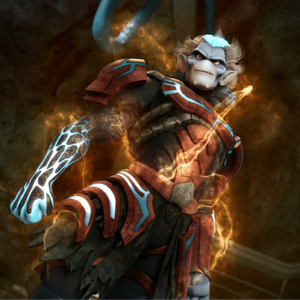