4 Centuries ago during Sengoku (Age of Wars) Era

Conquer the world of both dimensions (human world and hell) through the power of darkness.

The Dark Warlord and its army from underworld are main villains of the videogame Sengoku.

400 years ago, although a mere human, there was a warlord who revelled in bloodlust of unprecedented proportion: it was as if he was a demon in a flesh. He unleashed his army of darkness upon Japan in an attempt to conquer it, leaving a widespread carnage and destruction. But he was slain by 2 legendary samurais after fierce fights. Before perishing, the Warlord left a prophecy, that he would be reborn in four hundred years together with the Ashura, a dark demonic deity. And when that happens they would rule the world. In the present day, the prophecy is fulfilled. The Warlord rises again along with his castle, summoning the evil spirits from the underworld to conquer the world of living, expecting Ashura to be born so that nobody would stop him.

Two mighty warriors from the present day (direct descendants of the two Samurais who slew the wicked warlord 4 centuries prior) are chosen to fight the evil Warlord and his demonic legions to stop his genocidal global conquest. Helped by ancient spirits and going back and forth between human realm, past era and netherworld, they fought the minions of the Warlord and liberated occupied territories along the way. The Dark Warlord, realizing the threat the two descendants were, dispatched his demon minions to kill the two, with no success.

Just as The Dark Warlord is killed, the dark god Ashura was born from the body of the Warlord, using him as its vassal: it was the resurrection of Ashura. True to its being Ashura displayed godly powers and dark magics / sorceries which is to be one of the toughest battles in arcade video gaming history. After fierce and tough battle, Ashura is also vanquished and the human world is finally freed from the madness of the dark warlord and his demonic army.

Although being vanquished, it is indicated that should humanity corrupt and once again repeat the mistake of the past, Ashura can be revived one day. 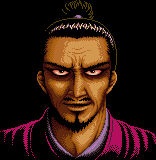 Retrieved from "https://villains.fandom.com/wiki/Revenant_Army_of_Dark_Warlord?oldid=3467816"
Community content is available under CC-BY-SA unless otherwise noted.