He was portrayed by Toru Nomaguchi, who also portrayed the real Koya Nishihori.

Roidmude 005, just like his other fellow Roidmudes, is responsible for the Global Freeze of April 2014, while a terrorist organization named "Neo-Shade" was operating attacks across Japan. Shortly before the Global Freeze, Roidmude 005 found the "Neo-Shade" threat in the computer. Wishing to oversee the whole event further, he flew around the warehouse he stationed in and came across Koya Nishihori, a criminal known as the Copycat Pirate who pretended to be the Neo-Shade.

However, before 005 could arrive the house of Nishihori, police officers Shinnosuke Tomari and Akira Hayase arrived the location where the video was filmed as they manage to save the hostage and having his identity revealed. Nishihori would told them that he wants revenge from humiliation. Before Shinnosuke could arrest him, they were attacked by Roidmude 005, giving Nishihori a chance to escape.

However, the Heavy Acceleration started to happen as Nishihory was taken by 005. Interested with Nishihory's twisted and vengeful personality, 005 copied the man's data and throw him from a great height. It wasn't until he landed in Kamen Rider Protodrive's arms and lose consciousness. Protodrive dueled 005 and won with a Full Throttle attack. With his Core flying away, Protodrive took his Viral Core and read his memories, and Nishihori was subsquently sent into prison.

While Nishihori was in prison, 005 assumed his form and operation as the "Copycat Pirate" but was destroyed by Shinnosuke Tomari as Kamen Rider Drive.

Six months later, Roidmude 005's core survived and was contained in Brain's computer for safekeeping, under orders from Heart. Later, 005 was released and sought to carry out his vengeance against Shinnosuke and Kamen Rider Protodrive. To initiate his plan, 005 kidnapped a high-class company's CEO's daughter along with a priceless painting. Under the pretence as the Phantom Thief Ultimate Lupin, 005 forces the young woman to film a ransom demand video in order to lure Shinnosuke.

Shinnosuke arrives at the scene, and 005 reveals that this was all an act just to bring Shinnosuke here. His vengeance worked well, and he provokes Shinnosuke/Drive by using Hayase's injury against him. 005 reveals his true intentions: to make Shinnosuke suffer by injuring another of his partners, Justice Hunter. They began to battle against each other, and it wasn't until Massive Monster released Justice Hunter and Drive used them to destroy 005.

However, unlike the police originally believed, the core of 005 survived his defeat by Drive, and resided within the worldwide web to gather information for his vengeance. In this sequel novel of Kamen Rider Drive, 005 resurfaced two years after the destruction of Tenjuro Banno and Sigma Circular, and gained an Advanced Roidmude form known as Revenger Roidmude.

After a visit to Reiko in the prison and later hospital, Reiko gave him a hint to the true culprit by recounting the recent events, starting from the death of Go's friends, the death and revival of Shinnosuke, the reawakening of Banno and eventually, the death of Chase. Under Reiko's help, Go discovered that 005/Revenger is the true culprit of this orison outbreak. After finiding Revenger, Go transforms into Chaser Mach - a form he used to destroy Banno's Kamen Rider Gold Drive form - to fight against Revenger, but because Revenger had power much greater than Gold Drive, and also because the prototype Driver Go is using can only handle a transformation for a maximum of 5 minutes, Go began to fall behind in terms of strength.

At the end of the 5th minute, Go landed a punch on Revenger before the transformation is cancelled. Go later uses Shift Viral Core to transform into Super Dead Heat Mach, which is described as a white version of Super Mashin Chaser with Mach's head and Chaser's eyes. Using this form, Mach defeated Revenger with a Rider Kick, destroying his core once and for all. The plot of Revenger was eventually put to an end, and the escaped criminals were either captured or got themselves killed.

As for the original Nishihori, he attempt to digitize himself to fuse with entire World Wide Web use the Anima System which Masahiko Odagiri invented, but died in a freak accident where the system had a short circuit, destroying both the system along with Nishihori's consciousness, leaving only his corpse and Go was too late to save him.

In Kamen Rider Heart, 005 appears as a minor antagonist, among the datas of destroyed Roidmudes which fused into Roidmude 5886. 5886's goal is to complete himself by stealing and killing the identities of those whom the Roidmudes copied in the past. He formerly overpowered an accidentally revived Heart when he was trying to transform into a Kamen Rider, but later he was successfully destroyed by Heart who managed to transform into Kamen Rider Heart. Due to the overlord of his core, Heart later perished once more along with the cores of Brain and Medic, but like his previous demise, Heart accepted his fate peacefully.

Nevertheless, by the end of the segment, it was revealed that not every cores that combined into 5886 were destroyed by Heart. 005 was its only survivor, now having his core reformed. After Heart passed away, 005's survived core escaped from the destroyed 5886, leaving a vengeful vow before he escaped into World Wide Web once more.

After the incident of Kamen Rider Heart, the court amend Reiko's sentence to five years on probation due to Go's testimony. Reiko was released from prison and recruited by Go, as they had feelings towards each other. However, a misunderstanding between each other strained their relationship, as Reiko decided to find a quiet place for she and Go to meet for her confession, while Go gave her a circus show instead as he was unwitting to the fact.

Meanwhile, 005 hid himself among the crowd by assuming the form of Koya, committing murder by manipulating maidens into stragling their own fathers with their hair. Reiko was assumed to be the murderer as she happened to be at the scene, but Go believed she was innoncent and helped her to escape. Reiko explains that last night, she appeared at the Marina after receiving the text message from "Go", but she instead found the victim, and a laptop that show her late father's face.

It was 005 who disguised as "Koya", who said that he's back to take revenge on her for betraying him by yearning for light instead of darkness. He then say that the man he murdered is killed with a certain criteria, and the murderer is none other than victim's daughter who used her own hairs to strangle her dad, which the latter complies and laughed madly. 005 taunts Reiko to try finding the next victim, while claiming that her fate and happiness are only in the darkness. Following the advice of her "father", Reiko decided to commit suicide, much to Go's horror. He tried to stop her, but lost his conciousness after being put down by her knock-out gas.

The next day, Go was awakened by duty officer Koichi Kano, the human whose idenity was copied by Chase, making Go almost mistaking him as Chase. Kano gave Go's leads Go outside to give him the Ride Macher, Zenrin Shooter and Mach Driver Honoh from Rinna and demands for Reiko's location. However, Go punches him and apologizes, claiming that the police presence will scare her away. Go leaves while Kano is yet to give Go Shift Ride Crosser. However, the Shift Signal somehow possesses Kano and gives him Chase's personality.

Meanwhile, at an abandoned warehouse, 005 kidnapped a girl named Shizuka, brainwashed her and lured her father to look for her. Under 005's brainwashing, Shizuka appeared and lashed out at her father upon being found. She claimed that her dad lied to her and wished for him to die. 005, already materialized as Koya, strangled Shizuka's dad with hair strands, while Shizuka laughed madly. However, due of her father plead, Shizuka awakened from her trance and pleads Koya to stop. Koya replied in disgust as he threw Shizuka away. Before Koya could kill Shizuka's father, Go arrives and shoots him in the head with the Zenrin Shooter, revealing that Koya is Roidmude 005 in disguise. As Go ordered Shizuka and her father to flee away, 005 strangles him instead.

Go asked where Reiko is and 005 showed that she was tied up, with her mouth half gagged by the same hair strands. 005 then decide to kill Go by hanging the hair strands that choke him to ceiling, so he can die via suffocation. Reiko became panic stricken, and pleaded with 005 to not kill Go. 005 taunted hers, saying that a child of monster should have ended like a monster too.

However, Go objected loudly, stating that he is also a child of monster, but still able to live happily. He proclaimed that Reiko was his own reflection and should never fall for 005's lies. Knowing Go was referring to Tenjuro Banno, a human being even worse than her father, Reiko let out a gasp for Go's proclamation and had a change of heart. Fed up with Go, nonetheless, 005 shank his left foot and seemingly broke Go's neck, apparently killing him.

Reiko screamed in horror at Go's apparent death. 005 said that anyone that she loved will die anyway because of her. 005 then gives Reiko a Bat Viral Core and told her to unleash her inner darkness, so that she can reunited with her family once more and regain her happiness. As Reiko is in daze about what to do, she walked below Go, then surprisingly destroy the Viral Core while crying, claiming that she just wanedt to be happy. Reiko then uses the Zenrin Shooter to shoot the hair strands that bind Go. As 005 was about to kill Reiko, Go, who was revealed to be alive, shoots 005 down. Go comforted Reiko, claiming that he won't die for her, and transformed into Kamen Rider Mach while stating that he's immortal.

Go and 005 engage in a fierce battle for the second time, which the former seemingly wins with a Zenrin Shooter Full Throttle. However, 005 evolved into his Revenger Roidmude form and knocked Go out of his transformation with his sheer power. Go refused to give up, as he was reminded the second chance Chase gave him 3 years ago. As a response to Go's will, Kano appeared while riding a truck. However, instead of Kano, it is an image of Chase who shows up in the flames. Chase gives Go the Shift Ride Crosser and asks him to fight to protect his new family. Go then used the Shift Rider Crosser to transform into Mach Chaser. Using his newly gained power, Go managed to overpower Revenger and finished him off, destroying 005's core for the second and probably final time.

After the destruction of 005, Go managed to save Reiko and proved her innocence. Nevertheless, as Reiko is about to thank him, Kano regained his consciousness and arrested Go because of his earlier assault on him, stating that rules were rules before dragging a desperate Go away, with Reiko following him.

Soon afterwards, Go was instantly released and became a couple with Reiko, who was inspired by Go and decided to let her dark past away for good, making the influence of both her father and 005 gone forever. Eventually, every vengeful attempts 005 threw upon Kamen Riders died out in vain. 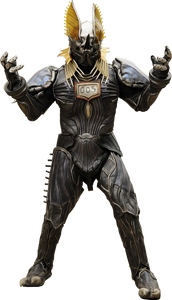 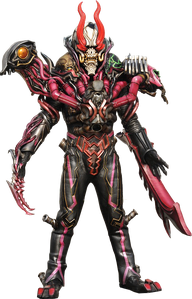 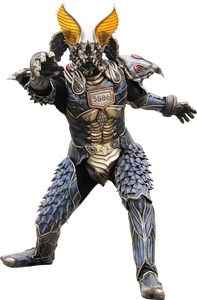 Roidmude 5886
Add a photo to this gallery 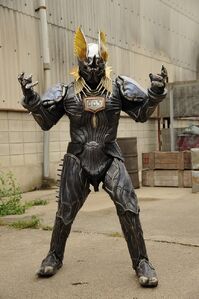 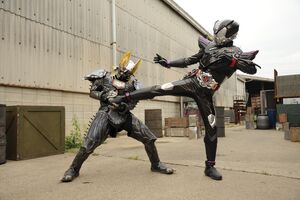 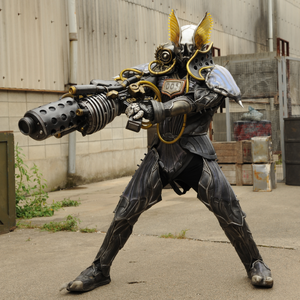 Roidmude 005 with his arm cannon equipped. 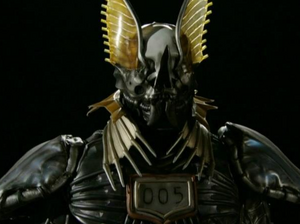 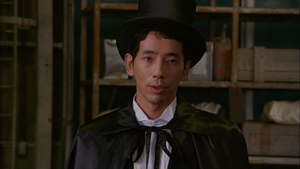 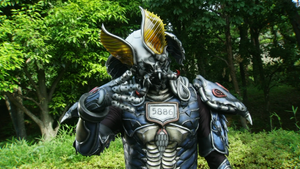 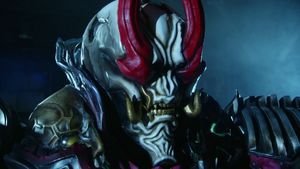 Retrieved from "https://villains.fandom.com/wiki/Revenger_Roidmude?oldid=4182851"
Community content is available under CC-BY-SA unless otherwise noted.