Leader of the Hushed

Getting people to join his cult.

Get as many people to join his cult as possible.

The Reverend is the main antagonist of the 2015 book The Silence by Tim Lebbon and its 2019 film adaptation of the same name. He is a reverend that, after the fall of society due to the cataclysmic Vesps, forms a cult called the Hushed and begins efforts to survive in the new world, regardless of how evil his actions are.

In the film, he was portrayed by Billy MacLellan.

The Reverend was presumably a member of the church before the vesps were released and began killing all of the people in the world. After learning that the vesps are attracted by noise, he cut out his own tongue and began a new lifestyle of silence to survive. He convinced others to do the same, and soon began a tongueless cult called the Hushed.

One day, he encountered Hugh Andrews and his sixteen-year-old deaf daughter Ally. After watching them fight off vesps and escape by triggering a fire alarm, he confronts them and, through the use of writing in a notebook, asks if they would join his cult. They decline and go about their way, much to the Reverend's anger.

Later that day, they find that the Reverend has rallied the members of his cult and followed them back to the house they are staying in, again requesting they join. Hugh politely refuses, but the Reverend then reveals his real interest is in Ally, telling Hugh that she is "fertile" and would be able to begin the repopulation efforts. Hugh gets a shotgun and forces the cultists to leave.

That night, the family find a little girl on the property and bring her in. However, she is actually a part of the cult, and is wearing a suicide vest laced with cell phones that begin ringing. At the same time, the reverend and the cult have taped cell phones to the windows of the house, which attract the vesps. In the confusion, several cultists abduct Ally, though she is saved when her grandmother sacrifices herself by screaming and attacking the captors, causing the vesps to kill them all as Ally escapes. The Reverend then captures Ally at knifepoint, and Hugh attacks him. Hugh beats the Reverend down with the butt of his gun and subdues him, but the Reverend stabs him with his knife. Hugh finishes the Reverend off by smashing his face in with the butt of the gun, killing him and allowing the family to escape to a refuge up north.

The Reverend comes off as affable and friendly, if not a bit eccentric, at first, but is later revealed to be a sadistic madman. While he believes that his efforts to create a new society that can survive in a vesp-infested world are understandable and correct, his willingness to kill entire families, force others into joining him under the threat of death, and attempt to kidnap and rape a teenage girl for the sake of repopulation leave others seeing him as a remorseless psychopath and serious threat to anyone who dare oppose him. 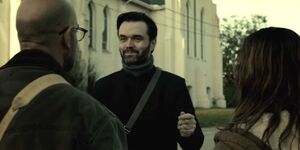 The Reverend requesting the Andrews join his cult. 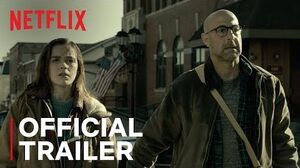