Lying and keeping the women in the bunker.

Keep the women in the bunker as long as possible (succeeded for a while).

Sway the judge and jurors to avoid being sent to prison (failed).

Reverend Richard Wayne-Gary Wayne, known to most as simply Reverend Wayne and as Methuzalophsteron, is the main antagonist of the Netflix series Unbreakable Kimmy Schmidt. He is the CFO of Savior Rick's Spooky Church of the Scary Apocalypse and is responsible for starting a doomsday cult where he kidnapped several women and made them believe they were survivors.

He was played by Jon Hamm, who also played Buddy in Baby Driver and Herb Overkill in Minions.

In the late 1990s, Reverend Wayne lured four women, including Kimmy Schmidt, to an underground bunker in Indiana, and convinced them they were the sole survivors of the apocalypse. He raped and abused them for years and would never let them see the outside world.

Although Richard appears to be of some Christian faith, his perception, and knowledge of the Bible are very distorted. According to him, God was really named "Gosh", and Jesus had a crazy brother, named Terry. He has many other odd stories from his "Bible" and it is assumed that he made most of them up and tried to convince the women he captured that they were true.

The Reverend makes his first appearance in "Kimmy Rides a Bike!" where he is held in trial. He represents himself as his own lawyer and pretends to be innocent, quoting scripture and singing to the court to try to sway everyone, but fails.

Kimmy gets a call from The Reverend from jail, letting her know that he wants a divorce. This surprises Kimmy since she did not realize they got married. 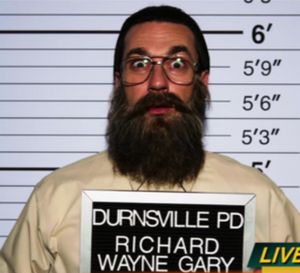 The Reverend's mugshot.
Add a photo to this gallery
Retrieved from "https://villains.fandom.com/wiki/Reverend_Richard_Wayne?oldid=4018252"
Community content is available under CC-BY-SA unless otherwise noted.