Villains Wiki
Register
Don't have an account?
Sign In
Advertisement
in: Mature, Manga Villains, In Love,
and 49 more

Hanging out with Denji.

Kill Denji and take his heart to the Gun Devil (abandoned).

Run away with Denji out of Japan and go to school with him (failed).

She is a half-human, half-devil hybrid that initially appears as a girl with otherworldly beauty that seemingly loved Denji and forms a rather intimate relationship with him, Reze is revealed to be an assassin from Russia that was seemingly sent by the Gun Devil in order to obtain Denji's heart and to that end, she was accompanied by another devil, Typhoon Devil in order to accomplish her mission.

Reze is a young woman who appears to be in her mid to late teens. She has slanted green eyes, long black hair that is partially tied into a bun, and wears a choker that seems to have a pin on the side of it. In her first appearance, she wears a white shirt with long black sleeves and long black pants. When she works in the cafe, she wears an apron.

In her next appearances, Reze wears a white sleeveless shirt with a black ribbon surrounding her neck and black shorts with her true nature as a bomb demon being a half-naked lady that wears a bunch of dynamites that resemble an apron, mirroring her work as a cafe waitress, and has a bomb that resembles a "Fat Boy" bomb as her head. When escaping, she wears a regular white t-shirt and a white hat.

At first, she seems to be a kind and gentle girl who has a crush on Denji as it shows that she attempts to give Denji some sort of normal and functioning life such as bringing him to the school or teaching him how to swim, which resulted on Denji becoming increasingly infatuated with her charm and demeanor. This was done due to Reze having a concern towards Denji's well-being due to the horrific lie that he had in the past and despite his life seemingly getting better thanks to Makima, she still suspects that Denji himself still has a poor life due to him being either treated as a pawn more than anything else that doesn't have any normal life such as going to school. Her behavior of caring towards Denji was also justified as well since she seemingly doesn't have a normal life thanks to being experimented on by the Russian Government to become a super soldier.

However, as she reveals herself to work for the Gun Devil, her true personality is manipulative and brutal, as she is shown killing many Devil Hunters without care or mercy. She does, however, not enjoy killing and prefers to avoid it, unless necessary for her mission. At the same time, while she does confess towards Denji that her relationship with him was fabricated, deep down inside, she still likes Denji and is very surprised on why he ended up saving her despite she tried to kill him in the first place and fabricating their relationship. This was shown as she attempts to make amends with Denji by coming to the cafe as they promised until she met her unfortunate end thanks to Makima and the Angel Devil.

According to the strongest devil hunter, Kishibe, Reze was one of the children who were locked by the USSR Military in the Secret Ammunition Room and was horrifically experimented by them in order to become a Super Soldier which resulted on her becoming a bomb devil. Initially believed to be a myth, it was revealed that the Secret Room itself was real after the investigations by the American journalist which become a huge issue. Years later after being released, Reze then made allegiance towards the gun devil in order to take Denji's heart.

Reze first meets Denji at a telephone booth in the rain, which it seems to be by fate or a coincidence. She take an interest in him when he makes a flower come out of his mouth and gives it to her.

The next day, Denji met up with Reze at the restaurant she was working at continued to get to know each other better. They studied together, She was helping Denji on how to read since his lack of education growing up, even mentioned what a unfortunate, hard life he must've endured for a kid of his age. So she came up with an idea to go to school with him at night time.

While they were bonding at a school they swam naked together, having a great time. After they were finished, Reze walked out to go to the bathroom and then encountered a strange man with a knife. She screamed and ran away from him while the bizarre man said while chasing her with a knife "I just want to talk". Reze ended up on the skyscraper of the school along with the strange man and while he made his first move by trying to stab her she evaded his attack, locked her legs around him and got him in a sleeper hold. Thus killing the man and then reveals her true colors when Typhoon Devil appeared as he was scolded by Reze for conspiring with a murderer who tries to kill both her and Denji which resulted on him apologizing and payed his respects to her, referring to her as Lady Reze (or Reze-sama).

As Denji and Reze went to the festival together to see the fireworks, Reze has a talk with Denji in which she asks him to quit his job and run away with her. Denji at first is hesitant due to his crush on Makima, but after a little bit of convincing, Reze surprises Denji with a kiss. This ends up revealing her true colors afterwards as she rips off his tongue with her teeth and attempts to take his heart. However, one of Denji's companions, Beam the Shark Fiend, manages to interfere with Reze's business and save Denji from his impending doom. Reze transforms into the Bomb Hybrid and fights Beam who is then quickly overpowered by her. However, as the Devil Hunters in the festival encountered Reze, Beam escapes from her as she murders the nearby Devil Hunter team.

Seeing that both Denji and Beam manages to escape Reze's watch as they managed to go to the Devil Hunter's Headquarters for the Second Division, she then poses herself as a Damsel in Distress who was seemingly chased by a Demon in order to trick the Devil Hunters in there much to her failure due to one Devil Hunter knowing that there is something off about Reze. As a result, she then decides to change her form into a bomb devil and attacks the headquarters in order to get Denji.

As Denji and his companions attempts to escape by a car, they then encountered Reze who carried several heads from the deceased devil hunter. However, they managed to escape from Reze's grasp with an ensuing fight with Violence Devil. As Denji manages to wake up from his unconscious state, Denji decides to fight against Reze and was rather disappointed on how he was treated afterwards, perceiving that every women that comes to her wants to kill her solely because they were obsessed with his heart. During the fight, Reze was then helped by the Typhoon Devil and was defeated by both Denji and Beam in the end.

After her fight with Denji and the Bureau, Denji wanted to meet up with her again at the cafe were she worked at to finally accept running away with Denji as well as him ditching the Bureau. During her return to cafe for to meet up with Denji, she encounters Makima. While Makima was speaking with her, she mentions her coversation the Reze had with Denji about whether wanting to be the city mouse or a country mouse, Makima told her that she agreed with her as she likes the country mouse herself. Feeling threatened, Reze had her hand on the pin on her neck to turn into the Bomb Devil, getting ready to fight her.

But before that was going to go down, her hand was sliced off by Makima's ability to prevent Reze from transforming, and while Reze reacted and ran up behind Makima, then pulled out a knife to slash or stab her, she was taken out by the Angel Devil from atop of a building by impaling her with a spear and then shortening her lifespan, killing her. Due to Reze's death, it was revealed that Denji had waited in the cafe for a long time until the nighttime comes which resulted on the cafe owner kicked him out due to closing time until Power decides to pick him up.

However, despite her seeming death, it was revealed that in Chapter 86, she was then revived by Makima alongside with Quanxi and were brainwashed together with Katana Man in order to defeat the Chainsaw Man while also becoming a former shell of herself as Makima manipulated her mind. She now expresses an urge to date Makima and is indeed promised a date with her only if Reze and the other Makima's other brainwashed pawns manage to defeat the Chainsaw Man. In Chapter 87, as Reze changed into her hybrid form to defeat the Chainsaw Man alongside Makima's other brainwashed pawns, she was then thrown into the air by Chainsaw Man before returning back in the latest chapter to be decapitated by him as she attempts to attack him. She later on returns in the final confrontation with Denji in order to assist Makima alongside her team of Hybrids, but is quickly defeated and overpowered by Denji.

Reze is never seen again in the finale, although it is implied that she survived the final battle and broke out of Makima's control after her death. It is unknown if she will make an appearance in Chainsaw Man: Part 2. 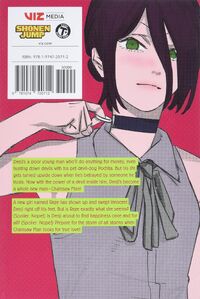 Reze in the back cover of Volume 6. 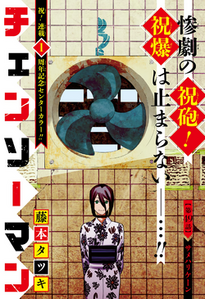 Reze on the colored page of Chapter 49. 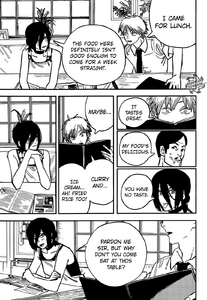 Denji meeting up with Reze at the place she works at. 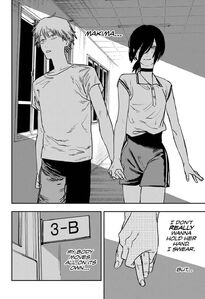 Reze and Denji holding hands together walking inside a school at night. 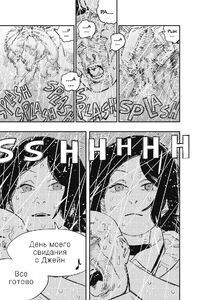 Reze speaking Russian as she strangles the knife-wielding man. 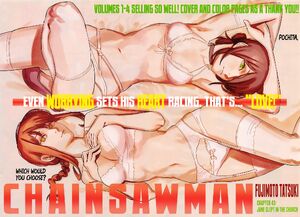 Reze and Makima in Pochita's vision. 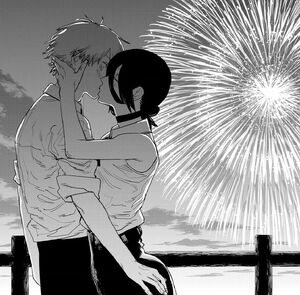 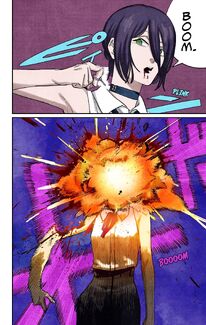 Reze triggering her transformation into the Bomb Devil. 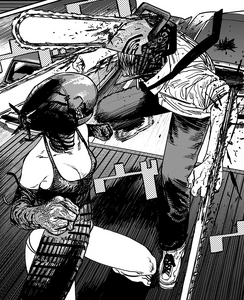 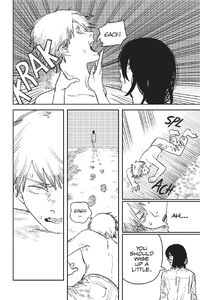 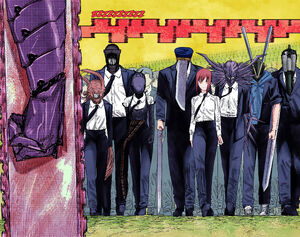 Reze and other Hybrids of Makima's team, on their way to fight "Denji". 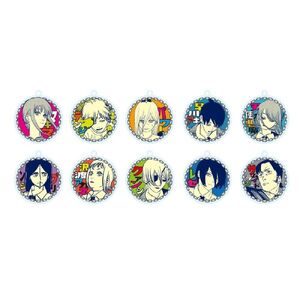 Reze on the prize keychains found on "Makima's Dog Cookies".