The Realm's Delight, the Whore of Dragonstone, King Maegor with Teats, Maegor's Teats, the Half-Year Queen

Monarch, Usurper, Traitor
Princess Rhaenyra Targaryen is an historical figure from A Song of Ice and Fire. She was the first-born and only surviving child of King Viserys I's first marriage, to his cousin Aemma Arryn. To prevent his brother Daemon Targaryen becoming king, Viserys named Rhaenyra his heir when she was 8 and since then she expected to become the first female Queen of the Seven Kingdoms. However Viserys later remarried to Alicent Hightower, and had sons. Alicent tried to have her eldest son Aegon named heir, but Viserys refused to change the succession. Rhaenyra was married to Ser Laenor Velaryon, heir to Driftmark, and had three sons, Jacaerys, Lucerys, and Joffrey Velaryon. However despite having two Valyrian-looking parents, all three had brown hair and pug noses, similar to Harwin Strong, their mother's rumored lover. This led to accusations they were bastards. Laenor was later murdered by Ser Qarl Correy, possibly his lover, who disappeared after the murder. Shortly after this Daemon married his niece (he was rumored to have paid Ser Qarl to murder Laenor, then murdered him). Daemon and Rhaenyra had two sons, the future Aegon III and Viserys II.

When Viserys died Rhaenyra was on Dragonstone. Alicent and the Small Council decided Aegon should be King, as by the laws of succession a son came before a daughter. On hearing of her brother's coronation Rhaenyra miscarried her daughter. Rhaenyra had her own coronation, her husband Daemon placing the crown on her head. She was supported by Laenor's father Lord Corlys Velaryon, Master of Driftmark and the richest man in the Seven Kingdoms.

Aemond had become regent and took most of King's Landing's forces to retake Harrenhal from Daemon Targaryen. However Rhaenyra took King's Landing, though her half-brother escaped. Yet when she took power many were executed, and taxes increased, leading to King's Landing turning against her. She was nicknamed "King Maegor with Teats", after Maegor the Cruel.

Though the current line of Targaryens is descended from Rhaenyra, the official histories do not refer to her as a Queen, and treat her as a usurper, though Aegon II is not regarded well either. Both of them are generally remembered negatively in the history of Westeros. 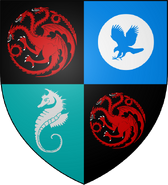 Rhaenyra's personal banner with the heraldry of the houses Targaryen, Arryn, and Velaryon.
Add a photo to this gallery

Retrieved from "https://villains.fandom.com/wiki/Rhaenyra_Targaryen?oldid=1554719"
Community content is available under CC-BY-SA unless otherwise noted.