To rid himself of his suit.

Brutish Supervillain
Aleksei Sytsevich, best known by his alias Rhino, is a minor antagonist in Marvel's Spider-Man. He is a supervillain in a mech suit resembling a rhinoceros and is one of the most well-known enemies of the famous superhero, Spider-Man. After spending years restrained in the Raft, the armored brute is released by Doctor Octopus, who makes him part of his supervillain group the Sinister Six.

Born in Irkutsk, Russia, Aleksei was former mob enforcer of Russian origin, Aleksei Sytsevich became known as the Rhino after having an experimental combat suit grafted to his skin. Rhino was one of the several supervillains that Spider-Man came to encounter early into his superhero career. When he attempted to make off with millions in gold bullions, Rhino collided with Spider-Man, who ultimately subdued him and sent him to the Raft

Now sealed within his rhino suit, seemingly forever, Aleksei wished to shed the mech suit and his thuggish reputation as the Rhino. Later, he was approached by Doctor Octopus, who promised to help him do it – in exchange for dismantling the mayor of New York Norman Osborn and his empire once he's been freed from the Raft.

Rhino was one of the many criminals released during a massive prison break in the Raft. After leading an assault on the prison, Rhino brutally beat Spider-Man alongside other members of the Sinister Six. Afterward, Doc Ock briefed Rhino on his objective.

Rhino's task was to ascertain the supply routes of Oscorp's relief centers and lay waste to them. During an assault on a Sable International outpost, Rhino interrogated two Sable guards for their supply routes and schedules but was interrupted by Scorpion, who apologized to the guards for Rhino's inelegance before killing them both. Miles Morales, who was searching for antibiotics for F.E.A.S.T, saw this and was taken aback, accidentally making noise and causing the Rhino to hunt him down. After an intense hunt, Miles managed to escape the Rhino by staying out of his sight and by tricking him with sounds around the ambient.

Rhino is later intercepted by Spider-Man after engaging Sable officers. Scorpion came to Rhino's aide and together with the two engaged Spider-Man in a battle. During the fight, Rhino and Scorpion constantly bickered with each other, as Scorpion considered Rhino to be stupid, and Rhino considered Scorpion to have no principles. Due to their shortcomings, Spider-Man can defeat the two and trap them in a shipping container, which allowed Rhino to brutally kill the Scorpion. Rhino was then apprehended by the police. 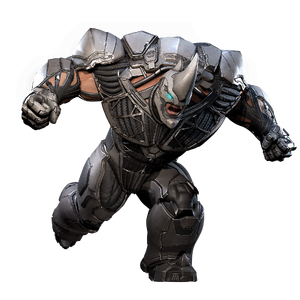 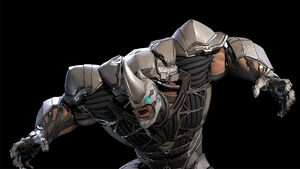 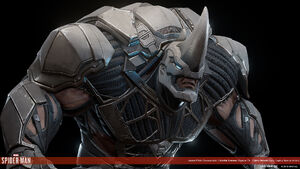 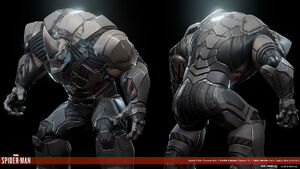 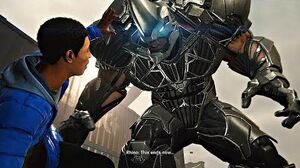 Retrieved from "https://villains.fandom.com/wiki/Rhino_(Marvel%27s_Spider-Man)?oldid=3960652"
Community content is available under CC-BY-SA unless otherwise noted.