Playing jokes on each other.

The Rhino Guards are supporting antagonists in Disney's 21st full-length animated feature film Robin Hood. They are henchmen and minions who are ruled by Prince John, they are known to be gruff and rather stupid. However, underneath their hard exterior, they are fun-loving and like to play jokes on each other. So far, their only appearances are in Disney's Robin Hood and House of Mouse. They appear as obese gray Indian rhinoceroses wearing guard uniforms with blue armor, purple gloves and hoods, purple corduroy pants, and always carrying halberds.

Several of the Rhino Guards follow the Sheriff of Nottingham as they pursue Robin Hood, only for the latter to kick the fat wolf into the guards, before the last four are seen throwing spears at Robin. It is unknown what has happened to them after King Richard returns, they either got imprisoned or changed their alliance to him like Trigger and Nutsy as like the Vultures many of the Rhino Guards were portrayed as simply blindly following the crown.

In the episode "Dining Goofy", two Rhino Guards are seen running away with other various Disney characters, without noticing that they are running over Donald Duck, from the House of Mouse due to Goofy's "helping" and especially his annoying Hawaiian music playing. Sooner or later, they are seen coming back with the same various Disney characters to the House of Mouse, again without noticing Donald. 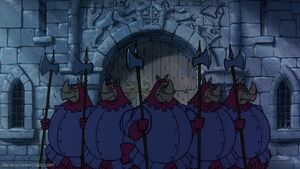 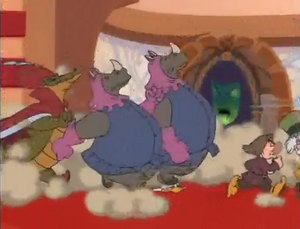 The Rhino Guards in House of Mouse.
Add a photo to this gallery

Retrieved from "https://villains.fandom.com/wiki/Rhino_Guards?oldid=3394509"
Community content is available under CC-BY-SA unless otherwise noted.