The Cape with the Shipwreck and the Scarlet Sands

Using people's dreams to deceive them.

Collecting trophies from his victims.

Lure people in so he can feed on their Life Energy.

The Rhinoceros Fangire, also known by his human alias of Tohru Miyake, with his true name being The Cape with the Shipwreck and the Scarlet Sands is a Fangire of the Beast Class and an antagonist in Kamen Rider Kiva.

He was portrayed by Satoshi Jinbo and voiced by Ryūsaku Chiziwa.

Around 1986, Miyake set up the Atelier Dreams talent agency to lure young people in with the desire of making their dreams come true so he could drain their Life Energy. Once they are position for him to feed on them, the Rhinoceros Fangire takes not only their Life Energy, but a possession of theirs relating to their dreams as a trophy for his "Dream Graveyard".

Miyake tries to lure Wataru Kurenai into his trap, but the boy refuses, so Miyake takes his suggestion to make Kengo Eritate a star instead. The Rhinoceros Fangire was later confronted by Kiva but was able to overpower Kiva in Basshaa Form. However, after discovering that the Fangire was Miyake, a furious Wataru assumes Dogga Form and shatters the Rhinoceros Fangire. 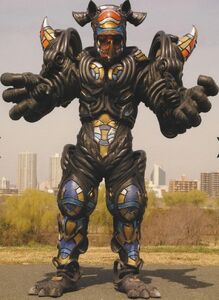 Rhinoceros Fangire
Add a photo to this gallery

Retrieved from "https://villains.fandom.com/wiki/Rhinoceros_Fangire?oldid=3543998"
Community content is available under CC-BY-SA unless otherwise noted.