Each types of Rhynocs members possess their own unique combat skills

Moving from one evil employer to the next.

Stop Spyro the Dragon and his allies to prevent him from ruining their employer's schemes (failed every time).

The Rhynocs are a race of rhino-like creatures that are natives to the Forgotten Worlds and common enemies in Spyro: Year of the Dragon under the command of the Sorceress.

After a thousand years, the Sorceress found a way to employ the Rhynocs (as well as other creatures), much like how Gnasty Gnorc did. She made the Rhynocs her henchmen and used them to fight off Spyro and to capture all the dragon eggs. The artificial creatures are semi-immortal, they live forever as the same soul, though if they die, the Sorceress must bring them back. Chances are that genuine Rhynocs lived in the Forgotten Worlds before the fake ones (Gnorcs).

Ripto controlled the Rhynocs when not using his army of Riptocs, and after stealing the Professor's Laboratory. Rhynocs have not been seen since. 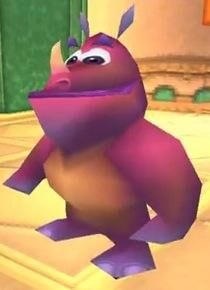 A Rhynoc
Add a photo to this gallery

Retrieved from "https://villains.fandom.com/wiki/Rhynocs?oldid=3996982"
Community content is available under CC-BY-SA unless otherwise noted.