President and CEO of Atlas.

Get revenge of Hugo Vasquez.

Find the Vault of the Traveller.
Gain a high ranking job at the hyperion corporation.

Rhys Strongfork is one of the two main protagonists in Tales From The Borderlands. Depending on the choices that the player made in the game, Rhys can be portrayed as a lovable idiot, or a greedy self centered corrupt official that would be willing to do anything for power.

Like Fiona, Rhys is one of the two of the point of view characters in Tales From The Borderlands.

He is voiced by Troy Baker in Tales From The Borderlands, and Ray Chase in Borderlands 3, who also voiced Marlon from The Walking Dead: The Final Season.

It all depends on how the player decides to play the game, but Rhys can easily be played as a man that cares about no one but himself and takes all credit from other people's hard work, even if they sacrificed a lot to help Rhys become closer to his own goals in life. Rhys would then also be willing to sell out his closest friends and blame them for a crime they didn't commit if it benefited his own goals, or just to gain money.

That same Rhys is also a xenophobe that views the citizens of pandora as simple minded low-lives that he can just bully and talk down to anytime he feels like it. During battles, Rhys loves to use his overpowered machines to strike terror in the hearts of his enemies.

Even if the player does not play Rhys as an antagonist, Rhys does show many villainous traits; such as being smug towards lower class people, having a highly arrogant personality, trash talking people around him, lying to people to gain power, and stealing from others.

Rhys has two nemesis within the game; one being the Handsome Jack AI. Although Rhys is the only person that can see the new Jack, he's aware of the fact that he wants to kill him and his friends to take the Vault for himself. The other person is Hugo Vasquez, who at the start of the game becomes Rhys' boss and uses his power to humiliate him.

Depending on the player choices in the game, Rhys can be capable of many evil and selfish acts that will result in a character getting hurt emotionally or physically and thus resulting the relationship between Rhys and the hurt character being tarnished.

Episode Five: The Vault Of the Traveler 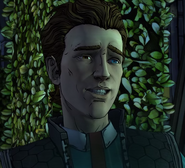 Rhys in the near future
Add a photo to this gallery

Retrieved from "https://villains.fandom.com/wiki/Rhys?oldid=3552309"
Community content is available under CC-BY-SA unless otherwise noted.