Gloating about his wealth and power.
Angrily destroying things.

Ambush the drug deal involving Victor Vance and the Forelli Family to retrieve the money.

He was voiced by Luis Guzmán, who also played Raoul "El Cid" Hernandez in Oz and the Bald Man in A Series of Unfortunate Events.

Not much is known about Diaz's backstory, however at one point he came to Vice City and then established himself as a violent and powerful drug baron in the city. He has a heroic side in GTA Vice City Stories, helping Victor in his vendetta against Sergeant Jerry Martinez. Diaz puts his money in an expensive mansion in Starfish Island. While he built, he does business with Victor and Lance. Upon successful completion of the case, he continues to give the job to Victor. After Diaz learned that Gonzalez gave Juan Cortez, Ricardo takes him under his wing and informs all the actions of Cortez.

His true nature was revealed in GTA Vice City when he was shown to be responsible for Tommy Vercetti's drug deal to go awry knowing it thanks to Gonzalez. While trying to avenge his brother's death in the ambush, Tommy's friend Lance Vance, who worked with Diaz, is captured and tortured by Diaz's men until Tommy rescues him. The two later assault Diaz at his mansion, dispatching all his goons before eventually killing Diaz himself. Tommy and Lance then proceed to takeover over his business, using it as their new base of operations - though Tommy would later kill Lance for betraying him in favor of his former mob boss Sonny Forelli, whom Tommy also kills to officially succeed in becoming the undisputed gangland kingpin of Vice City.

A trigger-happy drug lord, Diaz is quite wrathful. He is prone of violent outbursts, and often lashes out at his goons, as well as destroying various things (even expensive material) inside his villa such as brutally destroying a Ming vase in front of Tommy. A greedy egomaniacal, he is incredibly envious of others, going so far that he orders Tommy to steal a boat in order to keep the fastest boats of the east coast.

In spite of his short temper - which often leads him to take bad decisions - Diaz should not be underestimated as he can be deceitful and traitorous when money is at stake.

Diaz can also be friendly when everything is going well and according to his plans, and treats his associates in a somewhat fatherly manner. That is why he is surprised of Tommy's betrayal and assault of his palace, as he was not aware of Tommy's presence in the ambush, and thought Tommy could have been a great right-hand. 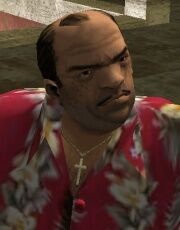 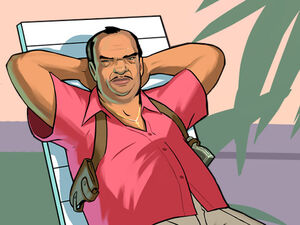