This is about the biblical character. You may be looking for the character from the animated propaganda cartoon Tax the Rich: An Animated Fairy Tale. 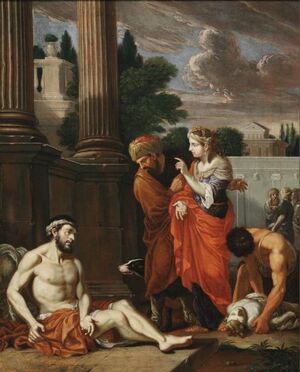 The Rich Man is the titular antagonist of the parable The Rich Man and Lazarus. It was taught by Jesus in the form of a story towards The Pharisees and could be found in Luke 16:19-31.

The Rich Man and Lazarus

In life, the rich man was extremely wealthy, and nearly had all the comforts of the world at his disposal. However, at his gate, there lived a beggar named Lazarus who was very ill-ridden and had sores all over his body. He was very famished, and he would even eat whatever the rich man threw in the garbage. The rich man knew about Lazarus' condition, yet he never bothered to make Lazarus' situation better and was disgusted by his appearance. The only comfort Lazarus received was from a group of dogs who took pity on him and licked his sores.

After a while, Lazarus died, and he was taken into Abraham's bosom. Around the same time, the rich man died as well. He was buried. It was then that the wealthy man woke up in Hell. His suffering was so great, that he looked up and saw Lazarus, the man that he ignored in life, in luxury in Abraham's bosom. He makes a request to Abraham to allow Lazarus to dip his finger in water, and let him cool his tongue with it. Abraham notes however that he never had compassion for Lazarus when they were still alive and that the tables had turned on him and now he was the one suffering in death, whereas Lazarus was finding happiness in the afterlife.

The rich man then realized that his five brothers were in danger of suffering his fate, and he asks Abraham to send Lazarus to them to warn his brothers. However, this request is also denied by Abraham, and he stated that even if Lazarus came back to life, his brothers would still not be convinced and may not change their ways.

The point of the story is that you should help those in need if you're capable, because if you don't, you may need help from them in the future. 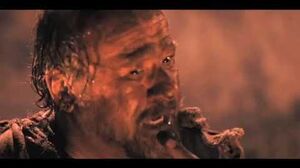