Taking things that he wants by force.

Kill Benson and obtain the suit at all costs (failed).

Mr. Rich Steve simply known as Rich Steve is the main antagonist of the Regular Show episode "Benson's Suit". He is an arrogant evil wealthy businessman man who takes everything he wants by force even if it means by killing the person.

Rich Steve is an arrogant businessman who takes things he wants by force. Rich Steve will kill anyone who doesn't give him what he wants. even if it means hurting or even killing his own henchmen to do so.

Rich Steve is first seen with his two guards going to a clothing store to buy a fancy new suit that will earn him the respect of his fellow peers. The Price of the suit was 100 dollars that was agreed on. But Steve only gave 10 dollars. So the suits creator refuses to give Steve the suit but Steve takes the suit by force by having his two guards kill the suits creator. by blowing him up. Steve takes the suit and runs away form the store while the blast kills the suit's creator and hurting the two guards who somehow survive the blast. But the suit escapes Steve and jumps into the river.

Later Benson while cleaning out the lost and found box comes across the suit. And decides to try it on. Skips points out that it makes Benson look like a new man and that it will earn the respect of his peers. It works out for him and Benson has the respect of everyone including Mordecai and Rigby. But just as things seem good. Steve finds them and threatens them with deadly force if they do not give the suit up. But Benson refuses to give it up. Steve summons his army to assist him in taking back the suit.

Benson and the suit team up and fight the army. The army feeling overpowered decides to retreat. But Steve in a tank charges after them trying to crush them but the strength of the suit overpowers him and launches him in the distance to his fiery death. Later Benson decides to destroy the suit in a washing machine.

The Suit's Creator presenting the fancy new suit to Steve and his two guards.

Steve paying the tailor 10$ even though that's not the price they both agreed on.

Rich Steve's Evil Stare as he breaks down on the tailor for not being happy with the money that was given to him.

Steve telling his two guards to blow up the tailor.

Rich Steve escaping the store with the suit as it blows up with the Tailor and the guards inside.

Rich Steve's Breakdown as the suit escapes and he vows to find the suit once more.

Rich Steve about to fight Benson and the gang.

Rich Steve's evil grin as he orders Benson to give up the suit.

Rich Steve Ordering his Army to come back as they are all overpowered by Benson and his suit.

Steve in a tank as he charges towards Benson.

Rich Steve's breakdown as he charges Benson with a tank to flatten him.

Benson throw's the tank with Rich Steve in it as he screams to his unfortunate death.

Rich Steve's dying in the explosion of his tank, ending his threat on Benson for good. 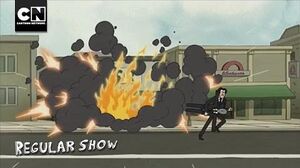 The World's Greatest Suit I Regular Show I Cartoon Network 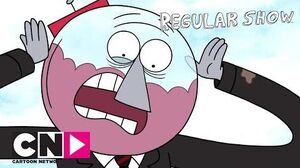