Leader of the Tiger Mafia

Abusing his wives and henchmen.

Kill Captain Alex by himself (failed).

Richard the Tiger Mafia is the main antagonist of the famous Ugandan action web film Who Killed Captain Alex?.

He was portrayed by Sserunya Ernest.

Richard is the leader of the Tiger Mafia, an evil group that completely controls Kampala, the capital of Uganda. The Tiger Mafia is so powerful that even the Ugandian Army has to struggle to take them down.

When Richard's brother, the only person he seem to care about, was captured by the top soldier Captain Alex, Richard sets out for revenge. He sends some henchmen along with his spy to the military camp near their village in order to kill Alex. However, Captain Alex is killed by someone else who is (probably) not one of Richard's henchmen. Instead, they capture two soldiers in order to interrogate them.

Richard then gets even more angry than usual since he wanted to be the one responsible for Alex's death. Therefore, Richard wants to find and kill Captain Alex's murderer instead (whoever it is however, is never revealed in the film). He interrogates the soldiers to tell him who killed Captain Alex, but they themselves don't know.

The army is also confused who killed Captain Alex, but still highly believes that Richard and the Tiger Mafia is responsible, so they begin to invest more effort in order to take down Richard and the Tiger Mafias. However, Richard has a secret informant in the military who tells Richard whatever the army is planning. He is informed that the army will use combat helicopters, so Richard needs to steal one of them.

Richard sends one of his men to steal a combat helicopter belonging to the army in order to destroy every meaningful buildings in Kampala to distract the military. Meanwhile, Captain Alex's brother, who is a skilled Kung-Fu fighter, is trespassing the Tiger Mafia base and is brought to Richard, who tells three of his henchmen to fight him. The military eventually destroys the mafia-base with a combat helicopter and Richard and the mafia escapes to a forest where they will meet the army.

During the final shootout, Richard manages to take down two helicopters along with some soldiers but gets shot himself and taken to custody.

Richard is very wrathful, vengeful, authoritative, impatient, abusive, sociopathic and allmost completely heartless. Unlike crime lords in general, who are often charismatic, sophisticated or at the very least affable at some moments, Richard is constantly showing anger and no politeness whatsoever. He was very abusive towards both his henchmen and his wives. He often abused or even killed his wives whenever he got really mad (he has so many wives they are expendable). The only person he seemed to care about was his brother. 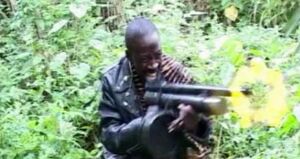 Richard during the final shootout.
Add a photo to this gallery
Retrieved from "https://villains.fandom.com/wiki/Richard_(Who_Killed_Captain_Alex%3F)?oldid=3638962"
Community content is available under CC-BY-SA unless otherwise noted.