Searching for his brother, Talking about money

Reunite with his brother

Richard Buchanan (リチャード・ブキャナン Richādo Bukyanan), formerly known by the codename Hoteye (ホットアイ Hottoai), is a member of the Oración Seis, a dark guild composed of highly powerful Mages whose goal is to find Nirvana, a destructive power that was sealed away long ago. After his release from prison, he joined Crime Sorcière per Jellal's request to help him take down Zeref. He is the elder brother of Wally Buchanan.

He was voiced by Kazuya Ichijō in the Japanese version of the anime and by Chris Cason in the English version, the latter of whom also voiced Shu and Gluttony.

The tallest member of Oración Seis, Richard is a large and imposing man whose appearance is peculiar in the fact that he looks both quite feminine and, most curiously, has a body consisting of geometrical forms with sharp angles, not possessing rounded parts. What this stems from is unknown, as Richard, unlike his brother, hasn't displayed the use of Polygon Magic. He has long, wavy and flowing orange hair reaching down below his shoulders, bright blue eyes with long eyelashes, a prominent, flat nose and full, red feminine lips. His large forehead tops his eyes directly, due to the seeming lack of eyebrows. His massive torso and arms look even more massive if compared to his head, relatively small in comparison, and to his thin legs.

Richard's outfit consists of a loose black shirt, with light sleeves adorned by a series of dark merged rhombuses, a large, white collar closed on the front going down to cover his shoulders and a sash tied around his waist, visible under it, and simple light pants tucked inside light boots, with the parts circling his calves being reminiscent of leg warmers. Circling Richard's neck is a large necklace made of brown beads, which has a pendant hanging from it, this taking the shape of an eye flanked by two small, wing-like protrusions. Richard is almost always shown carrying around a book in his right hand, whose light cover bears, inside a rectangular part with angles curving inwards, a large, dark letter "J".

Seven years after his imprisonment, Richard has undergone small changes; although he still wears the same outfit, his hair has grown thicker and he also dons a pointed mustache.

Richard seems to have an obsession with money, as well as a habit of ending his sentences with "Right?" or "Exactly!", and tends to preach out his own personal anecdotes about money and riches to anyone within his vicinity, even in circumstances where it is obviously unnecessary and exorbitant, much to the chagrin of those present to hear him, including his own comrades. He is almost always holding a book close to him, which has the Jewel symbol on it, a possible reference to his obsession with money.

After the effects of Nirvana, however, his personality changes drastically, and he becomes much kinder with his desires changing as well. He gives up on his obsession with money and becomes a person full of love and goodness. He sets a new goal for himself, which is to find his only brother, Wally.

Richard and his brother Wally Buchanan lost their parents at a very young age and lived on cultivating potatoes. They were presumably captured by the Cult of Zeref and forced to become slaves of the Tower of Heaven.

He, along with the other Oración Seis members, promptly defeat the alliance of Fairy Tail, Blue Pegasus, Lamia Scale, and Cait Shelter, on their first meeting. Brain later assigns him to look for Nirvana along with Angel and Cobra.

Hoteye later runs into Jura Neekis, and they fight using their respective Earth-based Magic. They stop fighting when they spot a pillar of light coming from Nirvana's unsealing, with Jura being conflicted between fleeing to investigate Nirvana and defeating Hoteye. Before he can decide, Hoteye's personality suddenly switches due to the effects of Nirvana's unsealing, which results in a sweet persona with no aggression coming to the surface, much to Jura's confusion and bewilderment. Nirvana changes his alignment from evil to good due to his previous ambiguity, and so Hoteye proceeds to reveal that searching for his lost younger brother led to his obsession with money, as he believes it to be the only means of finding him. Hoteye then happily hugs Jura and declares his wish to stop his comrades, the Oración Seis, from going on with their evil ways and teach them "the beauty of love". The two then climb up one of Nirvana's legs when its second stage is activated.

They soon encounter Lucy and Gray, and Hoteye explains to them that Nirvana was originally used to keep the power of Light and Dark in check and its creators never intended it to be used as Magic. Before he could elaborate, Midnight attacks after realizing Hoteye's defection. Hoteye, however, saves the group from the attack and decides to face Midnight while the group proceeds ahead. Hoteye's unique eyesight gives him an advantage over Midnight, allowing Hoteye to overwhelm the younger Mage. However, this victory is short-lived as his opponent proves to be an illusion since Midnight defeated Hoteye using the same lacerating ability that felled Eve Tearm and Ren Akatsuki. As Hoteye falls, he states that his prayer was to see his brother for one last time.

Later, after recovering Hoteye saves both Natsu and Jellal from Nirvana before it collapses on itself. In the aftermath of the battle, Hoteye is arrested by the newly reformed Magic Council, and he accepts this as repentance for his past sins. Before being taken away, Jura tells him he will take his quest of finding his brother for him and asks what his name is, and Hoteye responds that his name is Wally Buchanan. Erza, recognizing the name, describes her encounter with Wally, a fellow former slave; Wally is safe and well, and the last time she heard from him, he was traveling around the continent. Hoteye falls to his knees and breaks into tears, thanking them for the good news. He is then formally arrested and led away by Lahar and the Magic Council Detention Corps Division 4.

Seven years later, Hoteye is released from prison thanks to Cobra and comments on how their love has been received. He then watches with a shocked expression, alongside the rest of his guildmates, as Cobra viciously assaults Brain. As the rest of his guild discusses what to do next, as they are finally free, Hoteye reveals his desire to see his brother, but Cobra stops them, informing them all of their first job's arrival, as Jellal and Meredy approach them.

As Jellal approaches the Oración Seis and Hoteye's fellows start to attack Jellal, he states that he no longer wishes to fight, leaving Angel to wonder if he is still under the influence of Nirvana. Hoteye explains to her that this is his true personality, which ends up with him being berated by his comrades when he mentions that he will gladly submit to Jellal's will, though he is, surprisingly, backed up by Midnight, who tells them all that they can do whatever they wish with their freedom, and that "Richard" is no different. He then watches as Racer, Cobra and Angel fight Jellal. He listens as Midnight explains to Jellal that they are finally free after all this time they spent as pawns, but Jellal replies that they cannot be called free while remaining in the darkness, and that he shall be their liberator, something that he will achieve by defeating them. Hoteye then watches as Jellal is interrupted and fatally wounded by Zero.

Hoteye quickly sees, however, that Zero's killing of Jellal is but an illusion; Jellal reappears before the Oración Seis, breaking through Midnight's visual trickery. Hoteye then watches as Jellal quickly defeats the four fighting Mages with Grand Chariot and Sema, noting that Jellal's Heavenly Body Magic is extremely fearsome. However, when Hoteye hears that Jellal wishes not to return them to prison or kill them, but rather have them join his guild, Hoteye's eyes go wide in shock.

Eventually, the group decides to tag along with Jellal and join Crime Sorcière, paying a visit to Magnolia, where Richard witnesses the love behind Jellal's words of support to Erza. They turn to leave, keeping in mind that their sole objective is to bring down Zeref and cease his evil deeds.

Richard and his comrades arrive in the north, at Zonia, to assist in the war against the Alvarez Empire; Richard corrects Macbeth that they are now Crime Sorcière when the latter comments that the time to display the full power of Oración Seis has come. Before he and his comrades can do anything, however, Richard is caught in the light of Irene Belserion's Universe One and is warped to a new location.

Earth Magic: Richard possess strong Earth Magic, which he employs as the main component of his fighting style.

Enhanced Reflexes: Richard is shown to have rapid and accurate reactions, as seen when he instantly liquefied the ground under his companions, saving them from Midnight's slicing attack.

Immense Magic Power: As a member of the Oración Seis, Hoteye has great amounts of Magic Power, enough to potentially break down an entire guild on his own, as well as worthily holding head to the power of Jura Neekis. 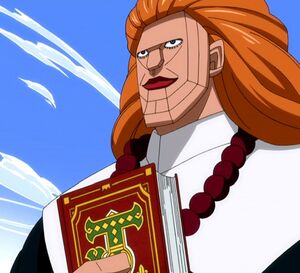