Founder and leader of the Longbow Hunters

Kill the Green Arrow and John Diggle to avenge his father (all failed).

Ricardo Diaz, Jr., better known as Richard Dragon, is a villain in DC Comics, and an enemy of the Green Arrow. He is the leader of the Longbow Hunters and a crime lord based in Seattle. He was the main antagonist of the Jeff Lemire/Andrea Sorrentino run on the Green Arrow comic series.

Ricardo Diaz, Jr. was trained by the League of Assassins and vowed to take revenge on the Green Arrow after watching him and John Diggle humiliating his father. Diaz eventually murdered his mentor, the first Richard Dragon, and took his name for himself.

Returning to Seattle, Richard Dragon started to take down several crime lords in order to take over their turfs. When Count Vertigo started his attack on Seattle, Dragon tracked down Shado and fought and easily defeated her while she was on her way to stop Vertigo.

He left a message for the Green Arrow with her - that the Arrow could accept his supreme reign over Seattle or die. Later, Dragon assembles a group of villains, the Longbow Hunters, to collect the bounty on the Green Arrow's head.

Green Arrow is able to defeat all of them with the help of his young half-sister, Emiko. Green Arrow is then reunited with Diggle, after Dragon attempts to kill the latter by defenestration. In a fight against both Arrow and Diggle, Dragon is able to significantly injure both of them but is ultimately defeated.

Diaz made his live-action debut in the TV series Arrow, where he appeared as the main antagonist of Season 6 and the central antagonist of Season 7. In this iteration, he is a powerful and ruthless drug kingpin known by his street name the Dragon and he is revealed to be the mastermind behind Cayden James's vendetta against Oliver Queen in his plot to take over Star City. After being locked up for his crimes halfway through Season 7, he is burnt to death by the Ninth Circle leader Emiko Queen.

He was portrayed by Kirk Acevedo. 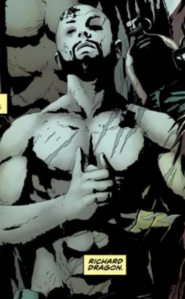 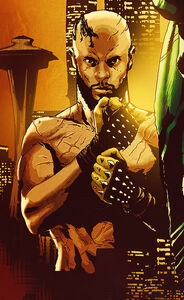 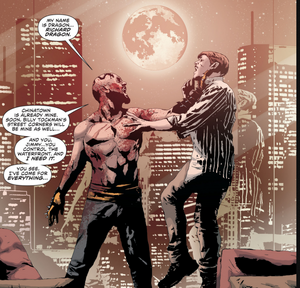 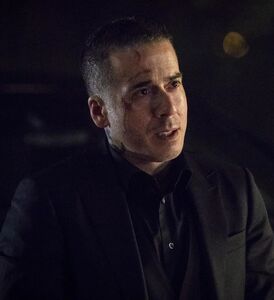