Find Donna Keppel and make her his forever (Failed after his death).

Richard Fenton is the main antagonist of the 2008 remake of the horror movie, Prom Night. He is a former high school teacher who fell in love with one of his students named Donna Keppel whose whole family were murdered by him.

He was portrayed by Johnathon Schaech who played Mike Franks in the episode "The Washingtonians" of Masters of Horror.

Fenton is a 37 year-old former teacher at Bridgeport High School in Bridgeport, Pennsylvania, who developed an obsession with one of his students, a 14 year-old girl named Donna Keppel.

When she rejected him, he became violent. He was then fired when she told the principal about him and her parents filed a restraining order which that did not stop him as he broke into their house, killing almost the entire family including her younger brother Joey except for his former student.

He was caught and placed in a maximum security prison for the criminally insane by Detective Winn while Donna lived with her aunt Karen Turner and her uncle Jack, but he escaped 3 years later.

He then tracks down his former student, Donna, to her prom and began a crazed search for her.

First, he murdered a man named Howard Ramsey and hid his body in his car trunk. He then went inside the hotel where the prom was under Ramsey's name and rented a room on Donna's floor.

In order to locate Donna in her room, Fenton murdered the housekeeper to obtain the master key, hiding his body in the room. Later, he encountered one of Donna's friends, Claire whom recognized him as Fenton.

To keep her quiet, he then grabbed her by the throat and stabbed her to death. Upon hearing Michael, Claire's boyfriend, coming he attempted to hide in the closet but Michael saw the door being shut.

When he opens the door, Fenton jumps on Michael, knocking him to the ground and stabbing him to death.

His efforts were in danger when Detective Winn, the man who caught and arrested Fenton, showed up at the hotel and warned the staff.

He then had to kill an employee that was looking for the housekeeper in order to keep his death a secret, he also stole the employee's uniform as a disguise.

Afterwards, when Fenton took an elevator, he encountered two more of Donna's friends, Lisa and Ronnie who did not recognize him.

Lisa later realized it was Fenton and tried to warn Donna, but Fenton catches her on the way which he gave chase to Lisa to the lower floors and began a search when she tried to hide.

Upon hearing Ronnie calling out for her, Lisa attempts to run for it but Fenton grabs her and slits her throat.

Winn and his partner, Detective Nash, find the body of the real Howard Ramsey in his car trunk.

When they investigate the apartment under Ramsey's name, they find the housekeeper's body, prompting Winn to sound the alarm, exposing Fenton and having the hotel evacuated.

Before leaving, Donna went back upstairs to get her mother's shawl, but ran into Fenton. Fenton was delighted to see her again and instantly attacked her.

Winn realized Donna was still inside and raced back inside to save her, while she managed to escape Fenton, much to his dismay. SWAT and police then entered the building in search of Fenton.

Unable to stay any longer, Fenton put on the employee's uniform and fled the hotel, heading for Donna's house to finish his obsession.

When he arrived outside the house, he found an officer guarding the back of the house and Detective Nash in his squad car in front of the house.

Then, Fenton ambushed, killed them both off-screen to clear the way, snuck inside the house and murdered Donna's boyfriend, Bobby by slitting his throat off-screen.

He then hid in the closet, waiting to ambush Donna who was in the bathroom at that time. He was unaware that Winn is fast on his trail as he realized that Fenton left the hotel and has found Nash dead in his squad car.

Then, Donna returned to her room and found Bobby dead. She then saw Winn's shadow in the hallway and hid in the closet, thinking that it was Fenton. When she realizes it is Winn, Fenton grabs and quiets Donna in the closet.

Winn is about to check the closet when he hears a scream from Karen from noticing the dead officer outside, so he runs to her bedroom.

Donna bites Fenton's hand after Winn leaves and tries to escape. Fenton tries to restrain her, leading to a violent struggle.

The struggle ends with Fenton subduing Donna and preparing to stab her. Just before this could happen, Winn, who had heard the struggle, runs in and finds Fenton. He then shoots Fenton seven times, finally killing him.

After he was dead, Donna cried over her boyfriend's corpse, with Winn trying to reassure her that with Fenton dead, it is now finally over. 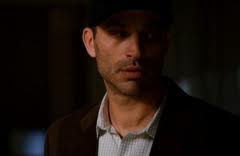 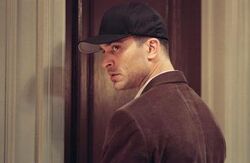 Add a photo to this gallery
Retrieved from "https://villains.fandom.com/wiki/Richard_Fenton?oldid=3707186"
Community content is available under CC-BY-SA unless otherwise noted.