Commander of the Chronos Corporation (formerly)

Member of the Council of Twelve (formerly)

Obtain a Guyver unit and claim its superhuman powers.

Overthrow Chronos and take over the world (all failed).

Richard Guyot is one of the primary antagonists of the anime/manga series Guyver: The Bioboosted Armour. He is a maniacal, power-hungry monster and a traitorous member of the Zoalord Council, the twelve leaders of the Cronos Corporation.

In the English version, he was voiced by Bill Wise, who also voiced the brainwashed pizza man under the false alias Screenslaver in Disney/Pixar's Incredibles 2. In the Japanese version, he is voiced by the late Kinryû Arimoto.

The earliest known history of Guyot is when he was chosen by Cronos's ruling council for Zoalord optimization. The process was long and invasive and had yielded many failures in previous test subjects, but Guyot survived it and emerged as a super-powerful soldier and commander.

When he first appeared in Guyver, Guyot had been sent to Cronos' Japanese branch to take over from its then-manager, Genzo Makishima, who had been reprimanded due to his failure to retrieve the lost Guyver units. He had Makishima imprisoned and later sentenced him to Zoanoid processing as a test subject. While stationed at Cronos Japan, Guyot assigned the powerful Hyper-Zoanoids Noskov, Melmozee and Zerbebuth to engage Sho Fukamachi - host of the first Guyver unit - in battle. When these soldiers failed, Guyot used the disgraced Makishima to create Enzyme, a prototype Zoanoid designed specifically to destroy Guyvers. Under Guyot's control, Enzyme succeeded where all other Zoanoids had failed and killed the Guyver, removing the armour's control medal and causing the armour to overload and eat its host alive. With the Guyver's control medal retrieved, Guyot commanded Enzyme to self-destruct.

Although Guyot had succeeded in killing Sho and taking his control medal, he was unaware of the extent of the Guyver's regenerative capabilities. The control medal managed to completely rebuild Sho's body from the small amount of his DNA lingering on it. When resurrected, Sho did not immediately regain consciousness and the Guyver began operating on its own, breaking out of the laboratory and slaughtering every Zoanoid that stood in its way. Guyot's forces were completely unable to stop Guyver-1's rampage and the commander attempted to escape from Cronos Japan via helicopter. However, Guyver-3 - who's identity had not yet been revealed - had planted a bomb on Guyot's chopper which detonated once the chopper took off. Once Guyver-3 had helped Sho to regain consciousness, the two Guyvers demolished Cronos Japan, leaving only a pile of burning rubble and no survivors... or so it seemed.

As it happened, Guyot survived the helicopter explosion. Worse still, he suspected he knew the truth about Guyver-3's identity: Agito Makishima, adopted son of Genzo and trained by Cronos as an elite operative. His suspicions were correct as he visited Makishima's mansion to inform him of Cronos's next operation to capture Sho Fukamachi. Agito donned his Guyver suit in another room and then attacked Guyot, who resisted with inhuman strength. Since Guyot had backup in the form of the Lost Numbers, Agito made a hasty retreat. Guyot then traveled to Cronos's secret headquarters at Mount Minakami, also known as Relic's Point. There, he joined forces with Cronos's top scientist and another member of the Zoalord Council, Dr. Hamilcar Barcus, and told the doctor everything he knew regarding the Guyvers.

While at Relic's Point, Guyot assisted Barcus with the retrieval of the Guyvers, while at the same time pursuing his own agenda. As it happened, he and a Cronos scientist Dr. Shirai were researching an alien artifact that Cronos had discovered along with the three Guyver Units. The device turned out to be a Unit Remover, designed to separate a Guyver Unit from its host and turn it back into a dormant unit. With the Remover, Guyot planned to remove Sho and Agito's Guyvers and take one as his own. Combined with his already extraordinary powers as a Zoalord, a Guyver unit would make Guyot a god amongst men. However, Guyot's rebellious plot did not go unnoticed by Cronos's other leaders. Cronos's supreme ruler and founder Arcanphel had become aware of the Unit Remover and confronted Guyot personally. Guyot transformed into his battle form, a towering horned monster with the power to manipulate gravity at will, and did battle against Arcanphel. The fight ended up tearing Relic's Point apart, with Guyot throwing all of his might into the battle, but Arcanphel effortlessly resisted all of Guyot's attacks. As a final resort, Guyot unleashed his most powerful ability: he created a quasi-black hole that began to rip apart the base further, and if left unchecked could destroy the entire planet. Arcanphel was sucked into the black hole, seemingly destroyed, and then Guyot (with aid from Dr. Barcus) closed the singularity.

As the base was being torn apart, several of Cronos's enemies - namely the Guyvers and their friends - emerged from the base's lowest levels where they had been sheltered by a group of rebel Cronos scientists. Upon discovering the Guyvers and their attempt to raise the ancient alien ship that Cronos had been researching at Relic's Point, Guyot summoned the Unit Remover and did battle against Guyvers 1 and 3, and also Masaki Murakami, who had once been a test subject for the prototype of Guyot's Zoalord form. The battle was furious and Sho Fukamachi - who was inside the alien ship - managed to raise the Creator relic, taking the battle outside and causing the Mount Minakami base to collapse. Guyot fought against two Guyvers and a prototype Zoalord alone and seemed to hold his own well, managing to kill Murakami and rip out the dummy Zoacrystal in his head. However, before he was able to use the Unit Remover on Sho and Agito, the alien relic was attacked by Dr. Barcus and the other Zoalords, including Arcanphel, who had somehow survived Guyot's black hole and had returned in his Zoalord form. Surrounded on all sides, Guyot had no chance after all the fighting he had just been through. Arcanphel fired a tremendous blast of psionic energy that killed Guyot and destroyed his Unit Remover.

In his human form, Richard Guyot appears as a middle-aged man with dark skin, green eyes, and a tall blonde flat-top. He usually wears a white business suit. His Zoalord form is inhumanely tall, with his skin bone white with black patches where his muscles are more pronounced. He has long and gangly horns atop his bald head, his eyes are wholly yellow with no pupils or irises, and he has a large red Zoacrystal embedded in his forehead.

Like all of the Zoalords, Guyot possesses immense physical strength, even in his human form. He also wields telepathic powers and can communicate with the other Zoalords over long distances. He is also capable of controlling Zoanoids and they will follow any command he gives them. In his Zoalord form, Guyot possesses the additional power of gravity control. He can levitate, increase or decrease gravity over a wide area and fire off micro-black holes like bullets from his fingertips. He has also demonstrated the ability to form larger black holes that will grow as they consume more mass, such as the black hole he created to defeat Arcanphel. 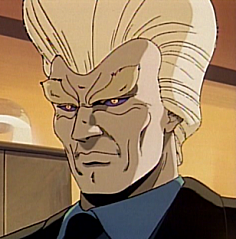 Guyot in the OVA. 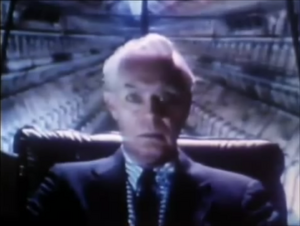 Gouo, the live-action counterpart of Guyot, in Guyver 2: Dark Hero. 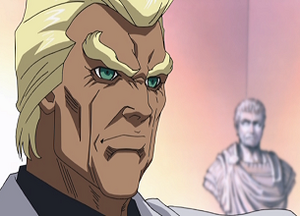 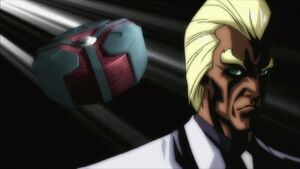 Guyot sought to attain the Guyver Unit for himself. 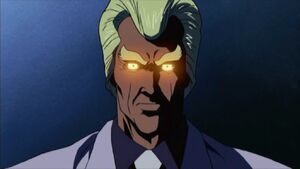 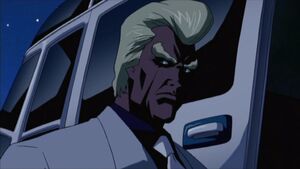 Guyot being confronted by Guyver I and Tetsuro. 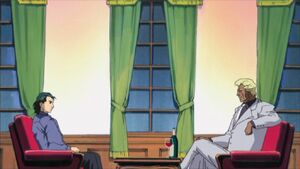 Guyot surviving the assassination on his life and meeting Agito Makishima. 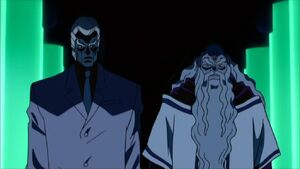 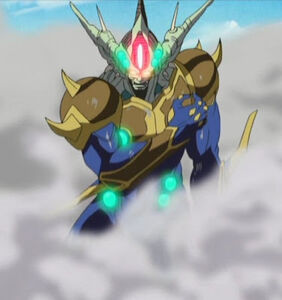 Guyot in his battle armor. 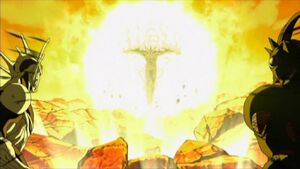 Guyot releasing his gravity crusher attack against the Guyvers. 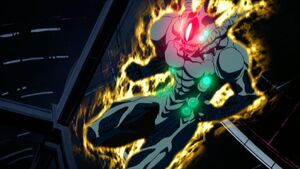 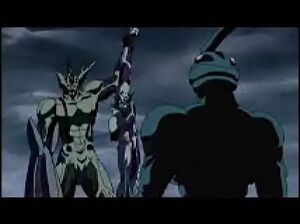 Guyot holding Unit Remover and the defeated Murakami.
Add a photo to this gallery
Retrieved from "https://villains.fandom.com/wiki/Richard_Guyot?oldid=3707193"
Community content is available under CC-BY-SA unless otherwise noted.