Manipulating to the rootless second and third-generation billionaires of the world.

Manipulative Con Artist
Richard J. Magee is the sixteenth elusive target in HITMAN (2016) and later returned as a Legacy Elusive Target in HITMAN 2 (2018), the latter of where he appeared at the same time with Anthony L. Troutt.

Richard Magee was a manipulative self-help guru and counselor. He was also a con artist and fraud, who combined a fatherly attitude with a strong understanding of manipulative psychology to manipulate his victims. He drove wedges between inter-vivos-fund babies and their parents and he makes an excellent living in doing so.

Several of his protégés were former members of the Church of Ascendants, though that organization does not seem to be directly involved in Magee's activities. His current mark is a man named Keith Kebble. Keith's parents hired the ICA and Agent 47 to assassinate Magee in order to save their son (and his trust fund).

Outwardly charming but narcissistic, manipulative and cruel, Magee pretends to be a compassionate mentor when he's really leading people to financial ruin for his own personal gain. Magee makes people emotionally dependent on him so he can cake control of their financial assets. A tactic of his is to make people abandon their families so they can give him control of their money. 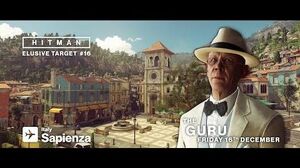 HITMAN Elusive Target 16 The Guru
Original in-game briefing in HITMAN (2016).
Add a photo to this gallery

Retrieved from "https://villains.fandom.com/wiki/Richard_J._Magee?oldid=4180252"
Community content is available under CC-BY-SA unless otherwise noted.