Richard "Dick" Jones is the main antagonist of the 1987 sci-fi action film RoboCop .

He was a corrupt businessman and the senior vice president of Omni Consumer Products, as well as the employer of nefarious crime boss Clarence Boddicker as they both sought to eliminate their sworn enemy RoboCop. Additionally, Jones was the main responsible for the Detroit Police Strike when he authorized the officers to destroy RoboCop for him; however, his orders were eventually put to an abrupt end when his boss Old Man fired him for murdering fellow employee Bob Morton and ordering former police squad leader Lt. Hedgecock to destroy RoboCop. His counterpart in the remake is Raymond Sellars.

He was portrayed by Ronny Cox, who also played Vilos Cohaagen in the 1990 sci-fi action film Total Recall, and Dr. Samuel Delazo in the 2002 horror suspense film, Crazy as Hell and as Eli Maccleary in the 1982 horror film, The Beast Within.

Dick Jones has an interest in seeing Omni Consumer Products (OCP) become successful. Not only is he one of the Vice Presidents of the company below the CEO, also known as "The Old Man", and in line to reap the profits of any big sales, but now that the company has the opportunity to supply the military with their products, the financial benefits could be enormous. So all Dick Jones has to do is stay in power as the Old Man's right hand man and squash any challengers to his throne, like Bob Morton.

Bob Morton is a young, arrogant, amoral but inventive executive at OCP. He got a pet project ready to go immediately as soon as one of Dick Jones' own demonstrations, the ED-209 urban pacification model, goes haywire and kills an OCP employee. The Old Man is impressed when Morton's RoboCop program goes online and joins the Detroit Police force where it proves a spectacular success, but Jones loathes this ambitious upstart and wants to shut him and his "bastard creation" down. So Jones hires a cop killer by the name of Clarence Boddicker to take out both obstacles in Jones' way. With RoboCop out of the picture, he could roll the ED-209s back out onto the streets. Even if they don't work, OCP will provide expensive spare parts for years to come. But while Morton perishes in an explosion, RoboCop cannot be killed so easily. In fact, RoboCop brutally interrogates Boddicker and discovers that Dick Jones is behind the whole scheme.

With a visual record of Boddicker's confession in his memory, the cyborg storms in on Dick Jones and prepares to arrest him. That is when RoboCop discovers the mysterious Directive 4, which has been programmed into his system. Jones explains that any attempt by him to arrest a senior officer of the company will result in immediate shutdown. RoboCop tries to fight off his programming, but when Jones brings in an ED-209 to take care of him, his priority is to get out of Jones' office alive when it became clear that ED-209 was superior to RoboCop in firepower and strength. During this point, believing that RoboCop will soon die, Jones boldly confesses to him that he murdered Morton in an effort to "erase his mistake", that "mistake" being RoboCop himself. After barely escaping from ED-209, RoboCop is then confronted by a Detroit Police SWAT team led by Lt. Hedgecock, who attempt to destroy him under order from Jones. RoboCop, having sustained extensive damages by ED-209's relentless assaults during his escape, was vulnerable to SWAT team's barrages of gunfire that should have been normally harmless. Anne Lewis, having been alerted by Kaplan and the others of Lt. Hedgecock's attempt to murder RoboCop, intervenes and saves him. RoboCop escapes but has been branded a fugitive by his own police force. Jones' orders to destroy RoboCop also results the Detroit Police to go on a strike and Lt. Hedgecock was presumably relieved as SWAT leader for obeying the orders to destroy RoboCop and indirectly triggering the police strike.

After a quick negotiation with Boddicker who refuses to deal with RoboCop any further, Jones hands over an arsenal of military weaponry to finish RoboCop off. RoboCop fights off the whole crew and takes down Boddicker once and for all, but still has to deal with Jones. RoboCop storms an OCP Senior Meeting and explains the situation to The Old Man himself: Directive 4, Clarence Boddicker, Bob Morton and ordering Lt. Hedgecock to destroy him. Jones begins to panic, and tries to convince the others that RoboCop is lying, until he delivers the most damning testimony from Dick Jones himself: a visual record from his memory of Jones admitting he "had to kill Bob Morton because he made a mistake." As everyone finally sees Jones as the selfish and narcissistic man he truly was, Jones then pulls out a handgun and tries to take The Old Man hostage and escape, but The Old Man comes up with the best move of all: "Dick, you're fired!" No longer part of OCP, this announcement shuts down the Directive 4 and RoboCop thanks him. As The Old Man manages to break free and get out of the way, RoboCop then fires several shots at a shocked Jones, who falls through a window, sending him to his death dozens of stories below. After his death along with Clarence Boddicker and his gang, a new organization called Nuke Cult led by Cain to rise.

Dick Jones was a corrupt executive who despised anyone who threatened his position of power, such as Bob Morton or his creation RoboCop. While he possesses charisma and showmanship like a businessman would, Jones displayed a blatant lack of empathy even before revealing his murderous side. This was shown when ED-209 killed one of the board members of OCP; he simply writes it off as a glitch to The Old Man and claims he would fix it. Jones showed disgust and contempt to his younger rival Bob Morton who was gunning for his position, although in a twist of irony, Jones remarked that Bob and he shared some similarities, especially when he was younger and cockier; however, when he went over his head to The Old Man, it proved to be the last straw for Dick. He angrily threatened Bob in the men's latrines and then hired a nefariously sadistic criminal, Clarence Boddicker, to murder him.

Aside from this, Jones displayed hatred towards Morton's creation, RoboCop, claiming that he was his "bastard creation" and describing him as product while Directive 4 was being activated. He also ordered RoboCop's Detroit police force to destroy him, leaving his close partner Anne Lewis as his only reliable ally along with Warren Reed, Kaplan, Manson, Ramirez, Cecil, Chessman and Starkweather, who refused to obey the orders.

Jones loved to gloat over his victims, specifically when he believed that there was nothing they could do. This showed when he had Boddicker play to Bob Morton a disk with Dick ruthlessly gloating over the injured businessman and yet again when RoboCop prepared to arrest him but ended up being nearly shutdown because of Directive 4, Jones claimed that he was nothing more than a mistake and planned to erase him as you would which led to the rest of OCP to discover his true nature at the climax of the film. 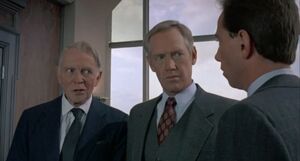 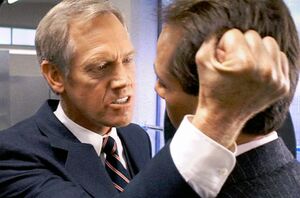 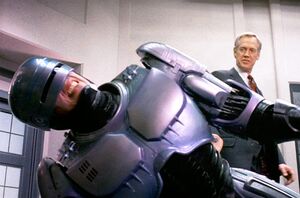 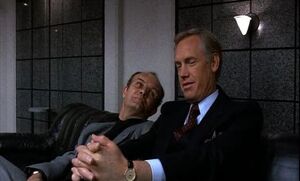 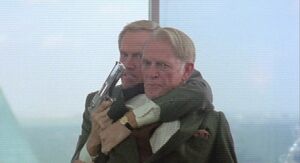 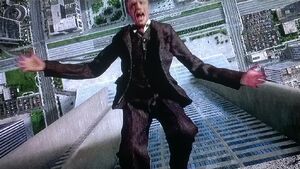 Dick Jones falling to his death as his orders to destroy Robcop on the Detroit Police force is put to an end.