Performing experiments on his machine.

Find the secret of immortality (succeeded).

Professor Richard Lazarus is the secondary antagonist in the third season of the Doctor Who revival series.

He was an elderly scientist and a close ally of Harold Saxon who feared death and wished to avoid it and restore his youth. He finally managed to achieve this goal after striking a deal with Saxon on funding the technology. Although it restored his youth, the technology drastically mutated his DNA beyond repair.

He was portrayed by Mark Gatiss, who also serves as one of the series' writers and also played Hilary Briss and Val Denton in The League of Gentlemen, as well as some of the Vogons in the 2005 film adaptation of The Hitchhiker's Guide to the Galaxy.

Lazarus was born shortly before the Second World War and grew up in the middle of the chaos it caused. On one night of the Blitz he hid himself inside of the Southwark Cathedral, traumatised at all of death and mayhem surrounding him. Although he lived, Lazarus was extremely psychologically damaged, swearing to himself he would never face death again.

Growing up, Lazarus gained wealth and recognition as a genius scientist and married sometime in his adulthood.

During his rise to power, The Master/Harold Saxon approached Lazarus and the two struck a deal to get what they both wanted. The Master agreed to fund Lazarus' technology and the experiment to restore his youth, on the conditions that he get his own supply of the tech built into his laser screwdriver and that Lazarus ensured to hire Tish Jones as the head of his PR department in an attempt to lure The Doctor and Martha Jones, Tish's older sister and the Doctor's current companion, into his grand plan.

Eventually Lazarus managed to build the machine to reverse the ageing progress and shows it off in a public.

During the demonstration, Lazarus steps inside the machine to test it out; however, it goes haywire and the Doctor moves in to shut it down, to avoid destroying the building and everyone inside, including Lazarus himself. Lazarus then stepped out of the machine looking roughly four decades younger, and the crowd are astonished with the machine deemed a success. While celebrating, however, Lazarus quickly began experiencing rapid muscle spasms, bone crunches and extreme hunger for unknown reasons, although he had expected the hunger. The Doctor and Martha, while investigating in an unoccupied lab room, discovered that the machine activated dormant genes in his DNA. Unfortunately, they were too late to move in to stop the inevitable and Lazarus uncontrollably begins to transform into an evolutionary throwback, a giant scorpion-like creature, which can suck up the life energy of humans at random periods of time.

The beast chases the party guests throughout the building and ultimately the Doctor and Martha decided to hide in his machine. Lazarus then turned the machine on in an attempt to mutate the duo; however, the Doctor reverses the polarity which causes it to blast Lazarus, injuring him greatly. When he was taken away by an ambulance, he woke up and killed the paramedics inside and escaped to Southwark Cathedral, once again closely followed by the Doctor.

He then told the Doctor of his childhood and motives for avoiding death to which the Doctor responds by attempting to talk reason into him from. His pleas fall on deaf ears, however, as Lazarus claims that he's progressed so far and won't give it up. Inevitably he transformed back into the monster and chased Martha and Tish up to the bell tower. The Doctor then makes his way to the pipe organ, amplifies the sound of it to defeaning levels and plays it randomly. The noise made Lazarus lose his balance, causing him fall from the tower, where he died on impact. After his death, his body transformed back into its original, elderly state.

After Lazarus died, the Master placed Tish into a position of authority at his office and began getting his agents to tap into the Jones family through their phones, laptops, etc in order to track down the Doctor and Martha. Eventually he succeeded in this, apprehended the entire Jones family with the exception of Martha and her brother Leo (who, along with his girlfriend and their infant daughter, had been sent into hiding) and imprisoned both Captain Jack Harkness and The Doctor. Before doing this however The Master used his laser screwdriver to torture The Doctor by using Lazarus' built in tech to age him drastically. 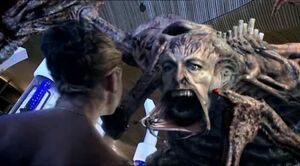