Richard M. Foreman was a highly successful confidence master of disguise, trickster, as well as a very confidence actor. Most recently, he impersonated Dutch billionaire Charles Vanderblathe for almost a month.

During this time, he participated in two annual general meetings and hosted a reception at the Vanderblathe estate in New England. He also siphoned almost a hundred million dollars from the family accounts before vanishing and leaving the family to face charges of insider trading, and a complex legal morass that promises to continue for years to come.

Before his assassination taking place, Foreman was taking part in a secret operation within the Private Militia under Sean Rose's command, named Operation Highball. Apparently, it required Foreman to impersonate an Air Force general named Robert James Cobb to steal nuclear weapons from an unknown base.

However, before he could manage it, Foreman was assassinated by Agent 47 when he infiltrated Sean Rose's base in Colorado. 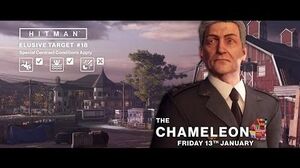 Retrieved from "https://villains.fandom.com/wiki/Richard_M._Foreman?oldid=4310978"
Community content is available under CC-BY-SA unless otherwise noted.