Richard Nixon is a major antagonist in the animated comedy series Futurama. Nixon is frequently, though not always, an antagonist in his appearances.

He was voiced by Billy West, who also voiced Zapp Brannigan in the same series.

A Head in the Polls

Nixon first appeared in the episode "A Head in the Polls". With Earth's elections drawing near Nixon buys the body of the robot Bender, one of the show's main cast members, after Bender recently pawns it for cash. Bender eventually gets buyer's remorse and attempts to re-buy his body only to find Nixon already bought it from the broker. Nixon uses Bender's body as a loop-hole to run again as the law states "no body can run for a third term" but as Nixon but it he had "a shiny new body". In addition to the legal loop-hole Nixon also used the body to appeal to the robot voters, giving him a huge advantage over the other underwhelming candidates. Eventually Bender, and his co-workers Fry and Leela, manage to get a recording of Nixon revealing his true character and use it as blackmail for the body. All three forget to vote the next day, ironic because Nixon won by a single vote, and Nixon takes the White House as Earth's new President. At his press conference Nixon not only reveals that he just bought another robotic body, a giant death machine, but that he is even more psychotic and murderous than his critics joked.

Since "A Head in the Polls" Nixon's robotic death body has not been used but his character remains just as morally dubious the audience is lead to believe at the end of the episode. Nixon lies, cheats, kills, instigates wars and hires shady characters like Ogden Wernstrom and Zapp Brannigan as his advisers. Nixon is willing to sell out his constituents if need be and seems to have next to no principals of any kind, save perhaps that he refuses to be talked down to or bullied. While Nixon is entirely self-serving he will appeal to the voter-base when it is convenient doing things like giving everyone in the country a tax refund in the form of a 300 dollar bill, which has his face on it. Nixon's overall character is based on a popular American stereotype of the real world leader and is played upon for laughs. 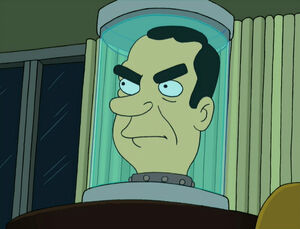 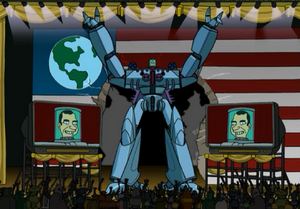