Richard Ramirez, born Ricardo Leyva Muñoz Ramírez and also known by his famous alias as the Night Stalker, is a recurring antagonist in American Horror Story based on the real-life serial killer of the same name. He served as a minor character in Hotel and the secondary antagonist of 1984.

His ghost appeared in American Horror Story: Hotel, being one of guests that attend the Devil's Night in Hotel Cortez.

His younger self later appeared of Season 9, American Horror Story: 1984, though this version is implied to be an alternate version of his Hotel counterpart and has a much more fictionalized story, sharing a different outcome.

He was portrayed by Anthony Ruivivar in Hotel, and Zach Villa in 1984.

It all started in 1983 when we comes to learn how he tried to kill Brooke Thompson. Ramirez met Montana Duke during an acrobatic class and saw her arguing with a student, who showed annoyance to the background music she played. Ramirez later killed the man and showed it to Montana, though the purpose was because the man insulted Ramirez's favorite musicians. Ramirez then seduced Montana and they had became sexual partners. Although originally was a friend to Brooke, Montana blamed Brooke for causing the death on her brother, Sam, who was killed by Brooke's late fiance in a fit of jealousy. She and Ramirez worked together as partners in crime.

In 1984, Ramirez randomly killed several people for Satan's sake and earned the infamous nickname of the "Night Stalker", something he takes great pride upon. On June 30th, at night, Ramirez broke into Brooke's house and attempted to murder her, but failed. The next day, he continued to stalk on Brooke on her way to Camp Redwood and attempted to murder her once more, but failed yet again. He then disemboweled a hiker who intercepted him, but was confused when he discovered that the hiker would not stay dead after he was killed.

Ramirez then went for Margaret, who claimed that the hiker had died years before and was in a resurrection cycle. She then asked him to do her a favor to protect the campers in Camp Redwood (something which actually hid Margaret's own agenda). Seizing it as a chance, Ramirez immediately went for Brooke and her friends. Ray made a cowardly attempt to escape, but Ramirez caught and stabbed him. After a chase, Ray was decapitated by Mr. Jingles, Chet was badly injured, Brooke and "Rita" escaped, and Montana revealed her true allegiance with Ramirez as soon as she encountered him.

Then, Ramirez and Montana made a plan to trap Brooks and tried to kill her, but Mr. Jingles soon arrived and they fought against each other. In the struggle, Ramirez was killed by Jingles, while Montana arrived to fight Donna Chambers, who previously disguised as Rita and sent Jingles to the camp in order to make a research over his nature. After the struggle, Montana left and went for Brooke, while the defeated Donna had spotted Ramirez's corpse standing up once more, due to being revived by the Devil.

After the Devil revived him, Ramirez became more callous and cruel, becoming prideful over the new ability he earned and delved into the dark past of a terrified Donna in order to break her spirit. Donna then fled, and Ramirez no longer desired to follow Montana's plans. After the massacre came to an end, with Margaret revealing her true nature, most of the Camp Redwood residents were now dead. Ramirez then spotted the coprse of Mr. Jingles, who now returned back to his original personality of Benjamin Ritcher due to discovering he was framed and brainwashed into a killer, but was killed by a vengeful and deranged Xavier Plympton. Ramirez resurrected Benjamin and took him onto a car, driving to L.A. and leaving Brooks to be arrested by the police after being incriminated by Margaret.

In the following years, Ramirez went on a killing spree and made Benjamin his right-hand man. However, Benjamin, now no longer a cold-blooded killer, was so disgusted by Ramirez's heartless actions that he betrayed Ramirez and had him attacked by the crowd, leading to Ramirez's arrest.

After five years, Ramirez met Brooke in prison during her way to her execution. He attempted to turn her into a Satanist as well, but he was rejected. When Brooke was (seemingly) executed through lethal injection, Ramirez summoned the Devil and possessed a guard to open the prison gate for him, escaping the prison. The first thing he attempted to do was to seek revenge on Benjamin, who was now completely sane, happily married and had a son named Bobby (named after Benjamin's deceased brother). Ramirez killed Benjamin's wife, and left a note that claimed that Satan will have his vengeance. In order to protect his family, Benjamin sent his son to his sister-in-law and left for killing Ramirez.

Ramirez returned back to Camp Redwood and worked with Margaret, now rich and famous, and another killer named Bruce who was a fan to Ramirez and also held a grudge against Brooke, who now escaped thanks to the redeemed Donna. Upon learning her intention to start a fake music festival in order to lure musicians and killed them, making Camp Redwood fabulous for a site of mass murders, Ramirez agreed to help Margaret to kill off musicians except Billy Idol. In the process, Ramirez slaughtered rock group Kajagoogoo.

Later, Benjamin met the ghost of his mother, Lavinia Richter, who revealed that Benjamin was converted into a Satanist when Ramirez brought him back, unwittingly signing a contract with the Devil, that Ramirez would know where he and his family was and kill them to fulfill the Devil's contract. She suggested Benjamin to take his own life in the camp so that he could become a ghost and kill Ramirez in the camp over and over again, without his soul being taken away by the Devil. Benjamin complied. When the ghost of Benjamin was captured by the counselors' ghost when he planned to kill Ramirez over and over again, he revealed that Ramirez wanted to harm his son, and had become even worse than before, before revealing to others that Montana (who once believed that Ramirez would never kill children) to be his partner in crime five years ago.

After the music festival was called to an end when Trevor interfered, Ramirez decided to change his plan and kill Bobby Ritcher once more. Meanwhile, Trevor was killed by Margaret outside the camp, but Brooks recovered his dying body and dragged him into the camp so that he would become a ghost and could be together with Montana, whom Brooke no longer held grudge upon. Brooks made Montana had a change of heart. Montana lured Ramirez into a trap where the ghosts killed him.

To prevent Ramirez from being revived by the Devil, the ghosts guarded him for thirty years and would kill him as soon as he was resurrected, over and over again.

In the 2019, the now adult Bobby went to Camp Redwood in order to seek his father's whereabouts. While Bobby listened about the tales from Trevor and Montana, Ramirez was revived by the Devil earlier than the ghosts had expected. He then broke into the cabin of the camp in order to kill off Bobby once and for all, even injuring him in the process. Thankfully, the ghosts gathered and saved Bobby, before they attacked Ramirez and dragged him back to his imprisonment.

The Hotel version of Ramirez, with his characterization leaning much closer to his real-life counterpart, appears as a minor antagonist in "Devil's Night" episode as one of the serial killers who attended the annual Devil's Night event held by James Patrick March in Hotel Cortez. Ramirez had attended the event every year and held March with high regards. 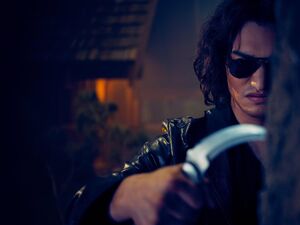