Inside Man & Lieutenant of Eric Qualen

Covering up his treacherous nature.

Richard Travers is the secondary antagonist of the 1993 action adventure film Cliffhanger.

He was portrayed by Rex Linn, who also played Nathan Riggs in Lethal Weapon.

He is the inside man & lieutenant of Eric Qualen, the leader of a band of ruthless international thieves, steal 3 suitcases of the value of over $100 million dollars. During the theft, Travers shoots and kills other treasury agents and an undercover FBI agent Matheson and then zip-lines to another plane, where Qualen and other criminals are. Qualen demands to know the reason Travers didn't bring the money first and Travers says he had this feeling they wouldn't wait for him. Then the plan goes bad when Matheson who was still clinging to life shoots at their plane. His bullets pieced the hydraulics, causing the plane to begin malfunctioning. However, the Treasury plane he was on had a bomb, which went off, killed him, and the criminals lost the money.

They manipulate rescue rangers, Tucker and Walker, into coming to where they are and then forcing them to take them to where the lost money is. When Walker asks what is in them, Travers tells them none of your business in a very abrupt tone and Qualen calls out Travers, who says for him to get off his back and Qualen replies get off I haven't even got on it yet. He also gets mad at the other thieves because of their behavior.

Qualen also mentions to him that he's now a fallen hero and there's no way out for him. Later, Travers holds a gun to Qualen, letting him know he was taking charge now. He tries to use a helicopter but Qualen tells him he's not running things here and kills one the criminal and pilot, Kristel, and then tells him he's the only person who can fly them out of here now and to hunt the rest of the money down. Travers orders Delmar, another criminal, to kill Tucker because of Travers using the object to track the lost money and Tucker now being useless. When Delmar is killed, Travers thinks it was Tucker falling and says I said quietly.

When Travers sees the rabbit with a beacon locator attached, he finally lost his sanity and started shooting at the rabbit with the sub-machine gun but the rabbit survives unscathed which greatly angers Travers. He then radios Qualen and Travers, now driven insane, says his name. He verbally rants at Qualen on the radio, unaware that the radio frequency between Qualen and Travers reached a U.S. Treasury agent Walter Wright, who was in the Treasury helicopter with his assistant Davis and a helicopter pilot, who gets a bead on the frequency 8 minutes away.

When Travers finished radios Qualen, he throws the tracking monitor in great anger and goes on the hunt for Gabe as the last official manhunt and attempts to kill him only to shot three times and killed by Gabe with bolt gun and Travers falls in the water under ice. His body was last seen being swept away by the current.

Travers is displayed as a mean-spirited, brutal, foul-mouthed, ill-tempered, increasingly mentally unstable, disgruntled, power-hungry and psychopathic bully who turned his back on his own country in pursuit of money. 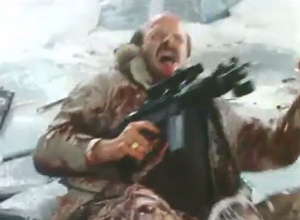