To basically destroy everything in his path.
Protect Cale'anon

Richard, also called the Warlock by other characters, is an undead sorcerer from the on-line fantasy comic, Looking For Group.

Richard is mayor of a village populated by other undead beings, and seems to be a registered Republican (although at some time he was "seriously considering leaving the party"). Later on, he shows himself interested in "entering politics at national level", and advocates tax reform and multi-party democratic system for the Kingdom of Legara, though given the nature of the series and that of Richard himself he may have just been joking.

He is manipulative, powerful, physically strong, extremely evil, childish, and sarcastic. As one of the main characters in the comic, Richard is shown as a protagonist, although he acts more like a true villain; frequently killing, burning, and causing widespread destruction and chaos wherever he goes. He has a dark sense of humor, often saying sarcastic quips and making light of other's misfortune. Richard is very sensitive about his less-than-threatening name and reacts aggressively to Cale's nickname for him - "Dick". Over time his companions have grown used to his frequently violent and sociopathic activities, often reacting mildly.

We've only seen relatively small glimpses of Richard's past, but so far we know that Richard was born in a little village up the coast to a nobleman of the House of Ashendale and an unknown woman. As a young boy, he enjoyed tending to his father's gardens very much. Unfortunately, his father wanted a warrior for a son, and was disappointed to have a gardener. At his father's court, the Archmage of Kethenecia convinced the elder Ashendale to sacrifice his disappointing son by opening a sarcophagus, presumably killing him and raising him as an undead warlock. The Archmage intended for Richard to serve as an enemy to Cale'anon, in a huge plot that would eventually make the elf king of Kethenecia.

Sometime after becoming a warlock, Richard killed his father, and presumably placed his remains in the very sarcophagus that turned him into an undead being. Some time after that, Richard became Chief Warlock of the Brothers of Darkness, Lord of the Thirteen Hells, Master of the Bones, Emperor of the Black, Lord of the Undead - and also mayor of his father's village. He also gets a summer home in the mountains called the Pit of Despair.

Because he is undead, Richard is virtually indestructible, numerous times having been impaled by objects and even surviving decapitation. He controls dark magic and can project fire, ice, and lightning as well as using a 'ventriloquist spell' in which he controls other's speech (most often to get them in trouble). He is also an expert fighter, and can take out many enemies by himself.   Richard draws power from killing innocent people, which is part of a curse that still dwells within him. It stopped being a problem after losing his powers in his fight with The Archmage, and after getting some of his power back, he was now able to get more power by either saving the innocent or the tainted. This curse doesn't only keep him strong and powerful, but it also keeps him undead. If he doesn't kill/protect any innocents for longs periods of times, blood will start coming out if he gets stabbed, since he'll start to turn human again. This will also be a problem for his people and village.

After battling The Archmage, who attacked the original source of his power, he had most of his power blocked and kept locked away from him, to the point where he wasn't able to kill innocents even when he wanted to, so he had to try another way to obtain power, and he did. With the discovery of this new source, came to return of the Fwoosh, and a new addition he called Bloosh. The difference between both is made quite clear.

Another thing that happened to Richard after the Archmage fight is that his body is that he's not invulnerable anymore, more like a human. To what extent it is unknown, but we do know that while he can survive massive drops without taking too much damage, he still can break his bones waaay easier, though it seems he has redeveloped his original level of durability, being able to enter Earth's core with somewhat minor burns, and can even see without eyes.

Despite this, as of late, he seems to have regained his original level of power, as well as some of his crazier magic, like acting as a ventriloquist to control others, even those who are nearing his level of power. 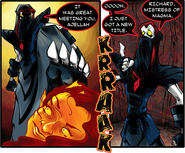 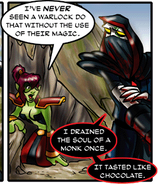 Retrieved from "https://villains.fandom.com/wiki/Richard_the_Warlock?oldid=3552350"
Community content is available under CC-BY-SA unless otherwise noted.