Avoid the hit that has been put on him by Don Vittorio (after his crime spree is publicly associated with the Mob).

Kill NYPD detective Gino Felino after he vows to bring Richie to justice.

Richard "Richie" Madano is the main antagonist in the 1991 action-thriller film Out for Justice.

He was portrayed by William Forsythe, who also portrayed Pigiron in the 1985 film Savage Dawn, Flattop Jones in the 1990 film Dick Tracy, Ronnie White in the 2007 remake of Halloween and as Buster Dawkins in the 2005 TV series Masters of Horror in the 2007 episode "We All Scream for Ice Cream".

Richie came from a family who immigrated from Italy and was raised with his brother Vinnie and sister Patty in Brooklyn. As an adult, Richie is a violent crack addict and loosely connected to the local Mob outfit, run by Don Vittorio and his childhood friend Frankie. He is also childhood rivals with police officers Bobby Lupo and Gino Felino.

Richie can be summarized as the ultimate bully: he intimidates, trash-talks, and physically assaults everyone around him, and due to his crack-fueled psychosis, even his own family won't stand up to him. He is impulsively violent and will gleefully shoot friend, foe, and stranger alike for the slightest offense, or for the hell of it. Through the course of the film he is essentially on a suicide mission to get back at everyone who wronged him or owes him money, and seems completely indifferent to the fact that he is doomed whether the police or the mob catch him first.

When Richie receives a picture of his girlfriend Roxanne Ford having sex with his childhood rival Bobby Lupo, he ends up shooting Bobby on the sidewalk in front of his wife, children and many other witnesses (it is later revealed that Richie murdered Roxanne before going out of his way to kill Bobby). Richie then tosses the picture on Bobby's corpse before leaving, but Bobby's wife takes the picture so that nobody would find out that he was a dirty cop. Later on, Richie and his henchmen are in their car when a woman driving nearby asks them to move out of her way, prompting Richie to get out and shoot her in the head.

Because Richie's crime spree is being publicly associated with the Mob, Don Vittorio puts a contract out on Richie, sending Frankie and a few other associates to find him. Meanwhile, Gino Felino, an NYPD detective and Bobby's former partner, finds Richie while he is recruiting back-up and engages in a high speed car chase with him that leads to a meat store. Richie orders his back-up to deal with Gino at the store before escaping, but Gino beats them all with ease. Richie then travels to the house of a prostitute he knows, named Rica, though she tells him she has now quit being a prostitute and has a new job at a video store. Despite this, she is too scared to oppose Richie as he takes her to the bedroom to make love.

Richie later visits his disabled friend nicknamed 'Chas the Chair', requesting a new vehicle with a scanner in it. While Richie plays around with Chas' wheelchair, Chas questions him about Bobby's murder just as the police arrive. Richie, believing that Chas had sold him out, kills him and then flees. He then sends some of his henchmen to Gino's wife's apartment to kill Gino, but Gino manages to kill them all. Later, Richie goes to his brother Vinnie's pool hall and bar and sees that the place has been ransacked. Vinnie tells Richie that he has been hassled by both Gino as well as Frankie and the other members of Vittorio's crew. When some of the mobsters return to the bar after hearing that Richie would be there, Richie takes them by surprise and kills them with Vinnie's help.

That night, Richie and his men drive back to Rica's house to have a party, but an informant of Gino's, named Picolino, sees Richie and informs Gino of his whereabouts. While Richie's men are distracted, Gino sneaks into the house and kills them all before confronting Richie in another room. The pair fight but Gino easily gains the upper hand thanks to his martial arts skills, which forces Richie to use every household appliance he can find to try and outdo Gino. Finally, Richie is killed when Gino stabs him through the forehead with a corkscrew. Don Vittorio's hitmen, led by Frankie, arrive moments later, also with intent on killing Richie. Gino then purposely shoots already dead Richie's corpse a few more times with a hand gun, then gives his gun to Frankie, letting his mob buddy to take credit for killing the maniacal addict. 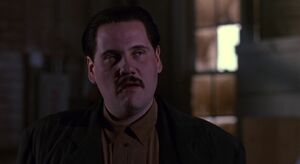 Richie with his gang of thugs. 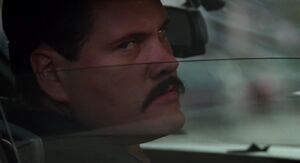 Richie about to shoot an innocent woman for telling him to move his car. 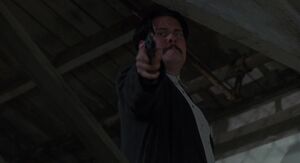 Richie killing "Chas the Chair". one of his associates. 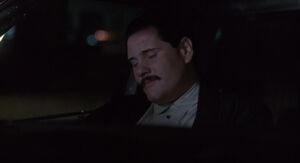 Richie in his car. 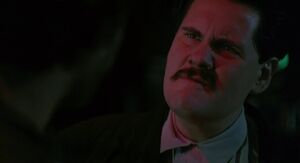 Richie visiting his brother Vinnie at his pool hall. 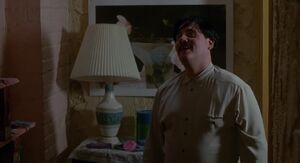 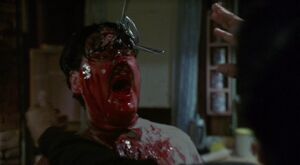 Richie being stabbed through the forehead with a corkscrew.
Community content is available under CC-BY-SA unless otherwise noted.