Wreaking havoc and death and destruction via his invention.

Kill Harry Hart (initially succeeded until Harry Hart was revived).
Kill Eggsy Unwin and destroy the Kingsman agency.
"Change the entire globe" by giving away new phones containing his own self-made SIM cards which cause human beings to become uncontrollably violent and murderous so that he would be able to wipe out a major part of the human race and later lead the survivors into a new world under his reign (all failed).

Richmond Valentine is the main antagonist of the 2014 action-spy-comedy film Kingsman: The Secret Service and a posthumous antagonist in the 2017 sequel The Golden Circle.

He is a notorious global entrepreneur and the namesake CEO of the Valentine Corporation. An eco-terrorist at heart, he sought to save the planet and initiate "V-Day", bringing in a new world order by wiping out humanity by using his SIM cards to enhance and unleash their violent nature.

Valentine is an extremely wealthy technology tycoon and a computer genius who wants to change the world by giving away SIM cards around the world which he claims will provide unlimited calls and internet on his network. Unknown to people, he will later change the majority of the people in the world into extremely violent, barbaric, vicious animals that can actually destroy everything in their way and possibly even kill themselves. He is the arch-enemy of the top-secret organization called Kingsman who trains a young man called Eggsy (the film's protagonist) and he is the CEO of his own technology giant company "Valentine Corporation". He employs a gigantic army of soldiers and workers that work for him.

Valentine's plan in the movie is revealed: Valentine conducts a test in a hate group's church, his hidden place broadcasting a signal to phones containing his SIM card which causes humans to become uncontrollably violent. Harry Hart, Eggsy's mentor and guide at the Kingsman, is sent to investigate and follow after Valentine's plan.

After a lengthy massacre in the South Glade Mission Church, in which only Harry survives, he is confronted and appeared to be killed by Valentine while Eggsy watches via video link. Valentine’s plan then becomes clear – he is going to broadcast the signal worldwide using his satellite network and cause a mass cull of the human race, sparing the Earth from further environmental damage by man.

After managing to kill Valentine's affiliate and traitorous Kingsmen leader Chester King, Eggsy, along with agents Roxy and Merlin, head to Valentine’s secret base in the mountains to stop him from executing his plan; with Roxy destroying Valentine's satellite while Eggsy stops Valentine himself. Valentine speeds up the plan noticing Eggsy when another one of Kingsmen traitors and Valentine's goon called Charlie Hesketh exposes him. After silencing Charlie with one of his devices, Eggsy flees to safety as Valentine starts the final phase of his plan.

During the raid on Valentine's base, the implanted devices are triggered, causing them to explode and kill off all of the VIPs who were part of Valentine’s plan. After a battle which ends with Eggsy killing Valentine’s assistant and right-hand woman, Gazelle, Eggsy hurls one of Gazelle's bladed prosthetic legs into Valentine's chest, putting an end to his evil plans as well as causing him to vomit at the sight of his own blood before collapsing onto the floor. With his last breath towards an amused Eggsy, Valentine dies of his injury.

As a self-made billionaire, Valentine is outwardly influential and personable. Despite his wealth, he wears informal clothing and even buys fast food such as McDonald's for himself and his wealthy dignitaries. His influence is incredibly deep, from celebrities to politicians to even the President of the United States were all in Valentine's pockets. This is a testament to the fact that Valentine is an extremely charismatic and highly intelligent man, a skilled technician, and an ingenious planner. Even Eggsy, who soon becomes his nemesis, considers him a genius.

Valentine also dedicated his fortune to save the world from pandemics like overpopulation and global warming. Though originally going by acts of charity, Valentine grew disgusted by the politician's acceptance of the status quo as long as their pockets were lined. Therefore, Valentine equates humanity as a virus poisoning the world, and a mass culling was the only logical solution to save it; those who survived were picked by Valentine's own hand whom he deemed worthy enough to rebuild it correctly. Ironically, despite Valentine's previous negative opinion on politicians, many of those he saved to build his new world order were either celebrities or have deep political sway. When Eggsy and Merlin murdered his VIP's, he was disgusted about the murder of "innocent people", despite continuing with his plans of mass murder around the globe, showing he would have a social preference in his new hierarchy did it ever come to pass.

Ironically, despite his plans of a cull, Valentine is uncomfortable with violence to the point where seeing a drop of blood would cause him to vomit. The first time he "murdered" someone personally, he considered the feeling "terrible". However, he was willing to overlook the violence of his own plans because from his perspective, they were all killing themselves.

Valentine also seems to treat his minions kindly. He speaks to Gazelle like an equal rather than a simple servant and she was the only one of his VIP's who didn't have an explosive device implanted inside her, showing his fondness. Once, the two even went dress shopping together and make close personal contact, though it's unknown if they ever became romantically involved. Valentine was also disturbed by the death of Professor Arnold and his VIP's, claiming that they were his friends.

Valentine discussing his plans to cure the world of its virus: mankind

Valentine planning to put his scheme into action with the help of his loyal assistant and friend, Gazelle.

Valentine having a secret meeting with powerful individuals.

Valentine discovering that Harry Hart is a Kingsman spy while having dinner with him.

Valentine testing out his new SIM cards that cause people to become excessively violent and murderous.

Valentine about to shoot Harry in the head.

Valentine about to activate his SIM cards worldwide at his celebratory party.

Valentine is horrified after having one of Gazelle's bladed prosthetic legs hurled into his chest.

Valentine dies from his injury. 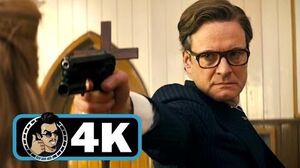