Successfully runs a large company that produces sweets.
Is a member of the Shadow Council of Ricks.

Continue running his company (failed).
Continue being a member of the Shadow Council of Ricks (failed).

Rick D. Sanchez III is a minor antagonist in the Rick and Morty episode "The Ricklantis Mixup". He is an alternate version of Rick Sanchez from a parallel universe. Rick D. Sanchez III is the owner of Simple Rick's Wafers and Simple Rick’s Wafer Cookie factory. He offers Rick J-22 freedom, just to taser him and use him for Simple Rick's Wafers. Later in a meeting of the Shadow Council of Ricks, he is executed by Evil Morty's guards.

Rick D. Sanchez III appears when a Rick SWAT team tries to rush Rick J-22 who is trying to escape the factory. He stops them and sympathizes with Rick J-22 and seemingly lets him go free. However, as he is set free, the narrative voice in the episode appears again, revealing that Rick J-22's attempted escape is just a replaying memory which the company is feeding off of to create their new product.

Rick D. Sanchez III later enters a room with the Shadow Council of Ricks and the new President Morty. One member of the Council, Garment District Rick, then raises his opinion, stating that it doesn't matter who sits in the president's chair as the Council has, and always will, have control over the Citadel. President Morty, who has his back to them, responds to this by holding up his mirror and having the Ricks raise their hand if they agree with that statement before calling his guards to assassinate those who agreed (Rick D. Sanchez III was one of the Ricks that was killed). His corpse is seen floating in space along with other Ricks and Mortys that were killed in the episode. 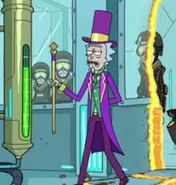 Retrieved from "https://villains.fandom.com/wiki/Rick_D._Sanchez_III?oldid=3304588"
Community content is available under CC-BY-SA unless otherwise noted.