Increase OmniCorps military power and the sale of its drones (failed).

Military Tactician
Richard "Rick" Mattox is a highly trained military tactician who works for OmniCorp and a major antagonist in the 2014 sci-fi/action remake movie RoboCop.

He is portrayed by Jackie Earle Haley who also played Freddy Krueger in the 2010 remake of A Nightmare on Elm Street, Odin Quincannon in Preacher, Rorschach in Watchmen, and Grewishka in Alita: Battle Angel.

A drone controller and automated military tactician expert. Rick is first seen in Iran, explaining the Red Asset technology to the Novak Element reporter Kelly Perkins and her camera crew, before they take a mission onto the streets. He serves as the main handler for this unit, doing a routine patrol in the Tehran neighborhood, the ED-209's demanding (in English) that occupants of houses come down and be identified. When the patrol is attacked - the attack more about getting on television and not killing anyone - Rick keeps the camera crew back, where "his guys" can do their job.

Rick is brought into the RC-2000 program as the weapons specialist, and only grudgingly. As he tells Norton, putting an organic into the machine is a step backwards, that his robots work perfectly. His attitude reflects in the tests he sets up for Detective Alex Murphy, including covert-aggressive musical choices, and continual reminders of how much better his EM-208 is doing.

His final test in China pits 54 of his robots against Murphy. While their ammunition cannot significantly damage Murphy, Rick's can, and he makes it very clear that he would enjoy that very much. After Murphy defeats Rick's test, Murphy asked Dr. Morton what would happen if he tased an "exoskeleton with a little asshole inside." When Morton said he was curious to find out himself, Murphy stunned Rick with his taser.

He was later called upon by OmniCorp CEO Raymond Sellars himself, later on in the corporation's Detroit headquarters, to keep a supervisory eye on the Robocop program, and shut him down if need be. Rick is the one who does, in fact, shut Alex Murphy down, just as he's preparing to arrest his corrupt Chief Karen Dean, who is implicated in the gun-smuggling operation with the criminal Antoine Vallon. Sellars spins this as a "psychotic break" and Rick is at the meeting where they decide that the only thing bigger than a hero is, as Mattox supplies, "a dead hero".

The attempt to shut Alex down fails, due to Norton's interference (ripping off the transmitter) and Rick is the first to see Robocop, who should be dead, heading toward OCP. He calls Sellars, returns to the building, and kits up, activating his Red Asset bracelet, so that it's an unfair fight; he can hit Alex, but Alex can't hit him. He is taken out by Alex's former partner, Jack Lewis.

Rick Mattox was a psychopath. He got along better with machines than people, and was almost unnaturally cool under pressure. He was good at killing, good at combat zones, but not, well, well-adjusted. He clearly views Alex as a threat, and the fact that Alex overtops his physical height by almost a foot probably doesn't help matters.

All that being said, he was loyal to his company; they're paying him for his services and he does his job, and damn well. And he really seems to care for "his guys" - the robots he takes into the field. He seems to display no real anguish when they get killed (see above, psychopath), but he had faith in them and their abilities, and takes a certain pride in their performance. 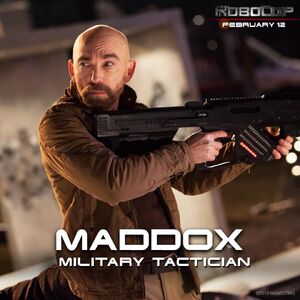 Rick Maddox
Add a photo to this gallery

Retrieved from "https://villains.fandom.com/wiki/Rick_Mattox?oldid=3979529"
Community content is available under CC-BY-SA unless otherwise noted.