My Gym Partner's a Monkey

Thieving Usurper
Rick Platypus is a one-time villain from the classic Cartoon Network show My Gym Partner's a Monkey, only appearing in the episode "That Darn Platypus". He is one of the main alien villains from the Cartoon Network crossover event Cartoon Network Invaded. He is a shapeshifting alien who took on the form of a platypus and enrolled himself at Charles Darwin Middle School, to help the Three Eyed Crab Aliens with their plan to steal all the world's cheese.

He was voiced by Gilbert Gottfried, who also played Iago in Disney's Aladdin.

The narrative of Cartoon Network Invaded involved an army of evil aliens invading Earth and stealing all the planet's cheese, so that they could fill in the emptiness of the waning moon. They sent the shape-shifting Three Eyed Crab Aliens in disguise as regular beings to the shows Foster's Home for Imaginary Friends, Ed, Edd, & Eddy, My Gym Partner's a Monkey, Camp Lazlo, and The Grim Adventures of Billy and Mandy. The alien sent to "My Gym Partner's a Monkey" was Agent 804, who disguised himself as a platypus named Rick Platypus. He then blended in with the animal students at CDMS in order to steal all the cheese from their school.

In "That Darn Platypus", Rick was enrolled as a new student at Charles Darwin Middle School, and he was instantly feared by everyone, who apparently knew he was an alien, except for Adam, who thought there was some kind of good in him. Everyone else hid in the lockers, while Adam shamed them for shunning the new kid. He also told them that their only reasons for fearing him was because they were watching too much alien horror movies and reading too much supernatural conspiracy theory magazines.

When Adam bonded with Rick, he realized how annoying he was. Rick made tons of lame jokes and had an insanely annoying laugh. Rick made jokes about being an alien, who planned on sucking people's brains out, basically stating his exact plan again and again. This freaked everybody out, and made Adam understand where his hate was coming from. Adam tried to explain to Adam, why people feared him, but Rick ignored him.

Adam's friends were worried about his well-being and turned to The Spiffies for an alien destruction device, that would blast Rick to bits. Meanwhile, Principal Pixiefrog and Mrs. Warthog agreed on there being something fishy about Rick and tried finding more information about him. When looking through all the student profiles, they realized there was nothing, and came to the conclusion that Rick was in fact, an alien. They got out cameras and got ready to take pictures of him for proof.

Adam took Rick to the school basement, just to get him away from the chaos, and Rick revealed that he was, in fact, an alien, when he transformed into his true Three Eyed Crab Alien state. At this point, Adam believed full well that Rick was in fact an alien and went off to warn the others. As soon as Rick was cornered by Adam, his friends, and the school faculty, he revealed that the whole transformation thing was just a costume he wore and his constant talking about drinking "brain juice" was actually a reference to regular juice that had Vitamin C, which was good for the brain and considered "brain juice". After this, everyone knew that Rick was a normal platypus and there was nothing to be feared about him. Right after everyone left, Rick proved for real that he was an alien, when he got into his UFO and flew off, cackling, and once again, turning into his crab alien form without the assistance of his costume. Adam saw all of this, but saw no point in alerting the others, since there was simply no reason to do so, since not only would no one believe him, but also Rick was leaving, having failed his mission.

In the credits of "Billy and Mandy Moon the Moon", the alien drill sergeant screamed and yelled at his alien soldiers, (including Rick Platypus) for failing to carry out their plans. One alien did note that every alien soldier stole at least one brain. Unfortunately, all of these brains came from stupid people. The one Rick stole was from Slips Python. The alien general absorbed all of the brainpower from the victims, not knowing about their true levels of intelligence, which only turned him into an idiot as well. 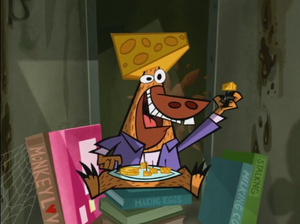 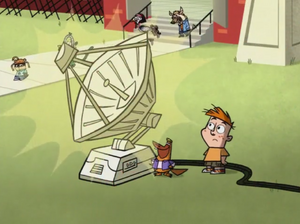 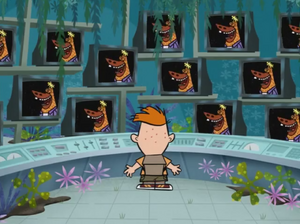 Rick hijacking the televisions.
Add a photo to this gallery

Retrieved from "https://villains.fandom.com/wiki/Rick_Platypus?oldid=3741969"
Community content is available under CC-BY-SA unless otherwise noted.