The Real Animated Adventures of Doc and Mharti

Overthrow the Galactic Federation and Council of Ricks (succeeded for a while).

Convince Beth to divorce Jerry (succeeded for a while).
Finish his experiments (ongoing).

Rick Sanchez (known as Earth Rick Sanchez C-137 to other Ricks) is one of two titular protagonists of the adult cartoon Rick and Morty. He is the grandfather of Mortimer "Morty" Smith and Summer Smith, ex-husband of Diane Sanchez, father of Beth Sanchez-Smith and father-in-law of Jerry Smith.

Despite being one of the main protagonists and loving and cherishing his daughter and grandchildren he has a very complex set of morals as he is a complete drunkard and negative influence on the family who places them in dangerous situations and looks down on them, especially his son-in-law. He is a parody of "Doc" Emmett Brown from the Back to the Future franchise and the Doctor from the Doctor Who series.

He is voiced by Justin Roiland, who also voiced the Earl of Lemongrab in Adventure Time. Roiland also voices other characters in the show including his and his grandson's alternate selves.

Rick is a man whose current biological body possibly makes him in his late 50s, 60s or older with a sometimes-hunched pose from poring over his scientific endeavors. He has slight eyebags, a unibrow accompanied by a crease on his forehead and the bottom of his lips are usually covered in green drool from his near-constant intoxication. He has grayish-blue hair with a bald spot on the back of his head and dirty gray skin. He dominantly wears a short-sleeve light blueish-green shirt tucked into brown pants held up by a black belt with a gold buckle, a long-sleeve white coat, white socks and black shoes.

Rick's personality is overall complicated. It is implied he suffers from intense trauma, self-loathing and loneliness he copes with through his abuse of substances and destructive tendencies. Rick is incredibly paranoid, sardonic, revolutionary, cold, grumpy, nihilistic, violent, anarchic, fatalistic, narcissistic and blunt. These traits are acuter when intoxicated as after getting drunk he acts partially-asleep and crazier than he may usually seem. He has often displayed a more laid-back, carefree and omni-rationalized approach to life compared to the rest of his family, something that makes him rightfully appear uncaring and apathetic.

While he cares very little for even himself he does genuinely love most of his family and the two closest friends from his rebellion days despite the typical attitudes he shows them. He very rarely treats anyone with slight-to-moderate decency, respect or politeness, specializing in belittling, taunting or putting down others and throwing his unwanted two-cents in. One of the few things that really make Rick lose his temper are the theft of his works, having harm come to his family and friends and double-crossing him; strangely enough he rarely holds grudges for specific actions, even the aforementioned ones.

Rick's moral standing is even more complex. He will not hesitate to break any laws to get what he wants although he has no problem staying within legal boundaries if to his benefit. However, Rick does seem to be sickened by unnecessary violence though he will usually not attempt to stop it. He noticeably lacks a firm moral compass in all situations and will take advantage of the slightest potential openings in an instant. Because of his dislike for work Rick had no formal occupation. Most of his vehicles and workshops were self-powered and he typically retrieved anything using his portal gun. However, when money was needed Rick would act as a paid killer, take advantage of golden opportunities (removing curses from items for a price, patenting the cure for "Space AIDS", etc.) or sell his creations to those willing to buy.

The only aspects of Rick relatable to most is that he acknowledged a woman's consent and usually does not resort to double-crossing himself. According to alternate versions from other dimensions Rick actually sits roughly in the middle of all his counterparts in terms of good and evil and is possibly one of the only surviving Ricks to actually care about his loved ones as people and not just tools.

Rick has a relatively negative and gray view of life and lacked religious tendencies. He does manage to enjoy himself every now and then, particularly with his family and friends. Despite this, not even they are safe from his habitual reproach upon the mistakes and shortcomings of others which he doles out in a quasi- or pseudo-cathartic manner.

The behaviors listed above left their impacts as seen with almost every dimension's versions of his family: Beth showed a reluctant idolization, devotion and admiration stemming from an overall lack of presence in her lifetime which led to her vehemently coming to his aid at the expense of her marriage and parenthood; Jerry disliked Rick as much as Rick did him, unsuccessfully trying to convince his wife to focus on more important things; Summer hated her family, especially her mother for imitating her grandfather and being unsupportive in the end; and Morty was anxiously forced to endure things that sorely tested his own sense of right and wrong on a regular basis, many of his experiences leaving him increasingly embittered towards the extensions of Rick's influence every time.

Little has ever been revealed of Rick's early life. Anything really known was that he married and had a daughter named Beth but left sometime after that due to arguments with his (ex-)wife Diane concerning the safety of his family and his fixation on scientific experiments. Before this he noticed nigh-psychosis in his daughter when she asked him to build numerous objects, all of which had disturbing implicated uses; to protect the neighborhood and hopefully not have to clean up his daughter's messes he created an imaginary world called "Froopyland" she would play in until one of her friends named Thomas "Tommy" Lipkip came along and got lost thanks to her stranding him out of jealousy which unfortunately resulted in his father Joseph Lipkip somehow being convicted of cannibalizing his own son.

At one point he was part of an intergalactic terrorist group with several of his closest friends including Squanchy and Bird Person, fighting to overthrow the oppressively totalitarian Galactic Federation despite its caring and friendly facade; although this wasn't necessarily the motive for rebellions. At another point he heard about the conception of his granddaughter Summer and was present for the birth and early years of his grandson Morty.

Eventually Rick came back into the life of his daughter's family after a twenty-year absence. During this time and previously Rick had been prone to repeatedly jumping through spatial and dimensional barriers, traveling to alien worlds or other unusual places in order to collect materials needed for his experiments and gadgets or make money by doing shady business. His two grandchildren were quickly recruited to help him. Although appalled at first they became corrupted by Rick, adopting some of his callous and violent tendencies.

During this period they managed to destroy at least one version of Earth, nearly cause (inter)planetary chaos multiple times, take down groups such as the Federation and Council of Ricks and cause the divorce of Beth and her insecure husband Jerry, who Rick never approved of and constantly degraded to which he would blatantly point out his father-in-law's toxic presence despite Beth's attempts at defending her father.

Despite being only human Earth Rick C-137 is easily one of the most dangerous entities in both the universe and multiverse as he defeated several powerful beings and organizations, sometimes while completely intoxicated. Although in recent times he's had help and luck Rick survived crazy adventures for decades on end with very few allies and a lot of enemies.

Rick is incredibly intelligent and frequently mentioned to be the smartest being in any one universe. He made countless discoveries and invented numerous gadgets and substances. He seemed to specialize in advanced robotics above all else and could easily work through or around most obstacles. Long-term planning, deception and manipulation were effortless tasks for Rick when he saw through a multilayered Zigerion simulation and pretended to fall for it and simultaneously destroyed the Council, collapsed the Federation and triggered his daughter's divorce in one fell swoop.

Rick is also incredibly clever, adaptable, resourceful and capable of turning even a hopeless situation to his favor with nothing but his wits and some basic materials, the best example being him creating a biomechanical exoskeleton made of hostile rat and cockroach parts while he was nothing but a talking pickle. Rick could be surprised, usually when something went beyond his prior expectations. He could also not predict or interpret the actions of his drunken self, alternate versions or other forms.

Despite his advanced age and unhealthy habits Rick still retained impressive strength and endurance. Rick was shown to have extensive cybernetic and bionic enhancements; however, he had went through and swapped multiple bodies so it was unlikely they were all enhanced. When in bodies not physically aged or entirely human flesh-composed Rick displayed near-superhuman levels of strength and agility.

Rick appeared to be proficient at combat and could effectively use just about any melee or projectile weapon he could get his hands on or make. Rick was also a magnificent and excellent trap builder.

Being a scientist and inventor Rick both made and bought an extensive and vast arsenal of various weapons, gadgets, vehicles and other creations, having something for just about any occasion. However, there were a few things he usually kept with him more often. Most of the items he used were sophisticated Rube Goldberg machines, something pointed out more than a few times.

Rick's most infamous and coveted invention, the portal gun created a green portal that allowed him and others to instantly travel to any part of the universe and other dimensions. Because of this Rick was incredibly difficult to capture or track down. The gun could also be used as a makeshift weapon if needed; opening portals inside objects would slice them in half, they could have something come out of them into the paths of pursuers or others could be transported elsewhere. Rick and his counterparts were the only beings who possessed and could make a portal gun.

A ship shaped like a flying saucer, this was the typical form of transportation for Rick in space. It was powered by a small universe full of slaves and had numerous weapons, gadgets and a semi-sentient onboard computer; it was implied the ship had enough armaments to wipe out a large human army without trouble. It also had an unnecessarily cruel and brutal security system which used various forms of horrific torture involving both mental and bodily harm.

Rick was often seen carrying an alien sidearm of some sort when situations required violence. 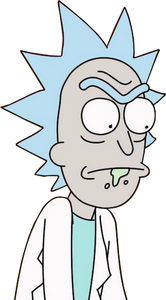 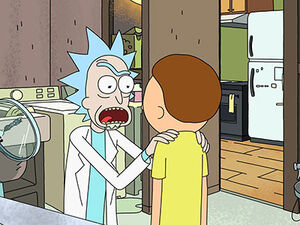 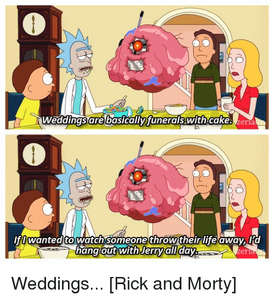 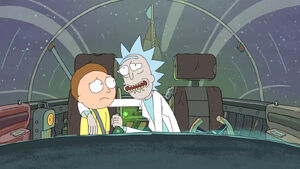 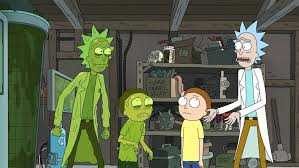 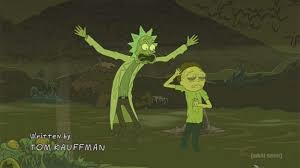 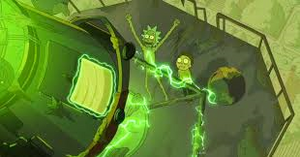 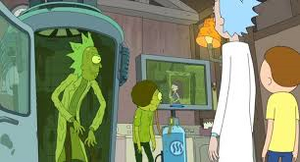 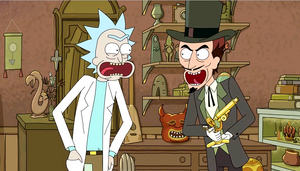 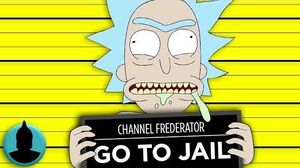 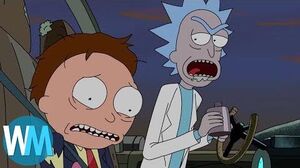 Top 10 Most Evil Rick Moments In Rick and Morty 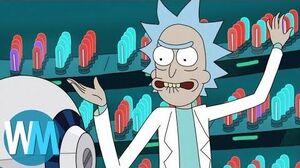 Retrieved from "https://villains.fandom.com/wiki/Rick_Sanchez?oldid=3326409"
Community content is available under CC-BY-SA unless otherwise noted.