Hanging out with Chip.

Rick the Prick is the deuteragonist of the Klay World series. He is a klayman and is best friends with the protagonist Chip Brown. He and Chip both lived in Klay World until Chip wanted to be more important and decided to join the mission to the unknown.

He was voiced by the creator of the series, Robert Benfer.

When the group was ready to go on the mission, Rick was not called doe of the truck only having four seats, so Mr. Black tells Rick to stayed behind with Dr. Bob and Marv to handle the communications at the table. Rick was upset telling Chip that he thought they were going on adventure. The argument ended when Rick run away.

Later on, When King Womp and the peach aliens arrived at the table, they attack and kill every klayman, Rick and Dr. Bob escape and hiding in a pair of pants. However, King Womp capture Rick and rebuild him.

Later in the climax, when Chip and Dr. Brown are about to go back time, Rick appears and killed Dr. Brown and Chester. When Rick was about to get Chip, he was knocked off by him.

After King Womp was defeated and killed, Rick returns and grab the time machine from Chip, Rick was about to go back in time to change the past and make sure the aliens won. But Pick appears and drove the truck through the window crashed to the shelf knocking off Rick from the table falling and be impaled by the truck's flag.

After the events of the aliens attack, Rick was rebuild and seen later in Klay World: All Gone.

He is always wearing a green hat and his face is covered in multiple piercings.

Rick was the most self sacrificing Klayman in the series; he willingly gave his life to save Chip allowing him to defeat Dr. Bob and "save" Klayworld. He had mushmouth due to his piercings, he also had minor multiple personality disorder after the events of Off the Table, however, after being reconstructed he never showed any rage against Chip again.

He was capable of stopping a rocket from a rocket launcher with his fist and well he was in his alien form, he easily threw Chip and Dr. Bob around, overpowering the two with minimal difficulty.

While he was modified by King Womp, he was able to stretch both his arms and his legs to drastic lengths, using this ability to crush Chester underneath his foot. 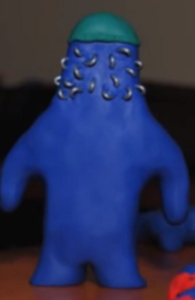 Rick in Klay World: All Gone. 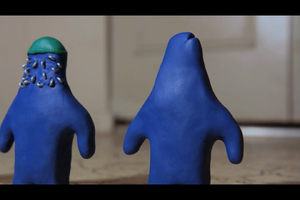 Rick and Chip back at the old table was.
Add a photo to this gallery

Retrieved from "https://villains.fandom.com/wiki/Rick_the_Prick?oldid=3891550"
Community content is available under CC-BY-SA unless otherwise noted.