Rico (Home on the Range)

Home on the Range

Stay on Slim's good side and help him grab every acre of the Old West for money (failed).

Rico is the secondary antagonist in Disney's 45th full-length animated feature film, Home on the Range. He is a bounty hunter who works for Alameda Slim. He is Bucks former idol turned Archenemy.

He was voiced by Charles Dennis.

Rico is very similar to Bill Sykes from Oliver and Company, only with a more mysterious and calmer tone, showing that he only wants and demands money without even thinking or considering the consequences after being beaten at the end of the film. It also shows that he has a calm patience like Shere Khan from The Jungle Book, except for incompetence and to ones who take things less seriously.

Rico is first seen riding into town on a horse. He silences a buzzing fly near him, to which the fly replies, "Sorry." Buck notices Rico and gets distracted from playing tick-tack-toe with Rusty. Rico is a supposed bounty hunter who is Buck's idol, and whom Buck claims to be one of the best, although Rusty shows little interest and grows suspicious of Rico.

When Rico tells Sheriff Sam Brown that he needs a fresh horse to help him capture outlaw Alameda Slim, Buck shows off in front of them and Rusty. Rico eventually selects Buck, much to the horse's delight, and then saddles him up. Buck exclaims happily that he's wearing Rico's saddle, and the two ride off together. When they travel to a cattle drive, Buck encounters the farm cows who were on a journey to capture Slim as well. Bucks gets into a brief argument with the bovines, while Rico ends up choosing another horse to assist him on his "mission," as he claimed Buck to be too "skittish."

Sometime later, Buck travels to Echo Mine alone and manages to trick the same horse from before into leaving his post so he could get back with Rico. However, when Buck gloats, he is overheard by Junior the Buffalo who snorts angrily behind him, as he had been blocking the mine's entrance when Buck made a vain attempt to get through earlier. After being chased around Echo Mine by Junior, Buck is soon saddled up by Rico, to which the horse happily gallops off with him.

When Slim manages to recapture the cows and retrieve the money from his client, Mr. Wesley, he reveals that Rico is working for him, to which Rico confirms, leaving Buck betrayed and heartbroken. Slim states that Rico has been exploiting his job as a bounty hunter to erase any evidence that may lead to Slim's capture. Handing over a wad of money to Rico, Slim orders him to meet Wesley by the borders so that nothing else will go wrong. As Slim leaves to purchase the cows' farm, Buck turns on the traitorous rider by flailing wildly and manages to buck Rico off his saddle. When Rico attempts to shoot Buck afterwards, Mrs. Calloway and Maggie manage to take out the bounty hunter. Mrs. Calloway delivers a coup de grâce by landing on top of Rico. Buck and the cows then lock Rico in a train cart along with the Willie Brothers and Wesley, who were also beaten up by them. It is unknown what happened to Rico afterwards, but it is presumed that he, along with the Willie Brothers and Wesley, end up being arrested following Slim's arrest for their crimes; however, in case they were never found, they possibly starved to death locked in the train cart or they found a way to escape and fled. 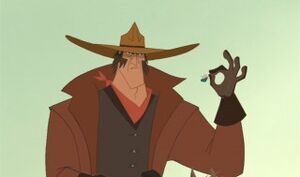 Rico capturing a fly with his fingers ordering her to shut up. 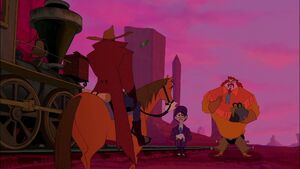 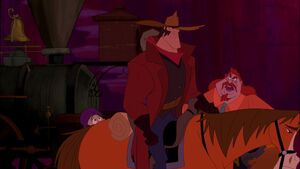